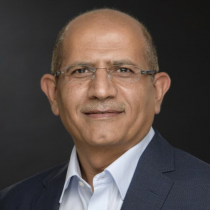 Nabeel I. AlAfaleg is the President and CEO of Aramco Americas, the U.S.-based subsidiary of Saudi Aramco, a global leader in integrated energy and chemicals. In this role, AlAfaleg will oversee Aramco activities in the United States and help drive company strategy and growth.

AlAfaleg has more than three decades of experience in oil and gas, has authored technical papers about petroleum engineering, and received awards for his service to the industry.

Prior to his current assignment, AlAfaleg served as Aramco’s General Manager of International Gas overseeing gas investments outside Saudi Arabia. He also held the role of Acting Executive Director of Community Services managing the company’s in-Kingdom business and residential assets.

Previously, he acted as Senior Vice President of Operations and University Relations at King Abdullah University of Science and Technology (KAUST). Before that, he was Chief Petroleum Engineer for Saudi Aramco, where his responsibilities included development strategies, reservoir management, reservoir engineering technical support, and facilities planning. Prior to that, he was acting Vice President of Finance and Operations at King Abdullah Petroleum Studies and Research Center (KAPSARC) in Riyadh, an energy and economics research center. AlAfaleg also served as acting manager of EXPEC Advanced Research Center, Aramco’s award-winning upstream research arm, and manager of reservoir management departments.

In service to the energy industry, AlAfaleg spent several years on the program committee at the World Petroleum Congress (WPC). He has co-chaired several international conferences, including the International Petroleum Technical Conference and the Middle East Oil & Gas Show & Conference, spoken on panels, and delivered keynote speeches at various technical events. AlAfaleg received a Distinguished Service Award for his contributions to the Society of Petroleum Engineers (SPE) where he is a longtime member. He has authored and co-authoredtechnical papers. In 2021, he received the Distinguished Alumni Award from the University of Southern California’s Mork Family Department of Chemical Engineering and Materials Science.