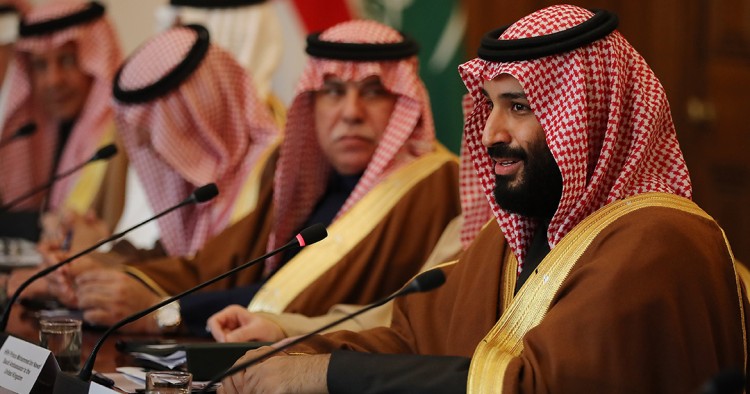 Saudi Crown Prince Mohammed bin Salman is on an official visit to the United States this week. The visit will last almost three weeks and include meetings with American political leaders, including President Donald Trump and congressional leaders from both sides of the aisle. In addition, the crown prince is scheduled to hold talks with business and technology leaders in New York, Boston, San Francisco, Seattle and other cities. Crown Prince Mohammed will likely showcase the business and investment opportunities that have opened up recently in Saudi Arabia as a result of Vision 2030, a broad and ambitious package of economic and social reforms that he unveiled in 2016. However, if his recent visits to Egypt and the United Kingdom are any indication, the crown prince will also highlight another aspect of Saudi Arabia: its values.

In the United States and the West in general, the kingdom’s values, especially as they pertain to religious beliefs, are primarily seen through an outdated and inaccurate lens. Critics maintain that the kingdom applies an “austere” brand of Islam, pejoratively referred to as Wahhabism, and that it “exports” this religious conservatism to the Islamic world and beyond through the academic and religious institutions it funds. Detractors have tried to link these institutions to the spread of militancy and the growth of terrorist groups in the Islamic world. Such a perception is in dire need of a corrective.

For many years, the conventional wisdom in Washington has been that Saudi Arabia and the United States share common interests but that they adhere to a completely different set of values. While that might have been the case when the relationship first began some 80 years ago, it is not the case today. The truth is that the kingdom, going back some ten years, has taken many important measures toward two related but somewhat different ends. The first has been a multi-pronged campaign to discredit extremists and terrorist groups on religious grounds by exposing their brutality. The second has been an effort to actively propagate a narrative that says that Islam is, at its core, a religion that promotes peaceful coexistence, moderation and toleration.

The kingdom’s counterterrorism efforts are well documented. Numerous high-ranking officials in current and previous U.S. administrations have commended the Saudis’ role in countering violent extremists. A few weeks ago, I asked a former senior CIA official at a speaking engagement how he would describe U.S.-Saudi cooperation in the field of countering violent extremists, and his one-word answer was “superb.” Last year, the outgoing director of the CIA and current nominee for secretary of state Mike Pompeo decorated the former Saudi minister of interior with the George Tenet medal in recognition of the kingdom’s leading role in counterterrorism.

What is less known are the various measures Saudi Arabia has taken to promote interfaith understanding and dialogue. In November 2008, the kingdom sponsored a major interfaith conference at the United Nations that brought together religious leaders from many different faiths to stress the fundamental tenets they share. In 2009, the late King Abdullah met with Pope Benedict at the Vatican. In 2012, the kingdom helped establish the King Abdullah bin Abdulaziz International Centre for Interreligious and Intercultural Dialogue (KAICIID). In 2016, King Salman met with Coptic Pope Tawadros II when he visited Egypt. These were important measures that sent a powerful signal to Muslims and non-Muslims around the world that followers of different faiths must stress the values they share, not their differences.

It is Crown Prince Mohammed bin Salman, however, who has spoken most candidly about the need to “crush” extremists of all sorts and how Saudi Arabia must go back to the “tolerant” Islam it knew for much of its history. In media interviews, including one recently aired by CBS’ 60 Minutes, Crown Prince Mohammed acknowledged that some Saudi institutions had been misused by extremists, who were emboldened by the tumultuous political events in the region in 1979. Going forward, he has made it clear that Saudi Arabia will eschew all brands of extremism. While in Cairo, Crown Prince Mohammed made a very public visit to the headquarters of the Coptic Church and met with Tawadros II. A few days later, he met with the archbishop of Canterbury in London.

Inside the kingdom, the education ministry has embarked on a comprehensive project to revise its curriculum and to make sure that it does not contain any material that encourages extremist or intolerant views. This effort has also entailed retraining—and in certain cases, dismissing—teachers and mosque imams who espouse extremist views.

The kingdom has also created several institutions that corroborate the doctrinal underpinnings of “moderate” Islam. That includes the Global Center for Combating Extremist Ideology, which was inaugurated during President Trump’s visit to Saudi Arabia in May 2017. This and other centers are expanding beyond exposing the false narrative of terrorist groups. They have delved into the finer and more complex points of theology, exegesis and jurisprudence, all with the understanding that Islam is not only rooted in moderation but that it embraces its doctrinal diversity.

As the birthplace of Islam and the location of its two holiest sites, Crown Prince Mohammed understands the weight that Saudi Arabia carries in the Muslim world. He is a man who has learned from the mistakes of the past but has his sight firmly set on the future. The U.S. and the West should take note of the fundamental social changes taking place in Saudi Arabia and support Crown Prince Mohammed in implementing his “Vision.” His success will be good for Saudi Arabia, the United States and the world. Just as importantly, it will be bad news for extremists of all kinds.