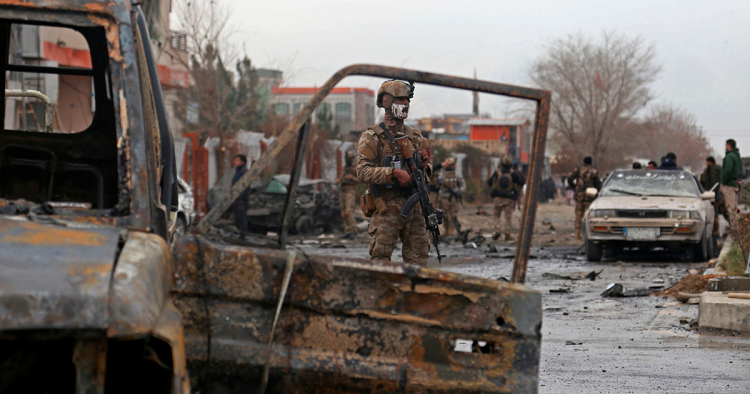 Peace talks between the Kabul government and the Taliban resumed in Doha on Jan. 5 amid a sharp resurgence in violence and controversy over a video shared on various social media platforms by pro-Taliban elements.

So far the intra-Afghan talks have shown no signs of progress even as the security situation in Afghanistan has deteriorated in the face of nearly non-stop terror attacks by both the Afghan Taliban and Islamic State-Khorasan Province. According to the United Nations Assistance Mission in Afghanistan, more than 2,100 civilians were killed and over 3,800 wounded in the first nine months of 2020, and things have only gotten worse since, with Washington accusing the Taliban of carrying out a recent wave of high-profile assassinations.

Controversy has also arisen over a video circulating on social media in which the Taliban’s deputy leader, Abdul Ghani Baradar, acknowledges that all decisions relating to negotiations are taken following consultations with its leadership council based in Pakistan. The footage was recorded during a three-day visit to the country in mid-December 2020, when Baradar headed up a delegation for talks with Pakistan’s foreign minister, Shah Mahmood Qureshi, and prime minister, Imran Khan. While the news came as little surprise, Islamabad has long denied reports that the Taliban’s top leadership is based in the Pakistani cities of Quetta and Karachi. During his meeting with Taliban fighters in Karachi, Baradar was heard saying that wounded fighters were sent to Pakistan as it was not possible for them to be treated in Afghanistan.

Responding to the circulation of the video, the Afghan government criticized Pakistan’s double standards on its role as a mediator in the resolution of the Afghan conflict, with the Foreign Ministry issuing a statement saying that the presence of “insurgent elements and their leaders in Pakistani territory clearly violate Afghanistan’s national sovereignty and continue to cause crisis and instability in the region, posing a serious challenge to achieving sustainable peace in Afghanistan.” The Afghan government was aware of the delegation’s visit, but Kabul asserted that while it had initially raised hopes for bringing about a sustainable peace in the country, the disclosure of the presence of Taliban leaders on Pakistani territory undermined the prospects for constructive negotiations and a reduction of violence.

As the intra-Afghan talks resume, they are still grappling with many of the same ambiguities as when they were first conceived. In effect, the negotiations are premised on the belief that direct dialogue would build rapport and reduce the mutual distrust between the two sides. Under normal circumstances, this might seem logical provided there are only two dominant individuals making decisions of consequence. This is, however, not the case with the intra-Afghan talks, where there are many influential persons and groups on each side, as well as a number of external players that cannot be ignored, chief among them Pakistan.

The latest round of peace talks is being held in Doha, notwithstanding President Ashraf Ghani’s ongoing efforts to shift the negotiations to Afghanistan. Ghani was keen to hold the next round of talks in southern Kandahar, the birthplace of the Taliban, a suggestion that the group firmly rejected. Though both sides have reached an agreement on the rules and procedures for further talks, that is hardly a big breakthrough. In fact, the Taliban and the Afghan government have yet to finalize an agenda for the negotiations. Indeed, substantive issues such as a power-sharing arrangement are not even on the table. Amid an atmosphere of violence and suspicion, the likelihood that negotiating teams will be able to conclude a final political settlement in the first half of 2021 seems very small. The lack of compromise by the Taliban, which continues to maintain a confrontational posture, has only compounded the impasse. New approaches are required to overcome the entrenched barriers.

The Taliban cannot scale back its terror attacks without losing its leverage in the negotiations, and its attempts to seize power militarily are driven by its “dangerous mindset,” according to Hafiz Mansour, a member of the Afghan negotiating team. There are very real concerns about the potential for uncontrollable chaos, and a hasty U.S. withdrawal would only make things worse. It could even trigger a civil war along the lines of the one that followed the Soviet withdrawal in 1989. While U.S. President-elect Joe Biden has not made it clear what he thinks about the withdrawal of American troops from Afghanistan, on the campaign trail he often underlined the need for the U.S. to reassume global leadership and work with allies to promote democracy and human rights. This suggests at a minimum he will not be as transactional as his predecessor.

Although there seems to be no consensus among regional countries as to who should rule Afghanistan, there is widespread recognition of the need for a truly representative and stable government in Kabul. This is not universal though and for its part Pakistan wants to see a pliable regime in Kabul so it can influence Afghanistan’s foreign and security policies as part of its pursuit of “strategic depth.” While Islamabad has facilitated peace talks between Washington and the Taliban, which culminated in the Doha agreement in February 2020, the recent visit of the Taliban negotiating team to Pakistan makes it clear that both sides are keen to expand their cooperation from an operational level to an institutional one.

There is no doubt that the situation in Afghanistan would become far worse without a deal with the Taliban. But as long as the Afghan Taliban is unwilling to step back from its maximalist position on the cease-fire issue and refuses to fulfill its commitment to denying al-Qaeda a safe haven, the threats to regional security will only multiply. Other issues abound as well, among the most prominent of which is women’s rights. Nowhere have women been treated so poorly in the modern world as in Taliban-ruled Afghanistan.

A Trump-dictated full withdrawal of American forces without a truce among Afghans will have fatal consequences for the entire region. Biden is supportive of the negotiated settlement with the Taliban to end the Afghan war, and as vice president he pushed for a smaller troop presence in Afghanistan than many other officials around him, but he also seems to favor retaining a counterterrorism-focused mission as a total American withdrawal could breathe new life into the complex jihadist landscape. Complicating President-elect Biden’s decision, however, is the Taliban’s failure to fulfil several key conditions of the Doha deal, particularly the pledge to prevent al-Qaeda from operating on Afghan soil. Nevertheless, there seems little possibility that the Biden administration will unilaterally abandon the deal as it would only undermine the reconciliation talks with the Taliban.

Whatever approach Biden adopts will be necessarily imperfect, and this reminds us once again that Afghanistan remains the land of terrible policy options, where the choices only range from bad to worse.