Afghanistan may be headed for a post-election political impasse 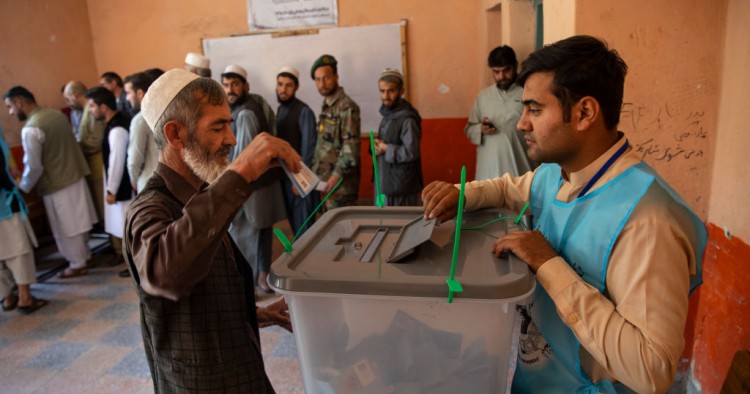 Preliminary results from the Sept. 28 Afghan presidential election will not be announced for at least another week. Yet events are shaping up that could drive Afghanistan into a political impasse similar to what the country faced in its last presidential election. Whether or not a second ballot is required — if none of the 15 candidates received more than a majority — Afghanistan may again be entering a period of constitutional crisis. In 2014, U.S. Secretary of State John Kerry stepped in to spare the country possible violence, but this time a skilled mediator and political formula to save Afghanistan from itself may not be available.

Following the election, the two leading candidates, Ashraf Ghani and Abdullah Abdullah, quickly declared they had captured the necessary votes to avoid a runoff. Their unsubstantiated claims could be written off as customary post-election expressions of confidence. More ominously, they could also serve to lay the groundwork for alleging a stolen election and claiming the declared winner illegitimate.

Following the election many observers asserted that it appeared less corrupt than in 2014. While ­­­­more than 1,200 complaints of balloting irregularities were filed, it was noted that this was fewer than in the past. A more serious questioning of the election’s legitimacy arose from a historically low voter turnout. Reportedly, 2.6 million participated out of a total of just under 9.7 million registered voters and an eligible population of around 16 million Afghans. The credibility of the mandate and participation was cast in further doubt when suspicious numbers appeared as the results trickled in. Areas of the country, including some thought highly insecure, were reporting turnouts approaching 90 percent. The availability of biometric identification could provide the means to cull fraudulent voters, but this method, in use for the first time, may face challenges over its reliability.

Sustained post-election unrest could have a strong impact on efforts to reboot an Afghan peace process. It is bound to complicate efforts to form a negotiating team for an intra-Afghan dialogue and strengthen the Taliban’s resolve to deny an elected Kabul government a place at the table. The only sure winner from a disputed election is the Taliban.