Allegations of bribery, conspiracy, and lack of legitimacy “pause” the UN Libya dialogue 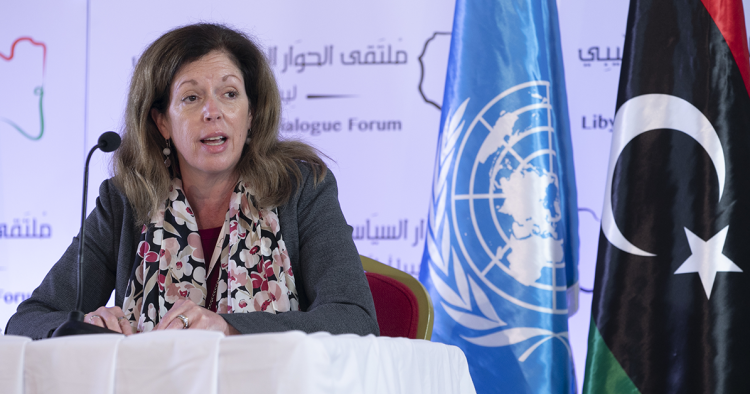 Despite the momentum and attention it has received in recent weeks, the United Nations-facilitated Libyan Political Dialogue Forum (LPDF) now appears on the brink of collapse. The LPDF came to an abrupt conclusion last night without its delegates appointing a new list of Presidential Council (PC) members or leadership for a unity government to lead a fourth transitional phase, as intended. Instead, delegates dispersed under a cloud of controversy, leaving Acting Special Envoy to Libya Stephanie Williams facing a host of challenges before the meetings will resume virtually in a week’s time.

The LPDF's hasty “conclusion” coincided with credible reports that some delegates had been offered significant bribes for preferential voting on the positions of the new head of the PC and the prime minister. Among those rumored to have offered bribes is Abdulhamid Dabaiba, a notable Misratan businessman and brother of Ali Dabaiba, one of the LPDF delegates. Though Dabaiba denies these claims, he is seen as one of the most corrupt beneficiaries of the status quo both during and since the Gadhafi period, and thus is likely to have an interest in influencing the appointment of Libya’s new leadership. Williams said an investigation would be opened into these claims.

Additionally, Williams indicated that delegates would be voting on a proposed selection criterion for filling the transitional appointments that would bar any individual who had held official position since 2014. Williams said delegates had agreed that a 75 percent majority vote was needed to pass the proposal. Such a rule would be a chilling resurrection of the Political Isolation Law passed in 2013, which barred Gadhafi-era officials from holding political office — only this time applied to the post-Gadhafi civil wars period. However, according to reports, only 61 percent of delegates voted in favor of the proposal, indicating that individuals who have been in office since 2014 may hold a role in the upcoming fourth transitional phase.

The LPDF was aimed at short-cutting Libya’s political and military stalemate by establishing a fourth transitional phase — complete with a roadmap to future Libyan elections and the naming of the new executive authority and a transitional government for that phase. However, it has come under significant criticism for the allegedly "opaque" manner in which delegates were selected and the legal and popular legitimacy of not only its attendees, but any outcome reached by them. Moreover, the absence of perceived legitimacy as a process not derived from either the international community, the U.N., Libyan law, or popular Libyan sentiment — now combined with claims of bribery — will make it extremely difficult for the U.N. to generate buy-in on the ground should the online sessions reach any conclusions.

The U.N.’s approach to achieving a political solution to Libya’s conflict is now highly vulnerable to falling apart. Russia, Turkey, Egypt, and France are all positioning themselves to supplant the U.N. as the leader of the Libya file during this critical stage, and are likely to introduce in the coming days alternative dialogues and roadmaps they have long been preparing. As this is happening, key regional and international actors may attempt to favorably position their Libyan clients as a means of securing their own influence in North Africa's future political environment and protecting their strategic and commercial interests in Libya.