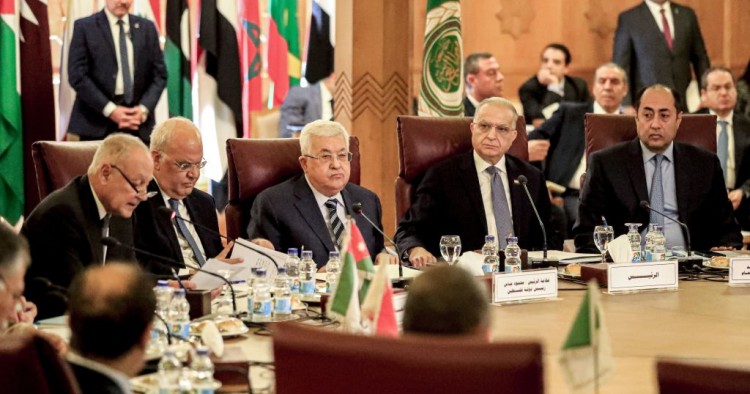 President Donald Trump’s recently released Middle East plan suffered a major blow in the Arab League on Saturday. Convening in an emergency session at the behest of Palestinian President Mahmoud Abbas in Cairo, foreign ministers representing the League’s 22 member states adopted a unanimous communiqué rejecting the so-called “deal of the century” in its entirety. In addition to reaffirming “the centrality of the Palestinian cause to the entire Arab nation and the Arab identity of occupied East Jerusalem, the capital of the State of Palestine,” the statement rebuffed the Trump plan, which it said “does not meet the minimum of the rights and aspirations of the Palestinian people, and violates the terms of reference of the peace process based on international law and relevant United Nations resolutions.” The communiqué concluded with a stern warning to “Israel, the occupying Power, against implementing the terms of the deal by force while ignoring UN resolutions, and holds the United States and Israel fully responsible for the consequences of this policy.”

The communiqué, while largely symbolic, was nonetheless a major victory for Abbas’ beleaguered leadership. Since its rollout of the plan last Tuesday, the Trump administration has claimed that key Arab states were solidly behind it. The fact that representatives of three Arab states — Bahrain, Oman, and the UAE — had attended Tuesday’s unveiling ceremony at the White House while several Arab states had “welcomed” or expressed “appreciation” for the plan, seemed to lend credence to the claim that it had Arab backing. Several supposedly supportive Arab states have since said they were misled by administration officials into believing the plan would call for a genuine Palestinian state with its capital in East Jerusalem. The administration had hoped that the Arabs states would ultimately pressure the Palestinians to go along with the plan, which calls for an expanded Palestinian entity under permanent Israeli control while green-lighting Israeli annexation in the West Bank. The Arab League statement ostensibly removes the ambiguity surrounding the stance of Arab states, though it is unlikely to have much impact on the ground.

Abbas also used the Cairo meeting as opportunity to notify Arab states of his decision to officially sever all ties with Israel, including security cooperation. While the Palestinian leader has made similar threats in the past, with the prospect of some form of Israeli annexation looking increasingly likely, the stakes could be considerably higher this time around.