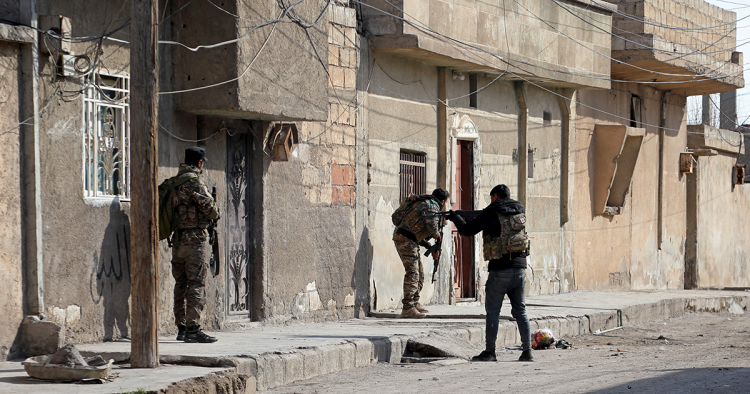 Intense fighting between the Syrian Democratic Forces (SDF) and ISIS continued for the fifth day in Syria’s northeastern city of al-Hasakeh on Monday, following ISIS’s biggest attack in Syria and Iraq in three years. In the evening of Jan. 20, as many as 200 ISIS militants, many wearing suicide belts, launched a coordinated multi-axis assault on al-Sina Prison, shortly after detonating two car bombs parked along the exterior walls of its northern wing. In the chaos that ensued, SDF vehicles were seized and used to break through secure walls, clearing the way for hundreds of ISIS detainees to escape. Having broken into the facility, some ISIS attackers then seized control of the prison’s northern wing — home to hundreds of battle-hardened militants and as many as 800 male minors, previously deemed to have been security risks by SDF authorities.

Five days later, some of that northern wing is still under ISIS control, while a force of 10,000 SDF fighters backed by U.S. air support and, per reporting, both American and British special forces, remain engaged in clashes with ISIS militants in two parallel neighborhoods surrounding the prison. So far, 175 ISIS militants have reportedly been killed and more than 450 recaptured, while 27 SDF fighters are dead and at least 25 remain hostages inside the prison. According to the United Nations, 45,000 civilians have also been displaced by the five days of fighting and elsewhere in SDF territories, ISIS has conducted more than a dozen other attacks.

Public statements issued by the U.S.-led coalition declaring that ISIS’s attack on al-Sina Prison has made the group “weaker” display a worrying misunderstanding of reality. As with its previous iteration in Iraq, ISIS places prison breaks at the top of its agenda — not just to release prisoners, but as bold, demonstrative acts that underline the continued unity of its cause and its persistent military capabilities. Imagery and news emanating from al-Hasakeh in recent days has been propaganda gold-dust for ISIS’s local and global cause. While the group remains a very long way from where it stood in 2013-14, it is not hard to envision this attack marking a turning point in ISIS’s efforts to recover and resurge.

The attack also raises serious questions about the sustainability of the U.S.-led coalition’s willingness to hold 12,000 ISIS militants in makeshift and poorly resourced prison facilities. Al-Sina Prison is the largest detention facility for captured ISIS fighters in the world, and yet it is merely a series of converted school buildings surrounded by walls. While human rights groups have expressed legitimate outcry about the fate of 800 boys inside the prison, few if any have asked why the SDF had judged them to be security risks and decided to hold them alongside battle-hardened ISIS militants for years on end.

There are also questions to be asked about the SDF’s security capabilities. That 200 armed ISIS fighters managed to bypass at least a dozen SDF checkpoints into and through al-Hasakeh city, along with two car bombs, in order to attack the most sensitive site in SDF territory represents a stunning intelligence and security failure. Once the dust settles, a coalition investigation should look squarely into whether ISIS had infiltrated prison security — as it has done in virtually every prison break in its history. Judging by ISIS video footage from inside the prison, prisoners appear likely to have known about the attack in advance and it is well-known that through bribery, ISIS prisoners in al-Sina regularly gain access to SDF guards’ cell phones.

As fighting has raged, the SDF has made a concerted effort to distract from its own failings by accusing Turkey of complicity in ISIS’s attack — through a series of claims that can best be described as misinformation. The SDF missed entirely a force of 200 armed jihadists and two car bombs entering a heavily guarded city under its control, so its claims to know precisely where they came from should be treated with a mightily big grain of salt.

Looking forward, the U.S.-led coalition has some serious soul-searching ahead of it. It has been clear for years that the current approach to ISIS detention (without trial, in makeshift facilities guarded by a poorly resourced non-state actor) was a ticking time bomb. While some marginal progress has been made with regards to the roughly 65,000 associated family members held in internment camps in SDF areas, the issue of male fighters has not moved an inch since the initial international intervention in 2014. Assuming an unprecedented local tribunal is legally and logistically impossible and the prospect of handing detainees over to the Assad regime is beyond the pale, the international community has a responsibility to better secure the prisoners while alternative options are considered.

Ultimately however, the attack on al-Sina underlines a concerning trend that has been clear for some time: ISIS has slowly, quietly, and methodically been rebuilding itself in Syria and Iraq ever since the defeat of its territorial Caliphate in March 2019. Rolling back ISIS’s territorial entity was a strategically simple task when compared to the follow-though: a complex, resource-heavy, and intelligence-dependent counterinsurgency and counterterrorism campaign. Yet instead of adapting to that complex challenge, the coalition cut its own resources, placing even more pressure on our “tactical” partner, the SDF.

Prior to this significant attack, ISIS had a great many opportunities to exploit in favor of its gradual recovery in Syria, but events over the past several days risk accelerating that process markedly. The fight against ISIS remains a long way from over.

Charles Lister is a senior fellow and the director of the Syria and Countering Terrorism & Extremism programs at MEI. The views expressed in this piece are his own.