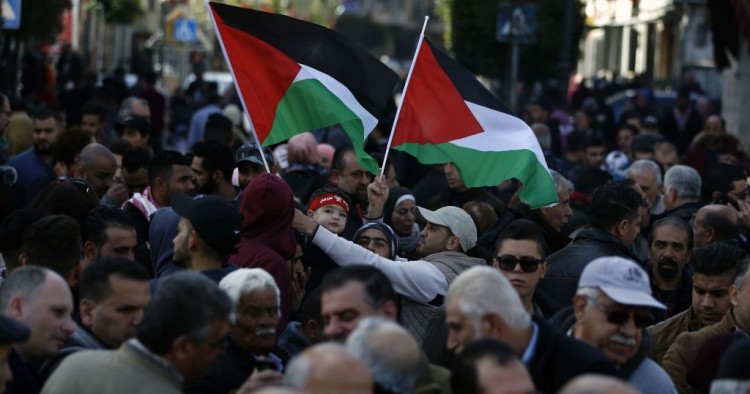 On Nov. 17 and 19, MEI’s Program on Palestine and Palestinian-Israeli Affairs convened a two-part series looking at the future of Palestinian politics and the Palestinian national movement. Below is a summary of Part 2, “Toward a Palestinian National Strategy,” which examined the efficacy of the Palestinian leadership’s current focus on a negotiated two-state settlement, as well as alternative visions and means of liberation, such as a one-state solution and the Boycott, Divestment, and Sanctions (BDS) movement.

Watch Part 2 of the webinar series the Future of Palestinian Politics Under a Biden Administration, Toward a Palestinian National Strategy, here.

Many have been surprised to see the Palestinian Authority (PA) taking steps, such as resuming security ties with Israel, reinstating ambassadors to Bahrain and the United Arab Emirates, and even looking to reform its prisoner/martyr payments program. These steps stand in contrast to the PA’s harsh rhetoric directed at the Trump administration, whose policies were characterized by unparalleled hostility toward the Palestinians.

However, Dana ElKurd is not surprised. She believes that this was to be expected and “a very good indication of just how far the Palestinian Authority is from the objective of representing the Palestinian people and working on their behalf. All of these moves signal their desire to return to the Oslo framework, to return to the status quo that was slightly upended by the Trump administration, in spite of how dramatically it has failed to produce Palestinian self-determination or preserve Palestinian dignity.”

Alternative visions: Beyond the two-state solution

Many argue that the material conditions on the ground in the occupied Palestinian territories have rendered a two-state solution no longer viable. Settlements and the settler project have been expanding at a rapid rate and are successful in entrenching the occupation of the West Bank. Palestinian thinkers around the world have argued that it is time to abandon the Oslo framework and work toward a single state that is democratic and secular in nature. Although  there is currently no Palestinian or Israeli political actor that is mobilizing politically with this objective, Yousef Munayyer does not see this as a hindrance to the realization of a one-state vision. According to Munayyer, “The vision of equal rights within a single state is a vision that is easier to build political coalitions and alliances around, both within the region among people and internationally among civil society.”

Munayyer argues that most people are not inspired by the idea of territorial partition, but rather “what people do care about and are motivated by are questions of freedom, equality, dignity and civil rights. … This is something that resonates, and we can build with that and see progress with that.”

This alternative one-state solution would encompass key Palestinian issues such as recognition of the Nakba and would include millions of Palestinian refugees who have been largely ignored in the peace process.

“Palestinians would be a lot better off if we were being abandoned,” observes Barghouti, “but we’re actually being proactively pushed into a corner by Arab regimes. … Saying ‘abandoned’ alleviates the regimes from accountability.”

Barghouti also argues that we cannot expect Arab regimes that deny their own people freedom to be dependable allies for the Palestinians: “If a state cannot be just with its own people, there was no expectation that they would be just with us.”

Even so, Barghouti cautions against conflating between Arab citizenry and the regimes that claim to represent them, in the same way that Palestinians do not feel represented by the PA or Hamas.

ElKurd elaborates on Barghouti’s points about Arab solidarity and argues that “the systems that deny Palestinians self-determination are the same systems that prop up authoritarian regimes across the region.”

ElKurd shared some of her own research with the panel about nonviolence resistance. She argues that non-violent strategies require a level of social buy-in in order to be an effective tool: a shared sense of objections, strong social ties, resources, and tools for organizing. ElKurd believes that Palestinians had this in the past, for example during the first Intifada, when there was a high level of social cohesion among Palestinian society. However, today this is not the case, mainly due to the physical divisions of the Palestinian territories (West Bank, East Jerusalem, Gaza) and the negative impact of the PA on Palestinian civil society.

According to polling ElKurd conducted for her research, “Palestinian society is quite divided. Around 43 percent of the West Bank and 46 percent of Gazan respondents support armed resistance, and around 50 percent in both cases support some form of nonviolent strategy. The popularity of armed resistance is increasing.”

According to ElKurd’s research, those who perceive society to be more cohesive are more likely to support nonviolent strategies. This correlation explains why armed resistance is becoming more popular as a strategic option as perceptions of cohesion among Palestinians decrease. She argues that these conditions of fragmentation make people more susceptible and empathetic to violence, as a legitimate tool for resistance and a strategy for national liberation.

The question for many is what vehicle will lead Palestinians to national liberation? Will it be the PA, or a revamped Palestinian Liberation Organization (PLO)? Is it possible to reform them at all? Munayyer believes that the PA is wholly illegitimate and mired in too much failure to deliver for the Palestinian people. In his view, simply reinvigorating the old structure of the PLO will not be enough. Rather, whatever comes to fruition in the future will need to look like “something between the PLO and something new” that involves all Palestinian stakeholders in a way we have not yet seen.

Until Palestinians create that new, fully representative structure, says Munayyer, the next step for the Palestinians in the short term should be to engage the Biden administration in ways that do the least damage: “I would hope the path they take is ‘do no harm’ or ‘do less harm.’” While the political foundation for a different approach by an American administration does not yet exist, there is much work being done to create it. In the meantime, while we work on what should be done, we should continue to engage a Biden administration on what should not be done.

Palestinians can catch their breath, Munayyer concludes, “but I hope it does not come at the expense of returning to the failed protocols of the past.”

Nooran Alhamdan is a graduate research fellow with the MEI Program on Palestine and Palestinian-Israeli Affairs.