As the coronavirus crisis in Egypt worsens, pressure is building 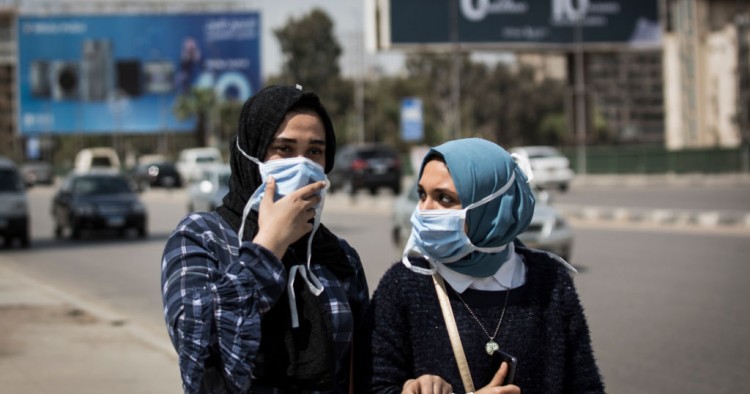 COVID-19 may be the ultimate unwelcome visitor. Its arrival was bad news but its stay is even worse and the longer that stay the more pressure it places on its hosts.

In Egypt, as with almost every country worldwide, that pressure is starting to show cracks. They come in several forms, among them the immense burden placed on those who have to continue to leave their homes to work or who have seen their employment wither away. The International Labour Organisation estimates that almost two-thirds of Egypt’s workers are in the informal economy — people who are without the benefits of contracts, social security, and regular pay. EGP 100 billion, or around $6.3 billion, has been allocated to staunch the economic damage; furloughed workers in the informal sector, for example, can apply for EGP 500 monthly for three months. To date 1.5 million have applied. The tourism industry, which had seen its highest revenues in years last year and accounts for almost 15 percent of GDP, is set to suffer to the tune of almost $1 billion per month, according to the minister of tourism, Khaled El-Enany. Remittances, which account for around $25 billion, are very likely to suffer due to a chain reaction — many of Egypt’s diaspora work in the Gulf, whose countries will likely be imposing their own cuts to cope with the pandemic’s economic blowback. The Suez Canal is also likely to see a drop in revenues. These are Egypt’s three top sources of foreign revenue.

At home, Egyptians, like other nationalities, have taken to stockpiling food, although supplies are so far holding up. The case is significantly more serious for medicine. Pharmacists report that panicky buyers are stockpiling both domestic and imported medicines “just in case,” effectively keeping them out of the hands of those who actually need them. Hydroxychloroquine, which has been touted, without adequate proof, as a COVID-19 treatment, is becoming extremely difficult to find. Considering the drug is actually used for treating autoimmune diseases, rheumatoid arthritis, and malaria, the shortage is causing acute distress. Other medicines are also being stockpiled, along with supplies of the 70 percent solution isopropyl alcohol, despite the fact that the Egyptian army has been working overtime to produce and distribute it. Larger pharmacies themselves have started stockpiling, exacerbating the problem. While some pharmacists have taken the initiative and are asking for medical prescriptions, even for over the counter drugs, seeing a doctor to get a prescription is increasingly difficult.

Again, attempting to plug the holes, the army has set up production lines in its factories for items like alcohol and facemasks, the latter of which it is distributing, for free. The issue, however, is not actual supply but buying behavior and that is something the government will need to address if it wants to prevent further fallout.