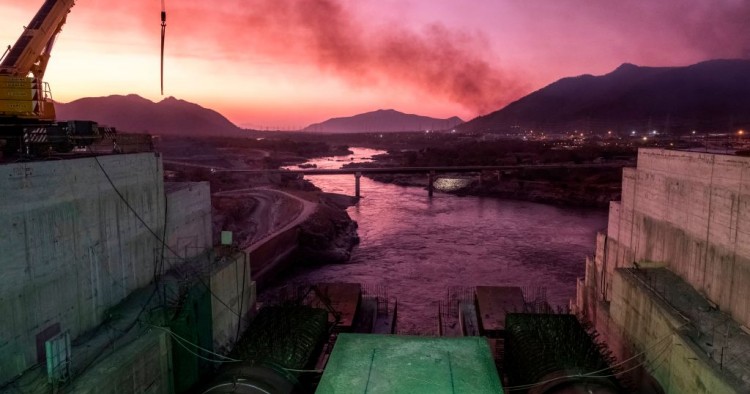 Rarely have so many counted on the U.S. treasurer for so much.

The latest round of talks between Egypt, Ethiopia, and Sudan on the filling and operation of the Grand Ethiopian Renaissance Dam (GERD) are being held in Washington, DC on Jan. 13 and 14, brokered by the United States, headed by Steve Mnuchin and the World Bank. The talks are latest in a depressingly long series that have dragged on since 2010 when Ethiopia first announced the construction of the dam. The GERD will be the region’s largest hydroelectric dam, with the capacity to hold the Nile’s entire annual rainfall. The major point of contention had been the rate at which the dam would be filled since during this period there would be a decrease in the amount of water reaching Egypt. A staggering 90 percent of Egypt’s water comes from the river — around 86 percent of it from the Blue Nile, which is the tributary that the GERD will affect. The largely fruitless tripartite negotiations had been getting progressively more contentious and last November, the U.S. and the World Bank stepped in to try to help get the talks back on track and a timetable was worked out.

Several rounds of talks in all three countries failed to live up to the promise of the DC meetings and the last one, in Addis Ababa, descended into aggressive finger-pointing. Ethiopia claimed that Egypt was “trying to impose sole ownership of the Nile” and insisting on filling the GERD over 12-21 years. Egypt, which is the last country on the Nile and cannot effectively control any other country’s water usage, noted that it has put forward proposals that would entail filling the GERD over 4 to 7 years, and not 12 to 21, and that the lack of progress on the talks was largely down to Ethiopia’s intransigence.

That raises the stakes for the DC meetings immeasurably. The issue of water is an existential one for Egypt, which is already water poor and struggling with a burgeoning population and challenges driven by climate change. A lack of resolution to the issue is likely to result in regional conflict. Both countries have large populations and porous borders with neighbors struggling with extremist and sectarian conflicts. Armed or proxy conflicts would be a regional nightmare and would have vast international ramifications. It is profoundly in the interest of the U.S. to help all three countries arrive at an amicable working solution. Apart from business and trade interests, the billions poured into aid in both countries, and the 10 percent of world shipping passing through the Suez Canal in Egypt, there’s the question of the U.S. ceding more soft power and regional influence to the Russians and the Chinese. A swift resolution is in everyone’s interest.