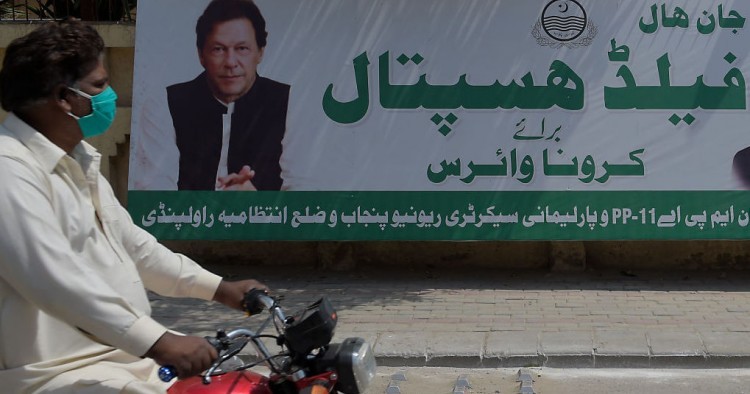 Pakistan has now emerged a global hot spot for the COVID-19 pandemic. As the number of cases climbs toward 150,000 and a third of the country’s Parliament is acknowledged to have contracted the disease, the policy response of the federal government in confronting this rapidly mounting public health crisis has been neither consistent nor decisive. Between federal and provincial authorities there is often also a visible disconnect.

Mainly at issue for the country is the difficult choice of whether to prioritize saving lives or saving the economy for a Pakistan that can ill afford to ignore either. Speaking last Friday, Prime Minster Imran Khan, who initially resisted a nationwide shutdown, defended his decision to roll back restrictions imposed in late March. Although calling on the people to follow prescribed health measures, and vowing to take “strict action,” Khan has insisted that Pakistan would stick to the course of relaxation. Among other measures, markets and public transport have been reopened and it was recently announced that expatriate Pakistanis returning from Afghanistan would no longer face quarantine.

As throughout the crisis, provincial officials are to an extent charting their own course for dealing with the virus. Last week officials in Punjab and Khyber Pakhtunkhwa provinces joined those in opposition-controlled Sindh — which has throughout the crisis adopted a somewhat more restrictive approach than federal authorities — in threatening to reimpose restrictions on shops and markets for breaching health protocols. When last week, the World Health Organization (WHO) questioned Pakistan’s health policies, it addressed its concerns directly to the provinces. The WHO claimed its advisory thresholds for lifting a lockdown were not being met. Pushing back, the Khan government asserted that the country’s decisions were based on a more “holistic picture” and were in the best interests of all Pakistanis.

On a larger canvass, Pakistan’s struggle against the disease is impeded by a culture of public distrust, societal inequities, partisan political opportunism, and corruption. But improved coordination within and between federal and provincial agencies can help in overcoming shortcomings in the implementation of health policies. And greater compliance can come with trustworthy, steady leadership and fuller public appreciation for the gravity of the crisis. If there is a saving grace in the current heath emergency, it is that an all too vulnerable Pakistan has not to date witnessed the country’s militant extremists being able to take advantage of the crisis.