Egypt and the African Union 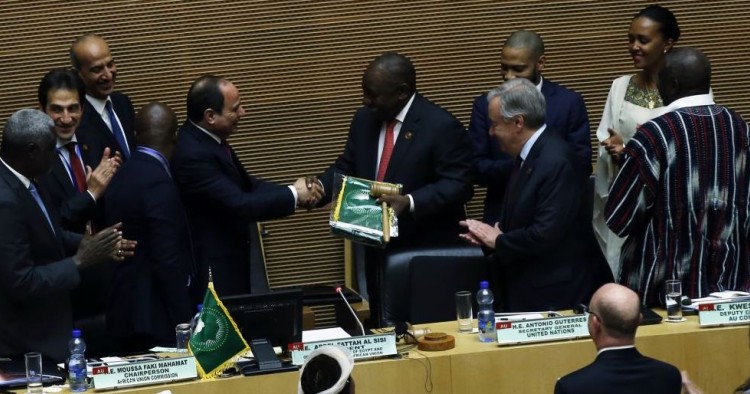 Egypt’s assumption of the presidency of the African Union (AU) last February was an important step for the country after the suspension of its membership in 2013. It was Egypt’s first time to hold this position since the AU transformed from its old structure as the Organization of African Unity (OAU) in July 2002. While this position is largely a ceremonial one that rotates between the continent’s five sub-regions, member states use the opportunity to advance the profile of their country, both regionally and globally.

Egypt certainly used its presidency to raise its profile as an African nation. The country took a leading position in speaking on behalf of Africa in important international events, including the UN General Assembly, the China-Africa Forum, the G-20 Summit in Japan, G-7 meetings in France, the Japan-Africa Summit, the Russia-Africa Summit, and just recently the UK-Africa Investment Summit. This comes at a time of increasing interest in Africa and its growing economies.

Egypt also hosted a number of Africa-related meetings, with focus on promoting intra-African trade and investment. The region is one of the world’s fastest growing economically and thus has drawn attention from other countries looking for new opportunities. China, for example, has been increasing its trade and investment in Africa, while the United States has also voiced interest in pursuing opportunities in the region.

The Egyptian government succeeded in using the activities related to the country’s presidency of the AU for domestic purposes as well. Its messaging focused on the return of Egypt to its African family after long years of neglect. The objective was to showcase that the “new Egypt” after 2013 is gaining prominence and standing on the world stage.

Egypt’s presidency, however, did not help to circumvent the obstacles facing the current negotiations with Ethiopia and Sudan over the construction of the Grand Ethiopian Renaissance Dam and its filling schedule. The alternative was to resort to United States and World Bank mediation, which remain underway.

As South Africa assumes the AU’s presidency in 2020 at the organization’s February meeting, Egypt will have to maintain its focus on Africa to prove that it was not a one-time effort, especially as it continues to develop economically and build the infrastructure to serve as a trade and investment hub for the continent. Africa holds a lot of promise, and Egypt should continue to be a leader for the region.

Yasser Elnaggar is a non-resident scholar at MEI and the CEO of EN Investment.