Egypt imposes stricter measures to tackle the spread of coronavirus 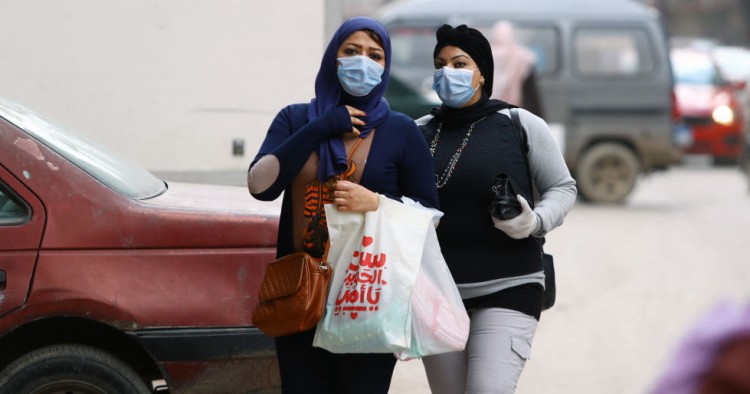 Funerals are never particularly pleasant affairs but in Egypt, they are important social events. They’re as prominent on the social calendar as any major celebration with attendance being even more mandatory than for more joyful events, like weddings. Last week, in an effort to tackle the spread of the COVID-19 virus, the government of Egypt banned public funeral gatherings. So Egyptians made them smaller, more intimate affairs, at their homes, with rooms full of mourners in masks.

The most populous country in the Arab world, with 100 million people straining its seams, Egypt has weaknesses that make it susceptible to a serious outbreak. Significantly more sophisticated and well-equipped health care systems in Western countries are expected the creak under the impact of a full-blown outbreak and Egypt’s already overburdened public health system is even less prepared for such a challenge. As of March 18, Egypt has announced 196 cases of COVID-19; considering the nature of the virus, the number could be significantly higher.

Funerals were only part of a clampdown on public gatherings; employees in Egypt’s vast public sector have been asked to work remotely where possible or, if not, on rotating schedules to limit interaction, the exception being those working in power generation, transportation services, hospitals, and ambulance and sanitation services. Any employees with existing chronic conditions that would make them more vulnerable to the virus, along with pregnant women or those caring for children under the age of 12, were given exceptional leave. Crucially, this type of leave is paid and may not be deducted from ordinary leave.

All flights in and out of Egypt will be suspended from March 19 through 31, although visiting foreign nationals will be allowed to finish up their trips and leave as originally planned. The flight suspensions will leave domestic aviation with a hefty bill of EGP 2.25 billion, according to Prime Minister Mustafa Madbouly. Cinema, theatre, and sports events have all been suspended for two weeks. As of March 15, all schools and universities and private tutoring centers were closed down for two weeks, with the Ministry of Interior vowing swift legal action against violators.

It’s all come on the heels of the worst storm in decades, which caused widespread flooding, complicated by a perennially unfit and run-down infrastructure, leading to the deaths of 21 people. Five days after the storm, some economically disadvantaged urban areas are still without water, robbing people of their major defense against the virus: hand-washing.

Social media helped supply further uncertainty; the government warned people against rumors, including one widely circulated WhatApp audio message claiming a curfew was imminent and urging people to stockpile goods, or others which claimed that the second academic semester had been cancelled or yet others which claimed that a plague of black locusts was on its way to Egypt. Egyptians have a tendency to assume that their governments aren’t always providing the most accurate picture and faced with uncertainty, they have deployed their secret weapon: their famous sense of humor. Social media is chock full of memes and jokes about the virus and its spread, including one which, to use an unfortunate term, has gone viral — a catchy public demonstration memo, declaring the Egyptians would stop social kissing on greeting to thwart the virus.

The sense of humor, while valuable, has its limits; consumers attempted to make up for the lack of actual locusts by descending on supermarkets and panic buying, prompting Prime Minister Madbouly to call on people to remain calm (and, more importantly, stop buying). The government has also moved quickly to stem the hemorrhage caused by the pandemic; it announced the allocation of EGP 100 billion toward combatting the virus, although it has not delineated how the money would be allocated. More concretely, the Central Bank announced the largest emergency rate cut since the devaluation four years ago, of three percentage points. It also instituted a new overnight deposit rate of 9.25 percent, an overnight lending rate of 10.25 percent, and a main refinancing operations rate of 9.75 percent. The Central Bank also instructed all banks to postpone any dues and payments on loans taken out by individuals and companies for the next six months, and to raise daily transaction limits on credit cards, canceling fees and commissions on POS and ATM withdrawals.

In an attempt to “encourage people to remain at home” and to help with remote learning during the school closures, the Ministry of Telecommunications upped internet bundle quotas by 20 percent. The National Telecom Regulatory Authority will pick up the EGP 200 million tab.

Egyptian online daily Mada Masr reported that the not-for-profit January 25 Hospital in Sharqiya has placed its facilities at the disposal of the Ministry of Health for use in quarantine or to receive, examine, and treat any suspected cases of coronavirus. The hospital announced it would bear all medical costs during this period, “provided that the ministry provides medical and administrative staff. The hospital also said it would purchase test kits for COVID-19 and make the tests available free of charge under the supervision of the Health Ministry.” In addition, the Ministry of Health announced that as of March 19, it would open 13 laboratories providing COVID-19 testing. For those referred from fever hospitals, testing would be free. Considering the mayhem that ensued when people attempted to get tested in response to a Saudi Arabian requirement for visas, these labs might provide potential for the transmission of the virus.