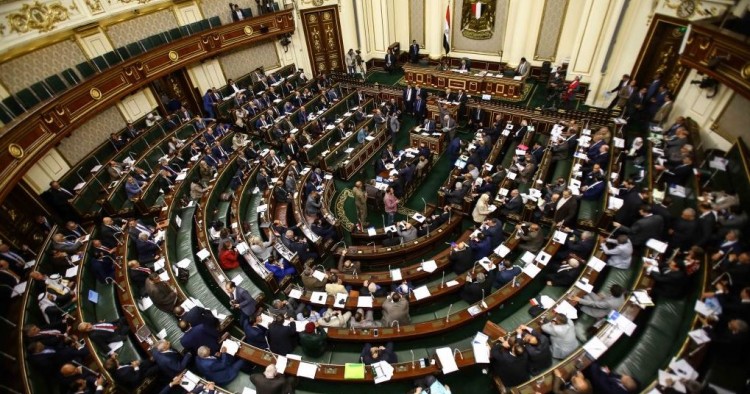 Egypt’s parliamentarians are going to be trying something new; they’re going to have to sit at least six feet apart, something that doesn’t come naturally to them. The government isn’t taking any chances — MPs’ access to the chamber is conditional on testing negative for COVID-19 and passing through glass self-sterilization chambers.

After having been suspended for 40 days, the country’s legislative body will head to the Assembly on Tuesday and Wednesday for a raft of legislation made necessary by COVID-19. This legislation includes new laws and amendments to existing ones, including the emergency law.

Most of the work deals with attempts to mitigate the economic fallout of the virus. Mirroring the global trend, Egypt’s poor and middle classes have been hit hard by the pandemic. Those who work in the informal sector, more than 11 million of them, have been especially hard hit, without access to job security.

The amendments have been designed to provide relief on both the individual and corporate levels. On the individual side, there are proposals to raise pensions by a hefty 80 percent, and to raise the wages of state employees, already poorly paid, by 12 percent. Impending tax bills are another potential nightmare on the horizon for many — the 2005 tax law will be amended to provide new exemptions for low and middle income tax brackets, while the 2008 real estate and property tax law will be amended to provide relief on outstanding property taxes.

MPs will also be voting on new amendments to the Constitution. Previously, amendments to Egypt’s Constitution had been engineered to prevent political contagion, so to speak. These amendments, passed by the Legislative and Constitutional Affairs Committee in an emergency meeting on Saturday, deal with the fallout from a literal contagion. Among the list of new powers, the amendments will give the president the ability to close schools and universities, various ministries and authorities entirely or partially, and, just as crucially, postpone the payment of water, electricity, and natural gas bills entirely or partially, as well as sign off on cash or in-kind contributions to both individuals and institutions to mitigate economic fallout. In an apparent reference to the kind of medical privateering the virus has brought to light, Bahaeddin Abu Shoka, the head of the Legislative and Constitutional Affairs Committee, said, "The new presidential powers comprise imposing control on research, scientific, and laboratorial works related in particular to biological material, and toughening measures regarding the possession, use, handling, and disposal of such material."

The new amendments will, however, also give the president the right to ban private and public assemblies. And that will remain active, well after the virus does.