Escalation and retaliation in Idlib as violence spirals 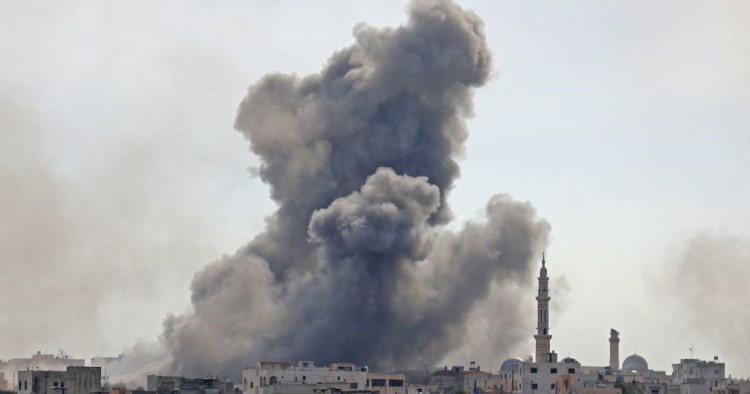 In the past 10 months, more than 800,000 civilians have been displaced and 1,600 killed in a brutal military offensive on northwestern Syria, carried out by the Assad regime and Russia. So far, only 20 percent of the region — encompassing northeastern Latakia, all of Idlib, northern Hama, and western Aleppo — has been recaptured and in the 80 percent that remains there are as many as 4 million civilians, squeezed into area with a greater population density than the Gaza Strip. According to the United Nations, a further 500,000 civilians are likely to be displaced if fighting continues into the coming months. Syrian humanitarian organizations are warning that the total could reach 1 million.

Notwithstanding the unprecedented humanitarian crisis, the situation in northwest Syria spiralled significantly over the weekend as Turkey escalated militarily in an attempt to deter regime advances along the strategically key M5 highway. More than 150 Turkish armored vehicles were deployed into Idlib; as many as four new military observation posts established along the M5, south and north of the strategic town of Saraqeb; new shipments of heavy weapons were transferred to opposition partners; and Turkey re-deployed hundreds of Syrian proxy forces onto new frontlines. Syrian regime forces retaliated by shelling Turkish troops inside Idlib on Sunday, killing 8 Turkish personnel — fueling a volley of more than 120 Turkish artillery shells on 46 Syrian military positions, where as many as 30 pro-Assad troops were killed. Turkey also ceased all joint patrols with Russia in northeast Syria and repeatedly “buzzed” the northwest with jets and helicopters.

Meanwhile, Iran has inserted itself militarily in a way not seen in 18 months, coordinating the regime’s offensive in western Aleppo alongside its network of Shi’a militias. A senior Quds Force officer, known locally as al-Haj Ali Ashgar, was killed there over the weekend, as were four members of Russian special forces. Rockets fired on civilian areas are being adorned with Qassem Soleimani’s name.

So far, Turkey’s escalatory steps do not appear to have deterred the Assad regime’s offensive, which has continued on Monday toward the Turkish post attacked on Sunday and to within 2 km of Saraqeb. If Turkish efforts to stop the regime’s advance on Saraqeb fail, the humanitarian crisis will escalate uncontrollably, eclipsing everything that came before it by an enormous margin.