Is escalation in Idlib on the horizon? 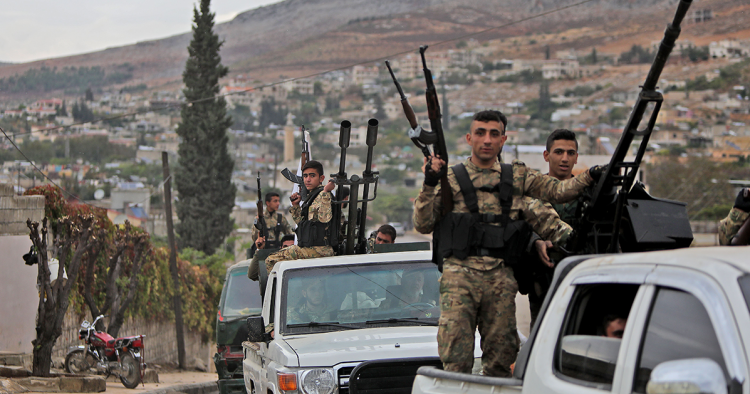 As the conflict in Nagorno-Karabakh rages between Armenia and Azerbaijan, Russia and Turkey once again find themselves on opposite sides in a regional geopolitical war. With the reverberations from the fighting now spreading across the region, the fate of Idlib could be tied to battles elsewhere as Moscow potentially seeks to open up another front against Ankara.

After a period of relative calm — in which the front lines have not changed in the last six months — tensions in Idlib were once again ignited as Russian warplanes launched fierce air strikes on a training camp for fighters from the Turkish-backed Faylaq al-Sham brigade. The attack, one of the deadliest single strikes in Syria’s nine-year-long conflict, killed 80 soldiers and wounded dozens more near Kafar Takharim, an area in northwestern Idlib, on Oct. 26.

In response to the Russian strikes pro-Turkish forces began a concerted bombardment of Syrian army positions, killing 15 Syrian soldiers on several axis points between Hama, Latakia, and Aleppo. With Turkey now engaged in multiple campaigns in Libya, Nagorno-Karabakh, and Syria, the Idlib front could be a key theater of operations that would allow the Russians to once again apply pressure on Turkey.

With Turkey now engaged in three semi-synchronized conflicts, Russia is searching for an opportunity to check its regional rival. Turkey has already utilized Syrian mercenaries — mainly from Idlib — in its support for Azerbaijan, with the Syrian Observatory for Human Rights estimating that Turkey has transferred at least 2,350 Syrian mercenaries to Azerbaijan to participate in the fighting.

So for Moscow, the deadly attack on Faylaq al-Sham was fair game and a clear message that it would seek to escalate in Idlib, if Turkey continued its role in Nagorno-Karabakh.

In response to the attack, Turkish President Recep Tayyip Erdogan suggested Russia was seeking to destabilize Idlib, saying it was “an indication of its lack of support for lasting peace and stability in the region.” Erdogan also warned that his government was willing to start a fresh military operation in northern Syria if Kurdish military groups were “not cleared from areas” along its border with Syria. The fact that Turkey views Kurdish factions in the northeast and Syrian government forces as enemies further complicates the situation.

In October a Turkish military base in Morek northern Hama was dismantled and abandoned, after the post was entirely surrounded and had to rely on Russian assistance and coordination to resupply and maintain it. During the last serious engagement in Idlib it was targeted several times by Syrian forces and was difficult to defend due to its remote location. With the latest posturing, it seems that a new offensive could be on the horizon for pro-regime forces backed by Russia with the aim of pushing further toward the strategic M4 highway.

Anton Mardasov, a non-resident scholar at the Middle East Institute, wrote that a Russian-backed operation in Idlib remains a possibility: “Despite the impressive number of (Turkish military) posts in Idlib, the location of which excludes the scenario of ‘bypassing’ them when the offensive is launched, and the size of the Turkish contingent, a new aggravation cannot be ruled out.“

Mardasov argues that, “One way or another, Russia perceives Idlib and northern Aleppo as alternative centers of power, so I think Moscow is already using ragged attack tactics to increase the possibility of another territorial or extraterritorial exchange. Theoretically, it isn't profitable for Russia to follow the course of Damascus, because any escalation shows the limits of the real capabilities of Assad's forces. However, it is difficult to understand which scenario Moscow will choose. Practice shows that, as a rule, it follows the easy path of supporting Damascus, without making combinations that expand the room for maneuver.”

Meanwhile, Turkey, which is becoming increasingly over-stretched on multiple fronts, would prefer Idlib to remain calm, even if that is unlikely to occur. Journalist and researcher Levent Tok told MEI that, “Turkey does not want a new conflict in Idlib, although it is inevitable. For this reason, Turkey does not see Russia's bombing of Faylaq al-Sham members as a reason for escalation. Ankara wants to maintain its pressure policy on the YPG, thanks to Russia.”

As Turkey has been withdrawing from positions to make its front line more easily defendable, the complexities in the Turkish-Russian agreement on Idlib leave considerable room for maneuver. Tok continued, “Turkey plans to preserve its presence in Idlib as long as it can. In all these respects, Ankara thinks that the war in Idlib will erupt because of Russia's insistence on the M4. The reason for the withdrawal of some Turkish observation points — among many other factors — is that expectation. To sum up, Turkey is expecting an Idlib war on the horizon. However, it has left its time to Russia.”

The Syrian military may also be looking to push for a military operation in Idlib and play into the emergence of the UAE-Greece-Egypt-France axis that could reward Damascus for taking the fight to Turkey again. According to writer Adnan Ahmad, in light of acts of terrorism in France the Syrian government may seek to launch attacks on Idlib to curry favor with Paris. “It is not excluded that the regime will take advantage of developments to revive security coordination with Paris, especially after what was revealed by Agence France-Presse that there was contact between one of the killers and with a Russian-speaking militant in Syria,” he wrote.

More violence could be coming to Idlib soon and as the respective sides gear up for another standoff, Russia’s strikes on Faylaq al-Sham may only be the warning shots. For the immediate future, it seems as though Idlib’s fate could be tied to events in Nagorno-Karabakh.