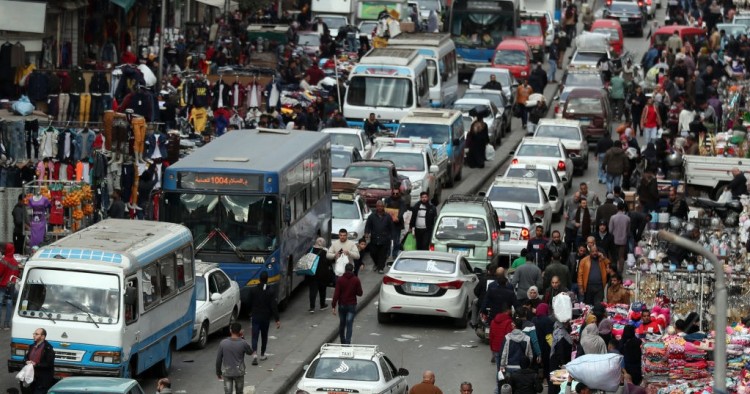 Last week, a little girl in Minya Governorate became Egypt’s 100 millionth citizen. While she might be a blessing to her parents, in the larger scheme of things, it isn’t a case of the more the merrier.

Egypt’s burgeoning population is one of the biggest threats to its future. It had dipped during the Mubarak period in the 2000s but shot up again after the Arab Spring and under former President Mohammed Morsi. The government is scrambling to curb the growth. It’s offering astronomically cheap contraceptives and it has initiated a public health campaign optimistically titled “Two is Enough,” but it’s far too early to see results. The current president, Abdel Fattah El-Sisi, has described it as a bigger threat than terrorism. The country’s resources are already strained and problem-solving solutions don’t seem able to keep up.

The problems are myriad and complex but the perhaps the two most alarming issues are employment and resource allocation.

Egypt’s labor market sees well over 700,000 new entrants a year. In a few years, it’s likely to reach a staggering 80 million in total. While the government has been trying to create job opportunities (unemployment is down to 8 percent, from 12 percent in January 2017, although up from a low of 7.5 percent in June of last year), it’s impossible to keep pace alone and the private sector has been slow to pick up the slack. A breakdown of the figures is equally worrying; only about 40 percent of working-age Egyptians are employed. That low figure is due in no small part to the very low female participation rate, which stands at under 25 percent. Work quality has also been affected, with over half of new entrants joining the informal economy and working without pensions, contracts, or health insurance. Unemployment to education rates remain consistently low, reflecting the quality of work available. It isn’t all bad news, though. Middle skills jobs, like factory, construction, and vocational trades, are up, providing a much needed and awaited resurgence in this field.

Of course, the labor market is inextricably linked to resources, which are both directly and indirectly affected by population growth. Agriculture, which is under serious threat from climate change and man-made challenges (like construction, mismanagement, pollution, and the Grand Ethiopian Renaissance Dam), is a major looming problem. It contributes almost 15 percent of the country’s GDP and accounts for almost a third of its jobs. To further complicate matters, agriculture is a major employer of women — almost 45 percent of women are employed in the agricultural sector.

It isn’t easy to curb population growth in a country where children are often seen, traditionally, as a blessing, or more practically, as a solid investment (they work and they provide insurance for parents who can’t afford any). However, other countries with similar, or worse, economic and demographic challenges have successfully addressed this issue. Egypt needs to tackle its population challenge head on, as part of a cohesive strategy. It’s a vastly complex equation but most urgently, it needs to improve climate change mitigation and water resource management and it needs to empower the private sector to lead economic growth and increase employment rather than relying on an outdated public sector-driven growth model. If Egypt fails to tackle these challenges comprehensively, the resulting scenarios don’t look good.