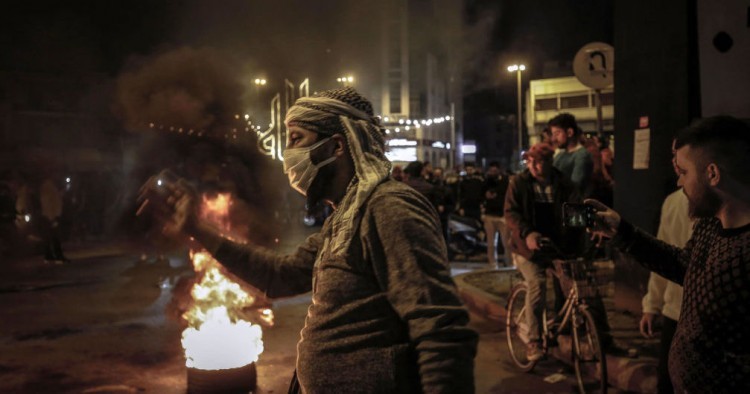 Protesters returned to the streets of Lebanon last week. Instead of non-violent protests, stores and banks were set on fire in parts of the country, including downtown Beirut. The violence reflects the increasing disaffection among large segments of Lebanese society over the rapidly deteriorating state of economic affairs. The protests took place after the Lebanese lira (LL) plunged in the black market to an unprecedented low of more than 6000 LL to the dollar, down from around 1507 LL just last year. Some analysts claimed the protests, which included Hezbollah constituents, meant the prime minister no longer enjoyed the party’s support and that the current government was about to fall.

Such a decision would be out of line with Hezbollah’s modus operandi since the start of the protests in October 2019, however. At that time it opposed the resignation of Prime Minister Saad Hariri even though its constituents were demanding it. Now Hezbollah is even less motivated to support the resignation of this cabinet because forming a new one under the current political conditions — while the government is in the midst of negotiations with the International Monetary Fund — will only lead to more civil unrest and economic deterioration.

For a party that is well-known for its command and control of “its” street, the fact that it allowed the violence by protesters in downtown Beirut to proceed unchecked reflects dynamics in both Hezbollah-controlled areas and inside its coalition with President Michel Aoun and Parliament Speaker Nabih Berri. On the former, economic conditions in Hezbollah-controlled areas are pretty dire, and the party seems to lack the resources needed to soften the blow of the deteriorating economy on its constituents. By letting people vent in the streets, Hezbollah seeks to shift the blame away from its inability to offer the help its constituency expects of it.

The main target of the protesters was Riad Salameh, the governor of Lebanon’s Central Bank. Firing Salameh, who played a major role in Lebanon’s descent into its current economic abyss, has long been a demand by Hezbollah leadership cadres and constituents, as well as a point of contention between the group and its long-standing ally Berri. Hezbollah’s other major ally, President Aoun, has also been wanting to sack Salameh for some time.

President Aoun and his acolytes in the Free Patriotic Movement (FPM), led principally by his son-in-law and presidential aspirant Gebran Bassil, have been trying to lay the blame for the current state of affairs on the “Hariri” economic model introduced by the late Rafiq Hariri and later championed by Saad Hariri when he was prime minister. In addition to the Hariris (father and son), the Aounists also blame Berri and Walid Jumblatt, whom they consider Saad Hariri’s allies. President Aoun’s ongoing attempts to distance himself and his son-in-law from the economic decision-making of the Hariri-led eras smack of hypocrisy since the FPM has participated in every cabinet since 2005 and Aoun has been president of the country and involved in every economic decision made since 2016. To President Aoun, firing Salameh, one of the main architects of Lebanon’s failed post-war economic model since 1993, will mark the official end of an economic era long identified with the late Rafiq Hariri — an era he and his supporters have built their political fortunes opposing.

Since 2006, when Aoun signed a memorandum of understanding with Hezbollah, the party’s leaders have been balancing between the competing positions and interests of their two main allies, Berri and Aoun. Last week’s protests are part and parcel of this balancing strategy. On the one hand, they called for the firing of Salameh in line with Aoun’s demands. Yet on the other hand, Hezbollah has not yet officially endorsed firing him.

Randa Slim is a Senior Fellow and the Director of MEI’s Conflict Resolution and Track II Dialogues Program. The opinions expressed in this piece are her own.