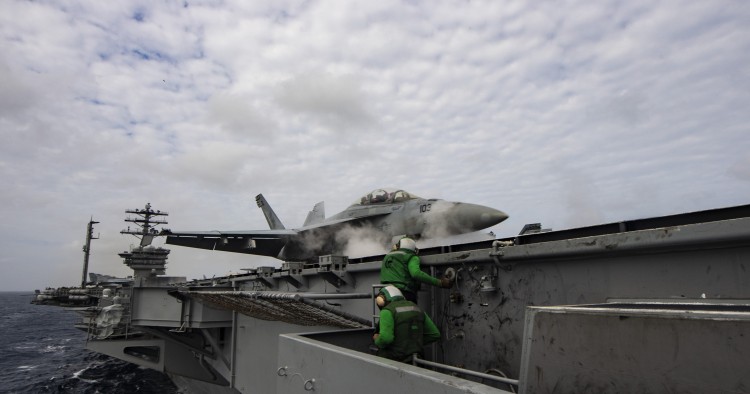 I don’t understand why Iran’s Revolutionary Guards insist on conducting military exercises in the Gulf waters that are as devoid of credibility as they are comical. Because if the goal of these drills is to intimidate or change the calculations of the U.S. Navy, nobody is flinching or losing any sleep in the Bahrain-headquartered U.S. Naval Forces Central Command, or NAVCENT.

If you watch the latest drill, which was once again designed to attack a fake U.S. aircraft carrier (last time they did that was in 2015), most of its parts would never happen, or be allowed to happen, in real life. For example, flying a 1970s-era helicopter that close to a U.S. aircraft carrier and hoping to fire a missile without getting detected and blown up way before it even gets to its launching position seems about as plausible as a Martian visit to Earth. It’s possible, but unlikely. And those infamous Iranian speedboats? Good luck evading the lethal Phalanx Close-In Weapon System (CIWS), which will autonomously detect and swiftly kill them.

A few words about the U.S.S. Nimitz, which is the vessel that routinely sails in Gulf waters and the one with which the Iranians would have to deal, are in order. The Nimitz has a three-dimensional air-search radar that can easily detect any aircraft the Iranians deploy, including their old, Shah-era fighter jets. It has a sophisticated surface-search radar, too. So that missile support coming from an area near the port city of Bandar Abbas, as shown on the Iranian video, the moment it turns on, it will be a target for the Nimitz’s anti-surface missiles or its dozens of tactical aircraft including F-18 Hornets, which are equipped with sophisticated sensors and precision-guided weapons.

And it’s not like the Nimitz is patrolling those waters by itself. Multiple U.S. destroyers protect it and will certainly engage should the Iranians launch offensive operations. Those surface combatants are equipped with the world’s most advanced air and missile defenses.

Sure, if things escalate the Iranians can use more precise and deadly ballistic missiles and possibly drones launched from inside Iran. But the Nimitz is not defenseless against those, or it can at least temporarily hold the line with its layered anti-missile capabilities until further U.S. support arrives. The Nimitz also has a bunch of countermeasures including electronic warfare systems, and a host of defenses against anti-ship missiles. In short, this mammoth of a ship, one of the largest in the world, is downright dominant at sea, and not as vulnerable as many U.S. military reporters portray it to be.

The Iranians do have, and will most probably rely on, an asymmetric playbook to try to offset their American adversary’s conventional dominance. And this asymmetric repertoire is of some concern because if employed effectively (and that’s a big if for an Iranian military that has historically underperformed), it can cause damage.

That said, U.S. deterrence should play a big role. Just because the Iranians can go asymmetric, it doesn’t mean that they will or that the U.S. Navy will employ similar, asymmetric means. The U.S. Navy is not about to lose its decisive conventional superiority just to “keep things fair” in battle or maintain tit-for-tat with the Iranians. If the Iranians actually perform any of the drills they have been running in real life, the U.S. Navy will unleash conventional firepower that will probably not stop until Iranian military power is severely degraded and maybe a large part of the Iranian navy is sunk.

So the Iranian regime can showcase all it wants to its domestic audience how it can destroy our assets at sea. But its leadership knows that any military confrontation they start with the U.S. Navy — conventional or otherwise — will lead to outcomes that they won’t want to broadcast on Iranian state television.