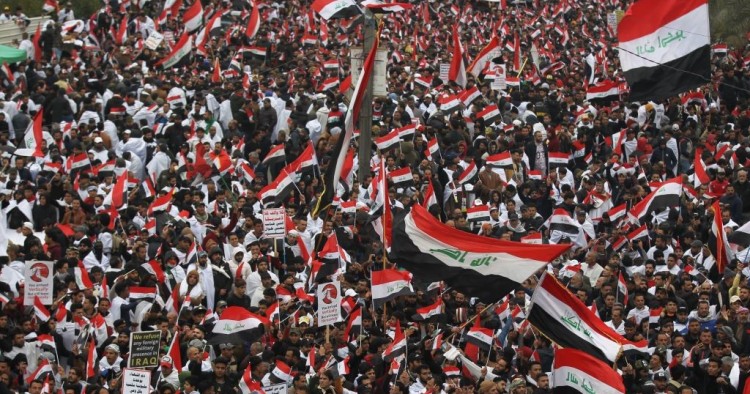 On Jan. 24, hundreds of thousands of Muqtada al-Sadr’s followers took to the streets in peaceful demonstrations in Baghdad, calling for the removal of U.S. forces from Iraq. Later the same day, al-Sadr asked his followers, who for the past several months have joined anti-government protests in Baghdad and cities in southern Iraq, to vacate the protest squares in reaction to what he saw as antagonistic behavior toward him and his followers. This opened the way for security forces to move against the civilian protesters, burning their tents, firing tear gas and bullets, and killing and wounding them.

Al-Sadr’s flip-flop must be understood in the context of three ongoing power struggles in Iraq. First, amid the tumult caused in the ranks of the Popular Mobilization Forces (PMF) by the demise of their commander Abu Mahdi al-Muhandis, al-Sadr sees an opportunity to reclaim leadership of the PMF-affiliated Iraqi street. The Jan. 24 march was a show of his ability to mobilize the masses aimed both at the Iranian leadership and his Iraqi Shi’a competitors, primarily Hadi al-Ameri, the new deputy leader of the PMF.

Second, unlike the 2015-16 anti-government protests, the leadership of which al-Sadr took over, enabling him to secure the largest number of seats in the 2018 parliamentary elections, this wave of protests that began in October 2019 has proven to be immune to control by any of the political parties, including al-Sadr’s. Al-Sadr’s decision to pull his supporters from the anti-government squares is a serious test of the protest movement’s ability to sustain itself and remain resilient in the face of continuous assaults by security forces. So far, disproportionate violence by security forces against the civilian protesters has led to the exact opposite of what they sought to achieve. Instead of forcing people to leave the protest squares, violence caused protesters’ numbers to swell.

Third, there is an ongoing contest for power between al-Sadr and al-Ameri over the formation of the next government. In 2018 Adel Abdul-Mahdi was appointed prime minister based on an understanding between al-Sadr and al-Ameri, and Abdul-Mahdi’s inner circle was primarily composed of representatives of these two men. Al-Sadr is now seeking to enhance his negotiation leverage by placing himself at the intersection of the two main political camps in Iraq today: the pro-Iran, anti-U.S. camp and the anti-government protest camp. His flip-flop on Jan. 24 cost him support both among some of his followers and with the anti-government civilian protesters. It might be a self-inflicted wound resulting from his mercurial temperament or it could be based on a cost-benefit calculus that al-Sadr sees as playing to his benefit in the short term.