As its air campaign in Idlib continues, Turkey looks unlikely to stand down 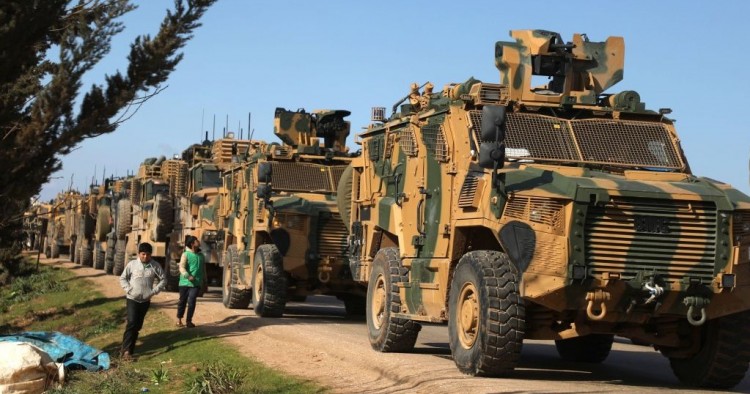 For three days straight, the Turkish military has sustained an unprecedented air campaign targeting regime loyalist forces in northwest Syria. In 72 hours, several hundred Syrian military personnel and Iran-backed militiamen are thought to have been killed and dozens of tanks, armored vehicles, artillery pieces and howitzers, and heavy trucks destroyed. The high-intensity campaign has been run almost entirely by armed drones, with sporadic reports of Turkish F-16s having launched stand-off strikes from within Turkish airspace. F-16s are also thought to have been responsible for downing two Syrian Air Force Sukhoi-24 fighter jets on Sunday, but it was drones that destroyed at least two Russian-made air defense systems (a Pantsir-S1 and a Buk-M2) over the weekend. Strategic targets have also been hit, including facilities in at least five Syrian airbases and an alleged chemical weapons factory in the infamous al-Safira Defense Factories complex in Aleppo.

While it’s still early days, Turkey does not appear likely to stand down. President Recep Tayyip Erdogan has too much at stake, particularly following the deaths of at least 33 Turkish soldiers in Idlib on Thursday night, in a calculated Russian air assault. By Sunday, Turkey-backed opposition forces appeared to have regained some momentum in the Jabal al-Zawiya region of Idlib, where they stood poised to potentially recapture the symbolic town of Kafranbel. However, pro-regime forces have re-launched offensive operations on Saraqeb, in an attempt to re-assert control over the strategic M5 highway. On Monday, both pro- and anti-regime actors had returned to full-scale ground conflict, but for the first time, both sides had air support.

There’s little doubt that the Syrian regime and Russia, making use of additional Iran-backed militia manpower, can sustain a serious military challenge to the opposition and Turkey. However, the scale of Turkey’s intervention will have shaken Moscow and the losses incurred by pro-regime forces are serious and will further strain a Syrian Army that was already overstretched. Russian President Vladimir Putin is set to meet one-on-one with Erdogan later in the week, when the likelihood of a cease-fire, or even a more permanent arrangement is far higher than it seemed a week ago.

Beyond Idlib, the re-emergence of open armed revolt in southern Syria’s Daraa governorate on Sunday was a major development likely to insert itself into the Idlib equation. Regime positions were captured by tribally-mobilized opposition fighters in multiple towns (al-Sanamayn, Dael, Tafas, Karak, Sahm al-Jolan, and Nawa), with the regime deploying tanks and artillery into pitched battles in al-Sanamayn. Though over 300 attacks had been recorded in Daraa in the last year, Sunday’s events were a major escalation, which if sustained, would force the regime to reconsider placing all of its cards in Idlib alone.