It's not about the Patriots 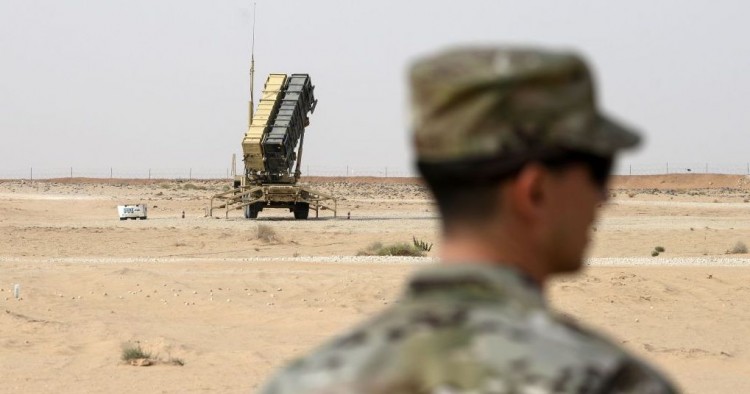 The best way to describe the Trump administration’s decision to remove Patriot missile defense systems from Saudi Arabia is by highlighting its military irrelevance and political significance. Indeed, in no way does this move lessen our ability to respond to Iranian aggression if we choose to. We can do that still even with a much smaller percentage of the force we currently have in the region. Our posture in the region, and in Saudi Arabia, has always sought to deter threats, not defend against them. There is just too much geographic and aerial space to defend, and now with precision and sophisticated technology in the hands of our adversaries, including Iran, we are even less capable of pursuing comprehensive defense.

The problem is that we are not even able to deter as much as we would like to these days, as the attack on Saudi Aramco’s facilities at Abqaiq and Khurais late last year made clear. And this U.S. withdrawal of assets neither boosts nor hinders deterrence. What does undermine our deterrence is our entire policy toward and security commitment to Saudi Arabia, which is suspect at best. When the president allegedly threatens the Saudi leadership to remove all American troops and equipment if they don’t stop their oil price war with Russia, Iran rejoices. When the president repeatedly says that Saudi Arabia won’t survive longer than two weeks if America pulls out (regardless of whether he’s right or wrong), Iran listens.

It’s not really the hardware we have in the region that affects the calculus of the Iranians (although I am not suggesting we remove it all. Instead of obsessing over the size of our presence, I would focus a lot more on our military readiness and deployed capabilities). It’s our very relationship with the Saudis, and by any objective standard, there is a crisis in that relationship. Of course, we’re not solely to blame for this predicament. The Saudis brought this on themselves too, and the war in Yemen and the Khashoggi murder have played a huge part in this. That we rely a lot less on Saudi oil nowadays matters too. The Iranians, as they always have, will keep testing the U.S.-Saudi partnership. Until we know who will be sworn in as president of the United States in January, things will be tense in the region.