Libya: Will Berlin peace plan take on the immovable object and his irresistible force? 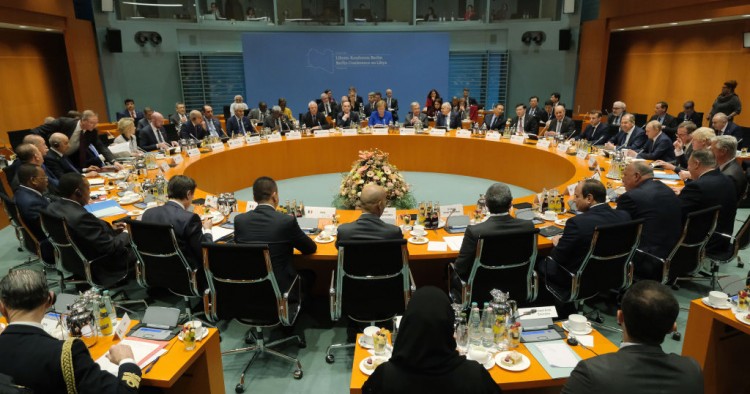 The foreign dignitaries hosted by German Chancellor Angela Merkel in Berlin and joined by UN Secretary-General António Guterres signed off on a 57-point communique that featured a call for cease-fire, a commitment to respect the existing UN arms embargo, a return to the Libyan political process, restoration of the state’s monopoly on the use of force, economic and financial reform, respect for international law and human rights, and a new follow-up process for a “5+5 Committee” of military representatives from the two sides of the civil war to agree on a cease-fire and monitoring. All this will be supplemented by ongoing monthly political meetings on Libya by the internationals attending the conference, and twice-a-month meetings of four technical groups designed to find areas the warring parties can agree on.

The communique reflected the goal of getting at least an international agreement on a process to stop Libya’s civil war, given Hifter’s continuing refusal to sign any agreement that commits him to a cease-fire in the absence of the Government of National Accord (GNA) first agreeing to and then carrying out stringent preconditions. These include dismantling the militias that maintain security and sending all foreign forces home — in essence, surrendering. While the peacemakers met, Hifter also doubled down on a display of raw power, ordering the blocking of Libyan ports and pipelines to stop the country’s oil exports. In so doing, he decimated the primary source of revenue for its government, cutting oil production from 1.2 million barrels per day to some 72,000 barrels per day, the lowest level since the end of the 2011 uprising.

Amid not yet conclusive reports of truce violations immediately following Berlin, the UN is pressing to get Libyan direct talks going on conditions for a cease-fire in Geneva this week. Assuming that the internationals who have made an escalating mockery of the UN arms embargo in Libya now truly and verifiably intend to keep their promises to stop providing arms and fighters for both sides, the peacemakers working with the Libyan reps will need to see whether the patrons are willing to use the tools they have to get their clients — and especially Hifter — to accept necessary security, political, economic, social, and cultural deals. At this point, it’s not clear Hifter has any interest in playing that game. To date, neither his foreign sponsors, nor his domestic enemies, seem to have swayed him from the belief that he is the both the immovable object and the irresistible force destined to make Libya great again, and that his time is nearly at hand.