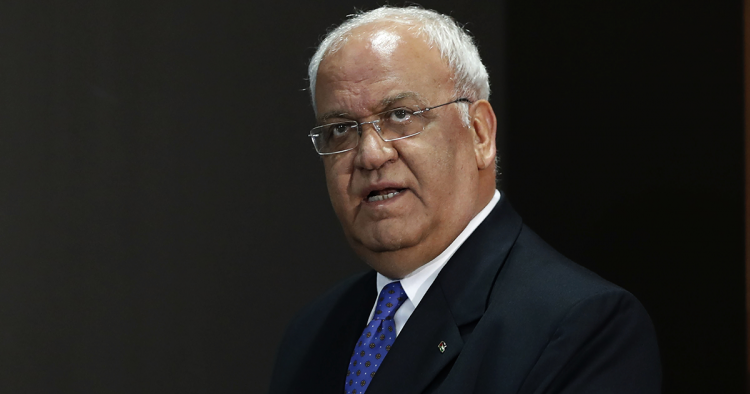 The passing of Palestinian chief negotiator Saeb Erakat is a tremendous loss, not only for his family but for the Palestinian people and all those who knew and worked with him as well. He was a tireless advocate for his people who dedicated his life to the goal of Palestinian freedom and the dream of Israeli-Palestinian peace.

I first met Saeb in January 2004. I had just moved to Ramallah to start a new job with the Negotiations Support Unit, a donor-funded project that provided technical support to the Palestinian leadership in preparation for negotiations with Israel. As the head of the Palestine Liberation Organization’s Negotiation Affairs Department, Saeb was our primary liaison with the leadership.

Of course, as a long-time observer of the Israeli-Palestinian conflict, I already knew of Saeb and his reputation. Saeb’s remarkable political career, which spanned more than three decades, mirrored the ups and downs of the Palestinians’ own struggle for freedom.

Saeb was part of the now famous cohort of Palestinian leaders propelled onto the world scene by the first Intifada and that included fellow luminaries Faisal Husseini, Hanan Ashrawi, Haidar Abdel-Shafi, and others. At the historic Madrid conference of 1991, engineered by then Secretary of State James Baker, Saeb made headlines and caused a diplomatic uproar with his decision to drape himself in a kuffiya — the traditional Palestinian scarf that had become a symbol of the uprising against Israeli occupation. Saeb was also one of the chief proponents of the Oslo peace process of the 1990s and a prominent member of the Palestinian negotiating team in the ill-fated Camp David summit of 2000.

During the nearly six years I spent working with and for Saeb, two characteristics stood out the most: his passion and his humility. Unlike others in the Palestinian leadership, many of whom regarded our group of mostly foreign advisers with suspicion or dismissed us as upstarts, Saeb regularly solicited our advice and invited — even welcomed — opposing viewpoints. Whether it was a new American peace initiative or how to respond to Hamas’s election, Saeb always wanted to know what we thought, why, and how to make things better. And although we frequently disagreed with his or the leadership’s decisions, he never made us feel uneasy or uncomfortable for doing so.

Saeb was a man of unrelenting energy and passion. An unrepentant workaholic with seemingly boundless energy, Saeb seemed to relish the hard days and long nights that came with the job. It was not uncommon for him to hold four or five meetings in Jerusalem, return to Ramallah to brief President Mahmoud Abbas before heading over the Allenby Bridge to catch a flight to Cairo or Riyadh.

As an activist, an academic, a politician, and a diplomat, Saeb Erakat left an indelible mark on Palestinian politics and diplomacy, one that will not be forgotten any time soon. He will be sorely missed.

Khaled Elgindy is a senior fellow at MEI and directs MEI’s Program on Palestine and Israeli-Palestinian Affairs. The views expressed in this piece are his own.