Only Lebanon can save Lebanon 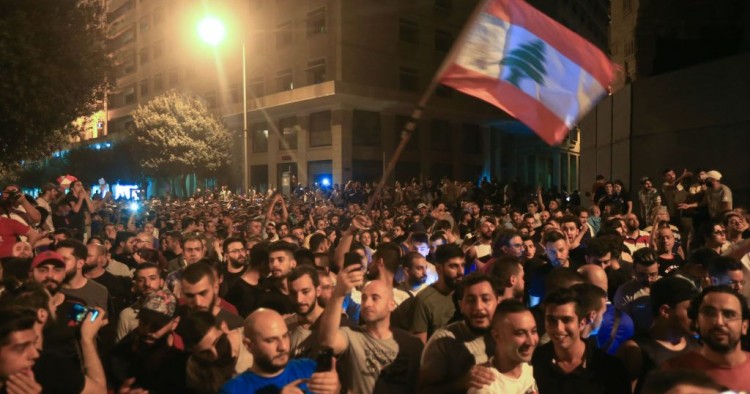 Something had to give.

Decades of corruption and criminal mismanagement by Lebanon’s ruling elites — the same clique who have governed the country since its independence in 1943 — have finally led to an economic implosion and a social explosion.

The Lebanese people have risen up several times throughout their modern history to demand change, most notably and spectacularly in 2005 following the killing of former Prime Minister Rafik Hariri, forcing Syria to withdraw its troops from Lebanon. The 2005 “Cedar Revolution,” as the world came to know it, was followed a decade later by the “Garbage Revolution,” when thousands of people took to the streets to protest the government’s persistent failure to collect mountains of trash, primarily in the streets of Beirut.

But when Arabs revolted during the “Arab Spring,” the Lebanese turned into spectators. Not because they didn’t suffer from the same socio-economic problems, but because they were afraid of overhauling their fragile political system at a time of great danger in the region when ISIS was running amok. They settled for reform rather than revolution.

Except that those reforms, promised over and over again by the politicians, never came. So on Thursday, for the first time in the history of Lebanon, people from all walks of life took to the streets demanding fundamental political change and accountability. On national television and unafraid, they derided their respective sectarian leaders including President Michel Aoun, Prime Minister Saad Hariri, and Hezbollah Secretary-General Hassan Nasrallah, and blamed them for their misfortunes. Never before has that happened.

That the demonstrations were triggered by a legally questionable and financially obtuse decision by the government to charge for WhatsApp calls is totally irrelevant. This is not about a messaging app. This is about less than half the people in Lebanon being connected to official water supplies, a tiny minority getting full electricity coverage, more than a third of the country’s youth being unemployed, and the majority lacking adequate health care and decent public education. In addition, the rule of law is nonexistent and the crimes of the wealthy and the politically connected go unpunished. The Lebanese pound is in free fall and capital is leaving the country faster than a supersonic train. Syrian refugees make up nearly a quarter of Lebanon’s population — the highest number per capita in the world — and that’s not even counting the Palestinian refugees scattered in camps across the country who make up around ten percent of the Lebanese population.

The Lebanese ruling elites’ idea for an economic recovery is to further tax the poor, borrow some more, and stay in power. Popular mobilization and anger, which seems to be growing by the minute, forced them to immediately halt all “corrective” measures, but they seem to have no interest in resigning. At least that’s what Gebran Bassil, Lebanon’s impetuous foreign minister who is less interested in foreign affairs and more in the presidency held by his father-in-law, said in his press conference: that the choice is between the current governing formula, which rests on a political consensus, or total chaos. Don’t buy it, it’s a false choice.

It’s unclear how much of a political force the demonstrators can generate to achieve their demands, which center on three things: the resignation of the government, the cancellation of taxes since 2017, and early national elections. As large and widespread as the protests are, there are those (and they are many) who will also take to the streets to protect their warlords and ultimately clash with the peaceful demonstrators. This has happened consistently throughout history: in the throes of uprising, there are always those who wish to overturn the status quo and those who wish to preserve it. In Lebanon, the balance of power is in favor of the latter because they have always had the guns and control of the state.

That said, this same group cannot survive without external support. Iran can send more weapons to its ally Hezbollah, but that won’t magically eliminate Lebanon’s astronomical public debt. Russia can promise investments, but those cannot match what the United States and France can offer in terms of diplomatic protection and financial support. And the wealthy Arab Gulf states have made it clear that they have no interest in rescuing Lebanon, which they perceive as an Iranian satellite state.

So, it really comes down to what the Americans and the French decide to do: either bail out Lebanon’s sectarian elites by providing an international economic package that would prevent a total collapse, or side with the protestors. The former has been tested repeatedly for decades and has brought nothing but political failure and economic disaster.

This is the time for a new beginning in Lebanon. To leaders in Washington and Paris, pull the plug on this corrupt and incompetent political class, support the formation of an emergency cabinet of technocrats with a clear timeline and mandate, send a clear message to the Lebanese Armed Forces not to clamp down on peaceful activism, and let the free-minded Lebanese at least have a shot at governance. How much worse can they do?

Photo by STRINGER/AFP via Getty Images