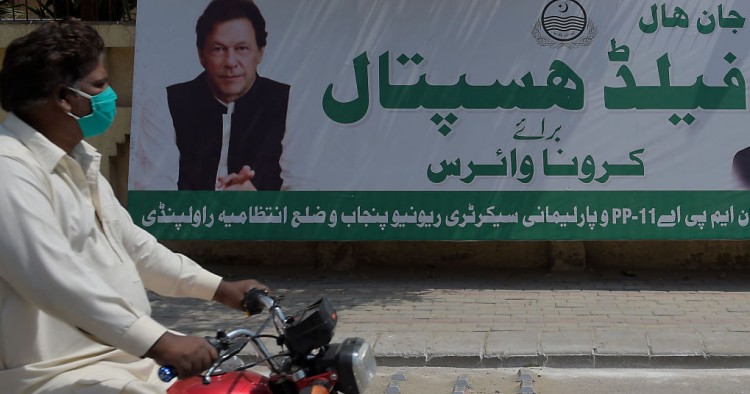 With the number of reported COVID-19 cases rising sharply, Pakistan is already feeling the strain on its health care system and from the restrictive measures put in place to slow the spread of the virus. Controversies emerging from the health emergency are noticeably falling along the familiar fault lines of federalism, religion, social class, and politics.

Overall, the provinces outpaced the Pakistan Tehreek-e-Insaf government in imposing lockdowns and other restrictions on the population. While some provincial governments, principally Sindh, moved early on to curtail activities, Prime Minister Imran Khan initially resisted declaring a nationwide lockdown. Despite complaints, the federal government has as yet failed to allocate funds specifically designed to help bolster the provinces’ fight against the disease. Several government ministers along with the Supreme Court have recently challenged Sindh’s decision to allow the early release of prisoners facing trial and inmates most vulnerable to the pandemic. Actions by the provinces to ban people from gathering at mosques put them at odds with a prime minister who seemed for a time more interested in deferring to the country’s religious groups.

The shortage of appropriate personal protective equipment for health providers has spurred protests. Two organizations for young physicians have laid blame on the federal health minister. They allege that at the beginning of the health crisis the Khan government had permitted millions of masks and other protective equipment to be exported and have called on the Supreme Court to order a criminal investigation. These doctors from government hospitals claim that federal authorities have appointed unqualified individuals to head their institutions. Overall, the conditions in state-run facilities can be contrasted with those in more privileged private and military hospitals.

Politically, Pakistan Peoples Party leader Bilawal Bhutto Zardari has raised his voice in criticizing the prime minister for not developing a national strategy to combat the coronavirus and for failing to consult with the opposition to forge a national consensus around the issue. By contrast, the military, normally highly visible during times of national disaster, appears willing to stand aside. Rather than being visibly engaged in constructing health care facilities or acting to help secure the country’s food supply chain, the military seems content with having the civilian authorities carry the responsibility for dealing with the crisis. The current health emergency could be a time to bring Pakistanis together. Thus far it has done more to display cleavages that chronically plague Pakistan.