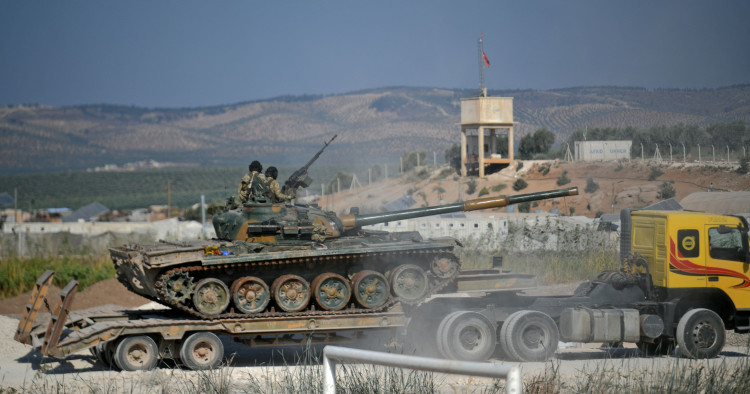 For roughly three years, the lines of control between rival and hostile theaters of conflict across Syria have remained frozen — held in place by a series of ceasefires and stalemates. While small-scale skirmishes and tit-for-tat shelling may have continued across northern areas of the country throughout this time, the broader, strategic “frozen conflict” status has given way to localized stabilization initiatives, small-scale targeted investments, and limited reconstruction projects. In recognition of this trend, the United States Treasury Department announced in May 2022 the issuance of Syria General License 22, permitting external entities to invest in select areas across Syria’s north, free (in theory, at least) of sanctions scrutiny.

The shift in perceptions and policy approaches toward northern Syria in recent months directly reflected the region’s apparent, albeit relative, stability. Nevertheless, incidents of inter-factional fighting between rival Syrian opposition groups in northern Aleppo’s countryside have remained commonplace, though Turkey has until now stood by to put a lid on any spiraling escalation. This time around, things appear different.

On Oct. 11-12, tensions again spiked between al-Jabhat al-Shamiya and the Hamza Division following the murder of an opposition activist and his pregnant wife. As attention focused on a hunt for the perpetrators, allegedly hiding in a camp for the displaced in al-Bab, the jihadist group Hayat Tahrir al-Sham (HTS) dispatched its fighters from greater Idlib eastward into the district of Afrin. From Oct. 12 to 13, HTS fighters swiftly expanded northeast, taking full control of Afrin city and at least 26 towns and villages to its southwest, most without a fight. Granular local reporting has been spotty, yet it appears that these transformative events have resulted in fewer than a dozen combatant fatalities.

Since a Turkish-led incursion into Afrin in early 2018, the region has been controlled by a coalition of opposition factions often known collectively as the Syrian National Army (SNA), an umbrella assemblage whose dependence on Turkey and its anti-Kurdish agenda has since seen it lose much of its earlier “opposition” credibility and, instead, collapse into a stagnation driven by warlordism, corruption, and infighting. Nevertheless, despite the SNA’s many weaknesses and shortfalls, Turkey has until now appeared determined to sustain the group’s control in Afrin and the neighboring northern Aleppo region known as the Euphrates Shield zone. Doing so has ensured that Syria’s recognized opposition bodies, both the ETILAF coalition and the Syrian Interim Government (SIG), have maintained a territorial holding inside Syria.

Until a day ago, Turkey has maintained a de facto veto on allowing HTS into the Afrin or Euphrates Shield regions. In June 2022, when HTS made a brief foray into Afrin’s southwestern countryside (again opportunistically taking advantage of intra-SNA tensions), a phone call from a senior figure within Turkey’s National Intelligence Organization (MIT) saw HTS forces turn back and return to Idlib. On this occasion, no such Turkish order appears to have come; and while associated fighting continues around al-Bab and HTS-sympathetic SNA groups have captured the al-Humran crossing point into Manbij (controlled by the Syrian Democratic Forces), concern is now mounting that HTS intends to expand further toward Azaz.

On the surface, HTS’s drive to expand its rule is unsurprising — the militant group’s public rhetoric and that of its leader, Abu Mohammed al-Jolani, have made its desire to do so clear for a long time. In fact, an HTS-linked construction project has been engaged for months in expanding and resurfacing the main road heading from its territories toward Jindires, where HTS’s expansion began, on Oct. 12. Beyond physical action, HTS “diplomacy” has also made clear its eastward intentions. In 2020 and 2021, senior HTS figures, including Jihad Issa al-Sheikh (Abu Ahmed Zakour), Maysar Ali Musa al-Juburi (Abu Mariya al-Qahtani), and Abu Tawfiq, led a sustained and secretive channel of dialogue with elements of the SNA potentially open to some form of détente or even cooperation. By the time that initiative fizzled away in early 2022, speculation turned to a potentially more assertive HTS approach to expansion, including through arrangements allegedly sealed with the likes of the Sultan Suleiman Shah Division in July 2022.

In seeking to expand, HTS believes that through its subordinate and semi-technocratic Salvation Government in Idlib, it maintains a governance project superior to that of its rivals across Syria’s north. In conducting outreach to foreign governments, deconflicting and coordinating with the aid mission run by the United Nations, and seeking to open trade crossings into regime areas, HTS has sought to demonstrate a level of pragmatism necessary to compete with its more mainstream rivals. In attempting to replace the SNA model in Afrin, HTS is using its age-old argument that it is combating corruption and putting an end to costly division; but in Jolani’s eyes, the greater his control the more secure his position. In a public statement on Oct. 13, HTS expressed its “hope” that Afrin’s residents would trust that “the Arab and Kurdish people are the subject of our attention and great appreciation,” and “it is our duty to protect them.”

That arrogance may prove to be a miscalculation though. While Turkey was swift to “crack the whip” in June and force HTS to return to Idlib, it has clearly not done so this time. It is impossible not to read into the fact that Turkey’s most trusted and loyal proxy, Faylaq al-Sham, vacated all its checkpoints along the main road to Afrin on Oct. 12, in an unusually swift and coordinated fashion; since then, HTS’s advance has proceeded virtually unchallenged. Although Faylaq al-Sham has a reputation for avoiding any inter-factional conflict, its sudden and coordinated disengagement raises the question: did the Turks greenlight HTS’s move into Afrin, or did Ankara merely decide to allow it to happen regardless, simply accepting an inevitability and resolving to deal with the consequences?

Amid wider speculation about the state of Turkey’s Syria policy and rumors of a possible Turkish re-engagement with Assad’s regime, an HTS takeover of Afrin only weakens Syria’s opposition and empowers regime rhetoric about countering terrorism. An expanding HTS may also complicate the upcoming January 2023 vote on cross-border aid into northwestern Syria. Or, on the other hand, does an HTS takeover of Afrin provide a better guarantee of stability compared to the inter-factional chaos of SNA rule? Even if Turkey does eventually force HTS to vacate Afrin, the fact that it advanced this far has crossed a line and irreversibly changed the power dynamic in the area.

Another intriguing issue resulting from HTS’s expansion into the Afrin region is what effect this will have on the many jihadist leaders and jihadist civil society critics who fled HTS territories to Afrin in 2021 and 2022. HTS’s aggressive campaign against ISIS cells, al-Qaeda’s affiliate Tanzim Huras al-Din, and other jihadist factions deemed loyal to either ISIS or al-Qaeda or critical of HTS rule has ensured its unchallenged control over Idlib. But many of those opponents may now find themselves back under HTS’s authority — and scrutiny.

It is too early for any easy answers. However, what is clear is that the dynamics of northwestern Syria are shifting, and the consequences look likely to be extremely significant. The rules and assumptions that have guided assessments of northwestern Syria are eroding before our eyes, and the new reality looks set to become even more complex than before. All eyes should now be on Azaz, the gateway into the Euphrates Shield zone. In Azaz, al-Jabhat al-Shamiya has initiated a general mobilization to prepare for a potentially imminent assault by HTS, whose forces are currently attacking the town of Kafr Janneh, just 10 kilometers down the road. Were Azaz to fall under HTS control, northern Syria would be entering an entirely new era with potentially profound implications for the overall state of Syria’s crisis.

Charles Lister is a senior fellow and the director of the Syria and Countering Terrorism & Extremism programs at the Middle East Institute.