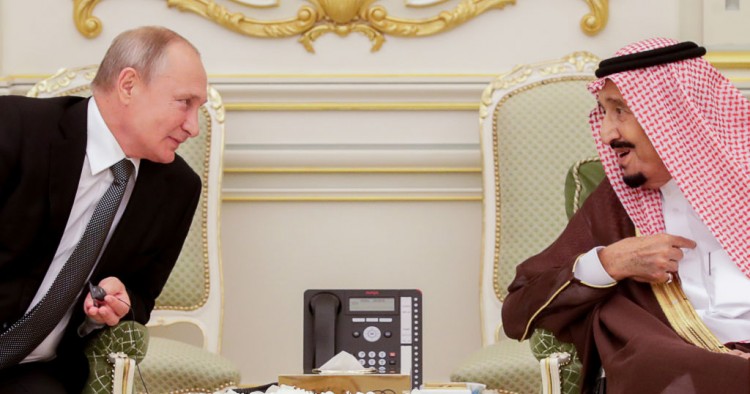 Russian President Vladimir Putin is taking his star turn through the Gulf, as he visits Saudi Arabia and the UAE for the first time since 2007. His state visit is being received by the leaders of the two key U.S. partners as a critical development in addressing the fraught regional security balance. Putin, for his part, has made clear that he views Russia’s role increasingly as a mediator in the region. As he visits the Gulf, the Kremlin is advertising Russia’s efforts to intercede in Syria between warring Turks and Kurds and indicating that Russia “will not play favorites” between the GCC states and Tehran — a clear signal to the Gulf states that Russia is ready to balance its relations between the GCC and Tehran. Putin’s visit is cementing growing Saudi-Russian economic ties, including signing a score of bilateral investment agreements, mostly related to the energy sector. The Russians are clear that they would also be delighted to sell more defense equipment to the Gulf states, including the S-400 air defense system recently acquired by Turkey.

Putin’s timing is fortuitous for Russia. His visit takes place as the U.S. position in the Middle East collapses in the face of a series of misjudgments and “own-goals” by the Trump administration.  The abrupt withdrawal of U.S. forces from Syria and the abandonment of the Kurds is only the latest action undermining regional confidence in the U.S. Donald Trump’s inept response to a series of increasingly provocative moves by Iran in the Gulf, and his comments distancing the U.S. from its commitments to defend Gulf partners over the summer months, had already generated doubts in regional capitals about the wisdom of relying on a U.S. security umbrella. The dispatch of hundreds of additional U.S. military personnel and equipment to Saudi Arabia will do little to change the perception of an administration that is all talk and no action.