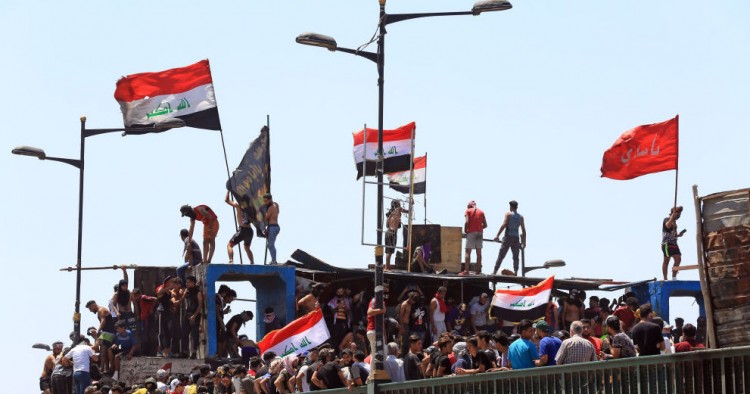 The appointment of Mustafa al-Kadhimi as the new Iraqi prime minister has brought with it both positive indications of a push toward systematic change, as well as violent protests across a number of provinces in a country already on the brink.

As part of a package of first decisions made upon his appointment, the PM ordered the immediate release of protesters in detention since Oct. 1, 2019, including those who have already been convicted with light sentences, a move that enamored him to civil society broadly. He also ordered an immediate review of the electoral law to begin the process of constructing a new electoral framework. Finally, he reinstated the popular army general, Abdul-Wahab al-Saadi — revered by the Iraqi public for his role in the war against ISIS — back into active service, appointing him commander of the Iraqi Counter-Terrorism Service. Saadi’s removal in September 2019 was one of a number of triggers that sparked the protests that grew into the “October Revolution.”

Despite these early positive signs, protesters have returned to the streets after weeks of suspended protests owing to the COVID-19 outbreak and the curfew imposed across Iraq as part of the pandemic response. With violent scenes spreading online, conspiracies related to infiltration of the movement and deliberate agitation by violent aggressors are now circulating, both across social media and among the intelligentsia.

However, renewed protests should come as no surprise — even if al-Kadhimi has provided positive signals to the protest movement in his early days as PM. The process to appoint him saw the failure of two previous PM-designates and has kept the protest movement out of the circle of influence. Coupled with the COVID-19 pandemic, that reduced the protesters’ physical presence significantly and led to a loss of momentum and influence on the political elite. Nevertheless, previous trends of mass mobilization across the MENA region show that, at a time when there is a new government, protests often reappear and even intensify as new actors in charge drive renewed and increased calls for accountability from the ground. Furthermore, the need to be acknowledged and relevant begins to border on the almost desperate. Violence in protests, such as that seen in Baghdad and Basra in recent days, tends to lend itself to both a number of violent agitators that exist in any movement — whose role is more visible when protests are small in number — and a significant lack of female presence, which tends to reduce tensions, and by default the risk of violence breaking out within protests.

What the protests are, however, is a reminder to the new PM that anger is real, it has not dissipated, and demands for accountability and improved governance are as strong today as they were five months ago. It is also a strong reminder that, adding recent failures to inherent long-term structural deficiencies, PM al-Kadhimi has even less time than his predecessors to enact change that will truly benefit people’s lives.

Hafsa Halawa is a non-resident scholar at MEI and an independent consultant working on political, social and economic affairs, and development goals across the MENA and Horn of Africa regions. The views expressed in this piece are her own.