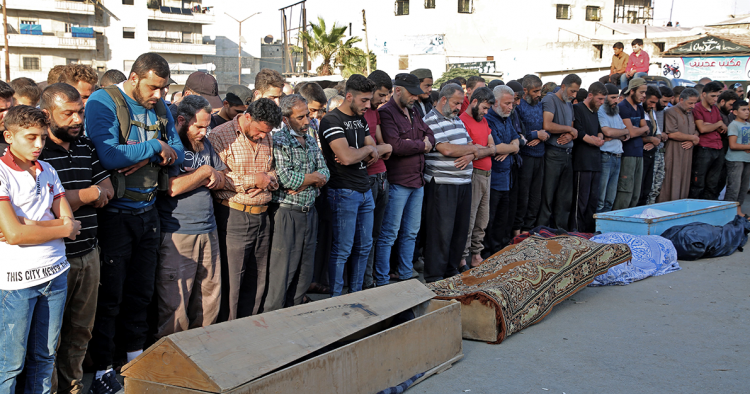 More than 75 Syrian opposition fighters were killed and over 100 others wounded this morning in a Russian airstrike that hit a graduation ceremony for newly trained fighters amid a purported cease-fire in Syria’s Idlib Province. The strike — one of the deadliest in Syria’s nine years of conflict — targeted a headquarters of Faylaq al-Sham, Turkey’s closest and most dependable proxy in Idlib, whose personnel provide security to the more than 80 Turkish military posts that span the contested region. Faylaq al-Sham, a group ideologically close to the Muslim Brotherhood, likely lost an entire fighting unit in the strike.

Idlib’s cease-fire was the outcome of a tense meeting between Russia and Turkey in March 2020, which had been prompted by an unprecedented five-day-long Turkish air campaign that dealt an enormous blow to the Syrian military and had forced fighting to a standstill. In the months since, regime artillery and Russian jets have regularly violated the cease-fire with relatively minor actions, but today’s incident threatens to unravel Idlib’s relative stability altogether — with profound consequences. The three months of hostilities that preceded the negotiated cease-fire in March displaced over a million civilians — the largest single incident of displacement of Syria’s crisis by a margin of three. A re-escalation threatens to at least replicate such a humanitarian crisis, if not spark one far worse amid a spiraling COVID-19 crisis and an impending winter.

Today’s strike should be seen both within the microcosm of Idlib geopolitics, but also within the context of heightening Turkish-Russian tensions in Syria, Libya, and Azerbaijan. It is possible that despite the unprecedented scale of today’s incident, it will be de-escalated via a call between Russian President Vladimir Putin and his Turkish counterpart Recep Tayyip Erdogan, but it appears more likely that this could trigger some form of Turkish response aimed at reinforcing the deterrence it appeared to have established by air in March. With Turkish-Russian joint patrols of Idlib’s M4 highway already on pause and negotiations on how best to proceed frozen, it is an open secret that escalation was on the table. In recent weeks, Turkey has reinforced its military posts around the M4 with tanks, heavy artillery, and self-propelled howitzers in a clear sign of its intent to hold the line.

Ultimately, those set to suffer the most in this game of “poker” are Idlib’s enormous population of 3 million civilians, most of whom have been displaced multiple times and now live in temporary or tented accommodation.

Charles Lister is a senior fellow and the director of MEI's Syria and Countering Terrorism and Extremism Programs. The views expressed in this piece are his own.