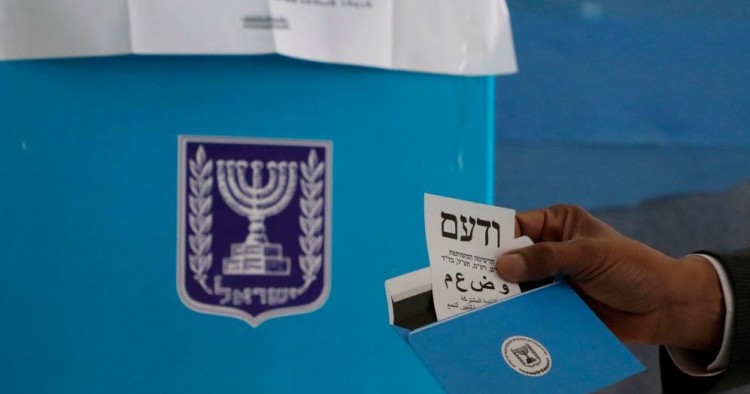 Israelis vote on Monday, March 2, for the third time in less than 11 months, with little prospect that the deadlock that has caused the multiple elections will be broken. Not unlike other countries, a bitter polarization envelopes the populace, and the polls have barely changed in the last year. In Israel’s case, though, the differences are not ideological; the election is not being fought on issues, since the two largest parties, the Likud and Blue-White, are not very different on policy. Rather, it is one man whose insistence on retaining the premiership is holding the entire country politically immobile: Benjamin Netanyahu, who, besides being Israel’s longest-serving prime minister, is under indictment for fraud and breach of trust, with his trial due to start on March 17.

Since the beginning of this century Israel’s once free-wheeling political system has solidified into two large “blocs,” each retaining the allegiance of about half the electorate. The blocs themselves are immensely disparate: the “Right” bloc includes far-right secular and “National Religious” settlers, “ultra-Orthodox” (Haredi) Jews, and more moderate nationalist-oriented free marketeers, among others. The “Left” is even more dissimilar: the centrist Blue-White, the center-left ex-socialist Labor-Meretz-Gesher coalition, and the predominantly Arab “Joint List” (which itself contains Islamists, Communists, and Arab nationalists) are forced to run together out of fear that individually most would not make the minimum threshold. Now strangely enough, the latter’s enforced unity has made them likely to receive 14-16 Knesset seats, unprecedentedly strong but still subject to the unwritten rule that “Arab parties” are never invited to join a governing coalition.

Most Israelis are already convinced that there will be a fourth election in a few months, but there are unknowns that may indeed make this one the charm. First, the polls are notoriously unreliable and the shift of a few thousand votes between or even within the blocs could change the outcome (under Israel’s proportional representation system each Knesset member will represent approximately 40,000 voters). Second, both politicians and populace are sick of a pointless political process, and politicians, as in every country, do not necessarily hold to pledges “never” to do one thing or another. Third is the coronavirus. While Israel has only a few cases reported, 7 percent of the respondents in a recent poll reported they “might not” vote because of fear of the virus. In a closely divided electorate, that might change the calculus significantly.

In any case, though the vote totals may be known by the time you read this, coalition negotiations generally take up to six weeks until a government is actually formed. So don’t hold your breath.