A serious blow to the prospect of joint patrols in Idlib 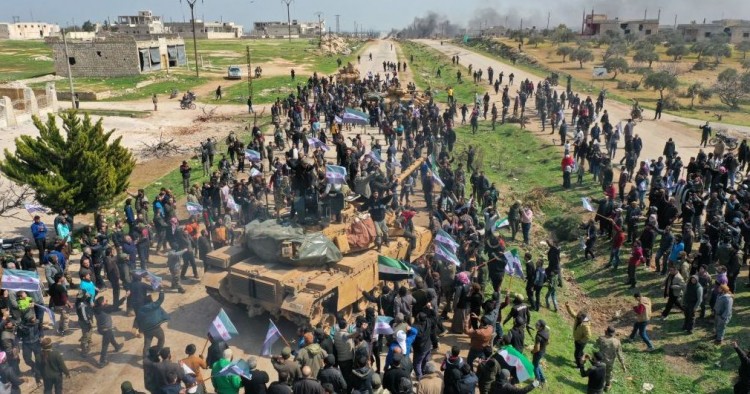 On March 5, Russia and Turkey agreed to begin joint military patrols of the entire stretch of M4 highway running east-to-west through opposition-controlled Idlib on March 15. As per the agreement, the patrols would exist in order to enforce the establishment of a “secure corridor” 6 km deep on both the north and south sides of the highway. The implications implicit in the agreement were immediately clear and problematic: the opposition and associated jihadist groups were expected to cede territory they controlled south of the M4 — a zone of mostly mountainous terrain that in military terms was of immense value. Public statements by senior Turkish officials in the days since reiterated those expectations, despite providing no clarity on how such a territory transfer was meant to occur.

What made matters even more troubling was the inflammatory scheduling of the first patrol for March 15 — the 9-year anniversary of the Syrian revolution. In advance of the first patrol, Turkish military and intelligence officers convened a meeting on March 14 with the leadership of Turkey’s primary armed opposition partner, the Syrian National Army (SNA), and its principal Idlib-based actor, the National Liberation Front (NLF). Turkey informed the NLF that the first patrol would begin in the village of Tronbeh at the eastern-most end of the M4 and head to Ariha — a total journey of 19 km. According to my sources, NLF figures rejected Turkey’s proposals and made it clear that the NLF would not facilitate joint patrols within their territory. At the meeting’s conclusion, a majority of the NLF’s leadership quit their posts, including NLF commander-in-chief Fadlallah al-Haji.

By March 14, civilian communities located along the M4 had set up rudimentary roadblocks, using vehicles, concrete and rock boulders, and burning tires. Late that night, several armed groups laid razor triangle spikes along the M4’s approach to al-Nayrab, just 2 km from Tronbeh. Early on March 15, Turkish armored vehicles attempted to clear the M4 of roadblocks but were repeatedly forced away by civilian protestors, some of whom threw rocks or climbed atop the vehicles themselves. Though Turkish and Russian vehicles did convene for the patrol, they traveled less than 2 km before turning around outside al-Nayrab.

This was an inauspicious start for a plan that from the outset was riddled with holes. The Tronbeh-al-Nayrab test patrol would have represented only 25 percent of the intended 80 km of the M4 requiring joint patrolling, but in the end, Russia and Turkey only managed 2.5 percent. Worse still, the Tronbeh-al-Nayrab stretch is located within NLF territory and is largely devoid of more troublesome, deeply irreconcilable jihadists. That night, several clashes were reported along frontlines, as well as the first opposition anti-tank missile strike in more than a week. Not only was the prospect of joint patrols dealt a serious blow, so too was the cease-fire surrounding it.