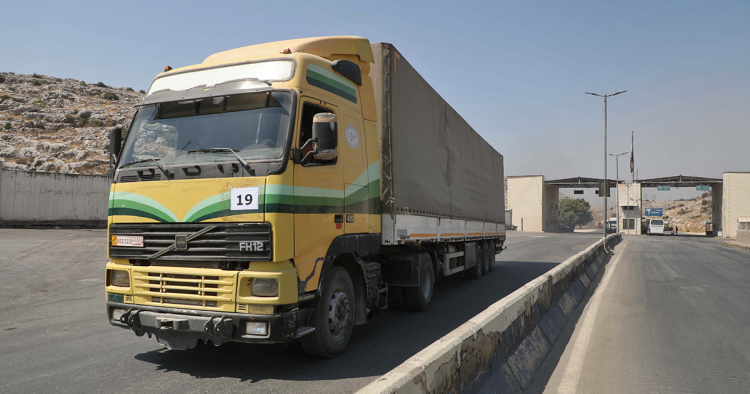 A Jan. 20 United Nations (U.N.) Security Council briefing on Syria attracted a rare bit of attention last week, after U.N. Special Envoy Geir Pedersen described a “slow tsunami … crashing across Syria” amid economic collapse, humanitarian suffering, and a stagnant political process. Those comments were accurate and shocking, but nothing new. What appears to have been glossed over was arguably of far greater consequence: an apparent confirmation from Russia’s ambassador to the U.N., Vasily Nebenzya, that he does indeed intend to veto any extension to cross-border aid access into Syria (currently limited solely to Bab al-Hawa in the northwest) in a vote scheduled for July 2021. Worse still, U.N. aid chief Mark Lowcock declared in the same briefing that efforts to negotiate a cross-line aid delivery mechanism from Damascus to Syria’s northwest had failed.

Should nothing change, the loss of cross-border aid access and the absence of cross-line mechanisms to northern Syria could potentially leave over 4.5 million civilians without assistance — a humanitarian catastrophe of unprecedented proportions. While Syria’s regime has consistently weaponized aid to its advantage over the past decade of conflict, Russia’s U.N. veto has taken that to the highest and most potent diplomatic level. With a third of the country still out of regime hands and COVID-19 an ever-present but largely invisible threat, this Russian-led strategy aims to instill a new kind of terror to coerce communities to surrender to regime rule. In a country with at least 6.7 million internally displaced people, where 85% of the entire population now live under the poverty line and 9.3 million are food insecure, it is a morally repugnant extension of the brutal military conflict that has already left over half a million dead.

With the U.N. vote a mere six months away, this is a foreign policy issue deserving of urgent attention from the new Biden administration — one that requires a major and focused diplomatic effort, both from the U.S. and in concert with allies. While consideration of the grand scope of Syria policy can give way to cynicism and skepticism, humanitarian assistance should be an opportunity for both strategic and moral results.

Already, the U.S. and Europe provide roughly 90% of U.N. assistance to Syria, and yet Russia, which accounts for only 1%, is exerting control over the strings. Meanwhile, U.N. aid channels coordinated in Damascus have been deeply corrupted and tied intrinsically to networks of regime-linked distributors, security companies, and associated “charities.” Consequently, while we may be providing the vast majority of aid, our generosity is being manipulated in pursuit of the regime’s domestic interests. To sustain access in Syria’s capital, even the World Health Organization’s (WHO) COVID-19 response has continued to parrot regime data and statements, effectively contributing toward a cover-up of the disease’s deadly spread. Two weeks ago, the WHO even publicized its use of Syrian airline Cham Wings for operations to Libya, despite it being sanctioned for its role in transporting pro-regime militiamen from Iran to Syria and its recent use for ferrying Russia-backed militiamen from Syria to Libya.

Ultimately, a determined effort is required to deter or neutralize regime interference in aid mechanisms originating in Damascus. This is not an issue of how much aid is being provided to Syria, but to whom it is being delivered. The U.N. and its associated bodies may be part of the current problem, but they also need to be part of the solution. As such, U.S. and allied pressure needs not just to focus on Syria and Russia, but on the U.N. itself to better ensure that regime restrictions and blackmail are not simply acceded to, as appears to have become standard. Bodies failing to meet pre-determined criteria should have their funding channels cut, until improved protocols are put into place.

In parallel to efforts aimed at achieving something close to unrestricted access from Damascus, the U.S. and allies must also explore viable avenues for continued cross-border access via Turkey and/or northern Iraq — should Russia follow through with its intent to veto a U.N. extension of Bab al-Hawa in July. Until 2014, the U.S. and international community provided substantial aid to these same communities without a U.N. Security Council resolution, and we may need to do so again. There is currently no sign that the nearly 5 million civilians living outside regime control in northern and eastern Syria are likely to surrender to regime rule in the coming months, so a fallback option in the form of unilateral cross-border assistance may be on the cards.