Syria tops the agenda as Erdogan heads to Washington 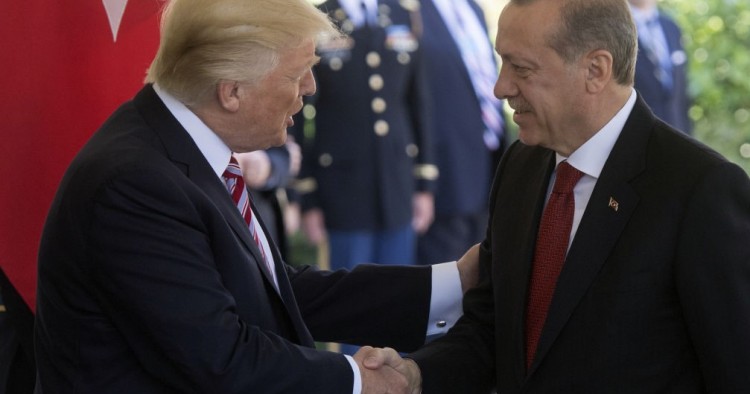 Turkish President Recep Tayyip Erdogan is set to meet with his U.S. counterpart, Donald Trump, in Washington on Wednesday. While there are doubtless other items for discussion on the agenda, at the top of the list is, at least on Turkey’s side, Syria — or more specifically, what U.S. policy is and should be in Syria. Since 2015 Turkey’s policy toward Syria has been either to totally eradicate or to pacify the growing threat from the Syrian Kurdish People’s Protection Units (YPG) on its southern border. That threat remains, but it is greatly diminished. Ankara’s policy toward Syria has evolved and aims to help build a Turkey-friendly Arab statelet in the territories now under its military control. Despite Turkey’s rhetoric to the contrary, it has literally been state building in the territories it captured first from ISIS and then the YPG. These territories would serve not only as “safe zones” for Turkey, but also as potential areas to settle its Syrian refugees, of which it is home to more than 3.6 million.

Yet, to realize its objectives Turkey needs the U.S. at the very least to balance Russia and Iran in Syria. The problem is, the U.S. seems not to be interested in doing that. As Ankara sees it, the Congress, think-tank community, and the U.S. media care only about the YPG’s safety, nothing else, and President Trump is eager to pull out totally from Syria and leave it completely to Russia. Ankara, for its part, definitely wants the U.S. to stay in Syria, but on its side. Given the anti-Turkey and anti-Erdogan sentiment in Washington, Ankara can achieve that only if the U.S. pursues a strategic objective in Syria. That should be President Erdogan’s ultimate aim during his visit to Washington: to chart a strategic course for the U.S. in Syria. What Ankara should realize, however, that such an undertaking will require more than just persuading President Trump, who has his own battles to fight at home.

Birol Baskan is a non-resident scholar at the Middle East Institute.