The Taliban holds the upper hand in intra-Afghan talks 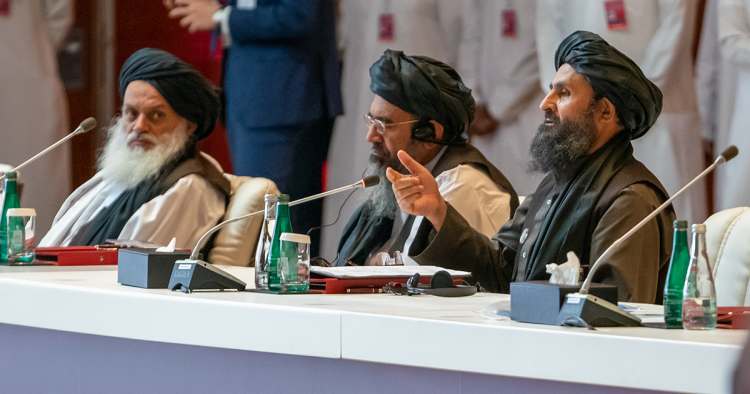 The ongoing intra-Afghan talks confirm, without a doubt, that the Taliban is negotiating from a position of remarkable strength. After being overthrown by the military of the world’s sole superpower two decades ago, the Taliban’s resurgence is a perfect example of what happens when a counterinsurgency campaign fails to eliminate its target’s safe havens. The Doha negotiations have also underlined the ugly reality of the Afghan conflict — that firepower alone cannot crush an insurgency when its narrative has some resonance with the local people.

The intra-Afghan dialogue has the formidable task of preparing a road map for the Taliban’s transition from armed insurgency to responsible governing partner. The United States and its Afghan allies in the political mainstream may have many expectations for the talks, but no one expects the Afghan Taliban to give up its trump card: violence. It was through indiscriminate violence in the form of bombings, suicide attacks, and assassinations that the Taliban forced the key stakeholders to the negotiating table in Qatar in the first place.

To eliminate the Taliban’s tactical advantage, the government has called for a cease-fire for the duration of the talks. This is a sensible demand because ending hostilities would help to create an environment for constructive dialogue. But until the broad contours of the power-sharing in Kabul are finalized, the Taliban will not agree to a cease-fire. Who in Washington and Kabul would take the Taliban seriously if it renounced its capability to inflict harm? To use President Donald Trump’s words, the Taliban’s “tough” commanders will continue to exert the power of their guns even as its “smart” negotiators use all available diplomatic tools to impose their will. Peace processes are often lengthy and frustrating, and it is highly unlikely the intra-Afghan talks will have concluded before the U.S. presidential election in early November. Accelerating the process to meet Trump’s campaign agenda would be detrimental to peace in Afghanistan.

Having demonstrated its military prowess, the Taliban bolstered the legitimacy of its claim to head the national government in the eyes of the international community as well as the Afghan people. The Taliban has shown extraordinary resilience, and the February 2020 deal with Washington has validated many of its crucial demands.

As far as the Taliban’s integration into a transitional government is concerned, the U.S. will have to play an important role in building consensus among warring parties. A compromise that establishes such a governing arrangement can only be reached if the Taliban is able to guarantee the rights of all Afghan citizens, including minorities and women.

The Taliban has stressed that maintaining an “Islamic system” in Afghanistan is non-negotiable, but the group remains vague about what, in concrete terms, such a system might entail. The Taliban is insistent on implementing its version of Islamic rule across Afghanistan so that hardcore commanders, cadres, and sympathizers will not interpret its willingness to talk with Washington and Kabul as a compromise of principles for the sake of power. It is difficult to predict how the various factions could accommodate one another’s disparate beliefs on the role of Islam in Afghan politics without substantially changing the 2001 constitution. The current regime’s openness to potential revisions of the constitution will depend on Taliban’s acceptance of the basic principle that the legitimacy of laws ultimately derives from the will of the people, as it is this notion of popular sovereignty that preserves a role for elected legislative bodies within Afghan politics. The Taliban may also face resistance if it attempts to remove constitutional safeguards of minority and women’s rights. In any case, the Taliban will continue to have incentives to be inflexible as long as its patrons in Pakistan hold to their position on how Afghanistan should be governed and what foreign policy it should pursue.

Amid claims and counter-claims, accusations and counter-accusations, the only upside is that the Afghan people are ready for change after more than four decades of continued violence. With the U.S. preparing to leave at any moment, the Kabul government and its supporters are also desperate for peace. President Ashraf Ghani reflected this sentiment in a column published last month in The Washington Post, in which he wrote that the Afghan people’s desire for peace led the government “to take another risk for peace.” In the context of bilateral negotiations, whichever side presents the most united front in terms of its demands and objectives has an advantage. But the problem is that the Afghan political class remains deeply divided, and it is the Taliban that seems best positioned to exploit division in its ranks. If this dynamic holds, the willingness expressed by Gulbuddin Hekmatyar, head of the Hezb-i-Islami party, to break ranks and form an alliance with the Taliban may be only the first in a series of defections from the government camp.