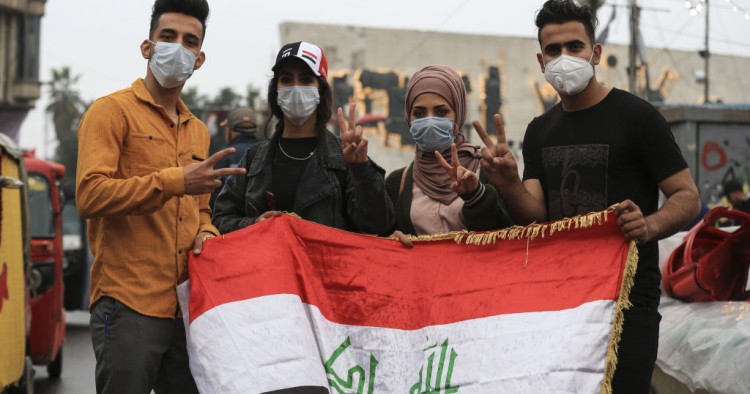 The nationwide protests that erupted in October 2019 shifted the political landscape and paradigm of Iraqi political participation: Led by motivated Iraqi youth in their teens and twenties with no previous civic experience, they signal a rejection of the post-2003 sectarian patronage system, known as muhassasa, that has failed to deliver security, economic development, or basic services. The protest movement’s spontaneity and authenticity are its core strength; no public figure or party directed the waves of protests across central and southern Iraq. Instead, the movement was a genuine expression of impatience with the status quo.

Translating calls for change into well-crafted policy and law will not be easy, however, especially in the coming year. Protesters will face new, significant challenges in 2020: the social disruption of COVID-19, a collapse in oil prices and reduced budget, a prolonged absence of government, and waning public attention. Enthusiasm alone may not be enough to cut the Gordian knot of corruption that rules Iraq.

How can Iraq’s young protesters move forward in 2020? Lessons learned from protests around the world in recent years have shown that, beyond guiding principles and general demands, leadership is essential as are practical objectives, tactics, and a strategy. In Sudan, for example, protests led by women and young people recently toppled decades of authoritarian rule; now the movement is focused on establishing a transitional government that bucks cultural norms and includes both women and young people in decision-making roles. In Hong Kong in 2019, a leaderless movement rallied around five concrete demands, energized pro-democracy candidacies, and won resounding electoral results. Finally, Venezuelan democrats made progress against the Maduro regime by creating an anti-regime coalition that secured two-thirds of seats in Parliament in 2015.

A good starting point is to establish a few clear objectives. Research from the International Republican Institute (IRI) — especially from recent focus groups in Basra and Ninewa — has highlighted issues of primary importance to Iraqis or “key issues.” These relate to the practice of governance (new elections, merit-based representation), institutions of governance (rule of law, security, accountability), and social and economic livelihood questions (better service delivery, greater employment). The governing elite has failed to deliver responsive policies on these issues, instead squandering the country’s wealth; activists, in turn, while effective at forcing the government to pay attention have neither generated leaders, nor articulated concrete policies or asks. While effectively leading to the resignation of Prime Minister Adil Abdul-Mahdi and his government, the sectarian approach that protesters mobilized against informed the selection of subsequent candidates. Half-hearted systemic reforms were furthermore put in place, such as reforming the parliamentary elections law and dismissing provincial councils.

Finally, the movement needs to cultivate real allies in government. To achieve meaningful changes to the muhassasa system, protesters can bet on a strategy of engaging existing governments reformers; building a new outsider political movement; or a mixture of both. The first approach is to rally behind existing leaders with liberal and reformist agendas, building bridges to Iraq’s heterogeneous political class. Iraq’s current leadership presents an opportunity to build bridges. The early signs of Prime Minister Mustafa al-Kadhimi’s tenure indicate that his government will be more tolerant of protest and advocacy, and willing to bring in independents in key government positions. While the state bureaucracy is staffed and sustained by political parties’ patronage networks, there are reformers inside it who could be drawn out and linked to protesters to serve as change makers from within.

The coming year will bring new challenges for Iraq’s young idealists — but with clear goals and some additional organization, they can create a sustainable movement that shapes policies and elections for years to come.