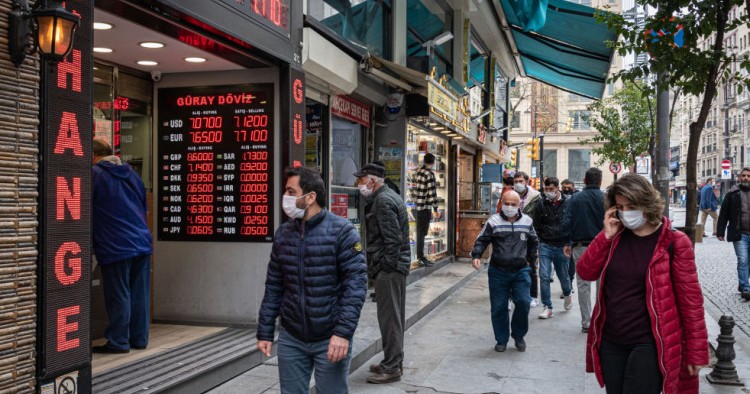 It is rare today for a story to penetrate the coronavirus media ceiling, but the threat to Turkey’s economic stability has succeeded. The Turkish lira has crossed the 7/1 ratio to the dollar once again, and Ankara is scrambling to push the currency back into safe territory. It will be difficult because Turkey has either run out of or refused to take advantage of good options such as an increase in interest rates or an IMF loan program.

One might recall the story of the 11th-century King Canute of England who ordered the tide to halt. An emergency conference call on May 6 to the financial community by Treasury and Finance Minister Berat Albayrak, President Recep Tayyip Erdogan’s son-in-law, produced no relief. During the call, the lira continued to slide and the yield on Turkey’s dollar-denominated bonds saw the greatest rise in a month. The central bank, under government control, has depleted its reserves dramatically by funding state bank interventions in defense of the lira. Turkey has asked the U.S. for a swap line for foreign currency funding; the U.S. has replied that commercial not political conditions will determine its decision and appears to be lukewarm about the possibility.

On the broader horizon, other factors appear. Turkey has external debt obligations of $170 billion this year. Fewer tourists and a growing trade gap seem to forestall a rapid economic bounce back. Foreign investors have pulled billions from Turkey’s stock market, frightened by the fall in central bank reserves.

Ankara is hoping that enough economic activity will appear in the coming months to restore the lira. The government seems to have managed the corona pandemic reasonably well thus far with daily deaths now back to end-of-March levels. At 62 percent, public confidence is relatively high. Short-term measures allowing refinancing of debt have been popular, but longer-term success depends on reviving consumer spending.

At bottom, Turkey’s biggest challenge is simple and clear. In Turkey’s economic emergency room, the doctors are using the Band-Aids of nationalism and protectionism and reassuring the family even though major surgery is required. Without true remedies, sooner or later the disease will reappear in graver form.

Ambassador (ret.) W. Robert Pearson is a non-resident scholar at MEI and a former U.S. ambassador to Turkey. The views expressed in this piece are his own.