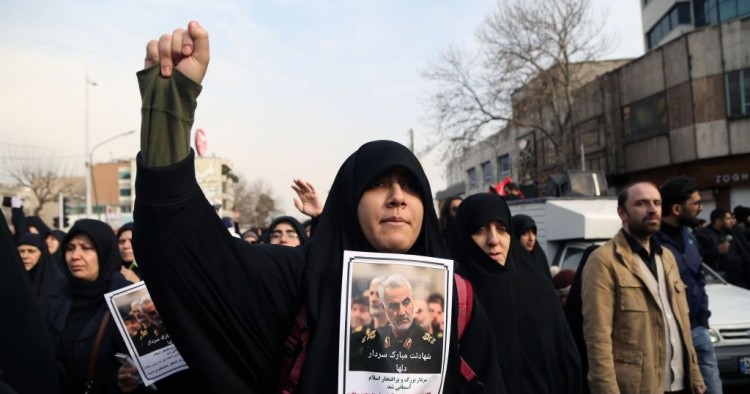 In 2020 Tehran’s policy of “maximum resistance” against the Trump administration’s “maximum pressure” campaign will be put to the test more than ever before. Domestic and foreign policy challenges will continue to abound for an Iranian regime that in 2019 came to the brink of losing control over an increasingly restless population. But while the fluidity of the situation in Iran makes predications particularly daunting, a few likely courses of action are clear.

Above all, the Trump administration’s assassination of Gen. Qassem Soleimani on Jan. 3 has definitively closed the door to any direct talks between Washington and Tehran in 2020. The best that can happen now is that the Iranian regime reaches the conclusion that there is an eventual need for dialogue with the U.S. and begins to prepare the ground. But the breakthrough can only happen once Donald Trump is out of the White House in either 2021 or 2025.

Tehran will do what it can to avenge Soleimani’s death, to save face at home and abroad, but it will not seek a direct military confrontation. That said, emotions will run high and the possibility of miscalculating and inviting a major U.S. response is a real risk that Tehran will take into account. Iran’s first choice will be to weaken the American presence in the region to the extent possible, starting with Iraq, a campaign that is already in full swing and will continue throughout 2020.

The Iranians have almost entirely abandoned their commitments to the 2015 nuclear agreement, citing non-compliance by other parties and Washington’s May 2018 decision to withdraw. Iran’s position on its ratcheted-up nuclear activities will not change in 2020 unless Tehran is somehow given relief from U.S.-led sanctions. In 2019, Tehran hoped the Europeans would deliver economic incentives to stay in the deal. That never happened and Europe is highly unlikely do so in 2020. In fact, the European position on Iran will likely toughen since the Germans, the French, and certainly the British under Prime Minister Boris Johnson will ultimately move closer to the Trump administration. But while Iran will stay in the nuclear deal in name only, it is unlikely to dash for a nuclear bomb in 2020 or withdraw from the Non-Proliferation Treaty (NPT). Neither will go down well with Russia or China, two countries that Tehran will seek to move closer to in 2020 to ward off American pressure.

On the home front, Supreme Leader Ayatollah Ali Khamenei, in close coordination with the leadership of the Revolutionary Guards, has a simple blueprint to survive in the short term: Any anti-regime protest will be crushed. Meanwhile, any political change will be instigated from the top down and not bottom up, meaning that Khamenei might accept the need for some concessions — such as allowing more candidates to run in the February 2020 Majlis elections — but the regime will not make overt concessions. Khamenei’s game plan is to merely make tactical changes to reduce pent-up frustration in society while pretending the public anger and protests are part of a foreign-led plot.

Another strategy of the Khamenei-Revolutionary Guards circle is to present the Iranian people with a bad choice and a worse choice. The “bad choice” is that the Iranian people should be patient and accept the state of affairs since the country is essentially said to be in war against the U.S. But, the Khamenei-Revolutionary Guards camp claims, this will soon blow over and the Islamic Republic will survive.

The “worse choice” is that alleged foreign plots succeed and Iran becomes another Syria. In fact, the idea of a civil war and the “Syriazation” of Iran are increasingly the talking points of key regime officials. Recent claims by Tehran to have confiscated U.S. weapons coming in from Iraq are part of this game plan. Khamenei and the Revolutionary Guards are hoping that by invoking images of a “civil war” instigated by foreigners, they can demobilize a good part of the Iranian public. The regime’s calculation is simple. It knows that Iranians are angry with the state of affairs but fear the idea of civil war more than having to live with the Islamic Republic.

In 2020, Khamenei will be busy preparing for what happens after he dies. In 2019, Khamenei replaced some key top officials in charge of massive economic organizations and operations in Iran. Meanwhile, in his last full year as president, Hassan Rouhani will continue to be unable to make up his mind about whether he wants to be a transformative president or merely an underling of Ayatollah Khamenei. Rouhani made headlines in 2019 by declaring that people should not have expectations from him since he has “no power.” This was certainly a jab at Khamenei and the organs he controls, such as the Guardian Council and the judiciary, that have the power to stop the legislative process that takes place in the Majlis.

Rouhani’s comment that “no change in Iran is possible until distribution of power is changed” was not only an attack on Khamenei but also shows that he may be looking to create some distance from the supreme leader. There are two possible reasons for this. First, Rouhani does not want all of the blame for the country’s economic and social problems. Second, Rouhani wants to present himself as a “moderate” who would be a different kind of supreme leader should he be able to succeed Khamenei. But his time as president is almost up and it is highly unlikely that Rouhani will be able to shift Iran’s domestic and foreign policy course in 2020. That is already decided by Khamenei and the Revolutionary Guards, and Soleimani’s assassination has injected a big dose of Islamist militant revolutionary zeal in their political vein.