As a US-Taliban deal nears, the Afghan government is fracturing 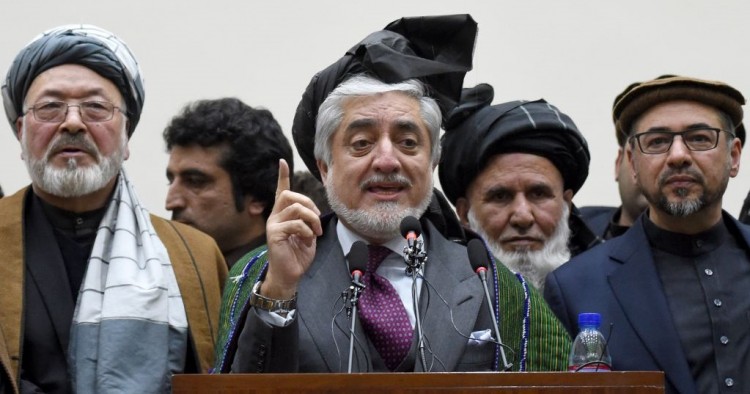 As the U.S. and the Taliban head toward the signing of an agreement on an American troop withdrawal in Doha on Feb. 29 and Afghanistan has entered a week when a negotiated period of reduced violence is being tested, the Afghan government is fracturing. Following the long-delayed announcement of the final results of last September’s presidential election, Dr. Abdullah Abdullah, the leading opposition candidate, has denounced them as fraudulent and declared himself the winner. He appears to be trying to establish a parallel government and has already sought to appoint new governors. While President Ashraf Ghani’s regime refuses to give ground, the risk of nationwide disturbances is very real.

Tellingly, the U.S. has failed thus far to formally recognize Ghani’s reelection. After a similarly disputed 2014 contest between Ghani and Abdullah, the U.S. accepted the results but then headed off a threatened conflict by having Secretary of State John Kerry step in to mediate the formation of a unity government. This time it is more complicated. There is an incumbent administration heavily invested in holding on to power. The utter failure of the unity government experiment has made a compromise similar to 2014 almost impossible to conceive. Moreover, the leverage the U.S. then held is now far diminished. The U.S. has made clear its intention to free itself from Afghan entanglement and there is no disinterested figure of Kerry’s caliber to mediate. The stakes are also higher than before. If intra-Afghan talks commence, the sitting government will play the lead role in determining the kind of state that will emerge in Afghanistan.

It may be that in the end, a weakened Ghani regime will survive, if only because the alternative of an inclusive interim government would be almost as difficult to form as a power-sharing arrangement with the Taliban. Afghanistan’s experience with an alternating presidency in the 1990s was a total disaster, triggering a brutal civil war. For all of Abdullah’s determination, his team may be in a comparatively weaker position than in 2014. He lacks the united support of several key opposition figures and in typical Afghan fashion a number of his allies can probably be counted on to change sides in exchange for favors from the government. Regardless of how the drama plays out, the Taliban is no doubt enjoying watching its adversary at war with itself.