Water dispute with Ethiopia is an existential issue for Egypt 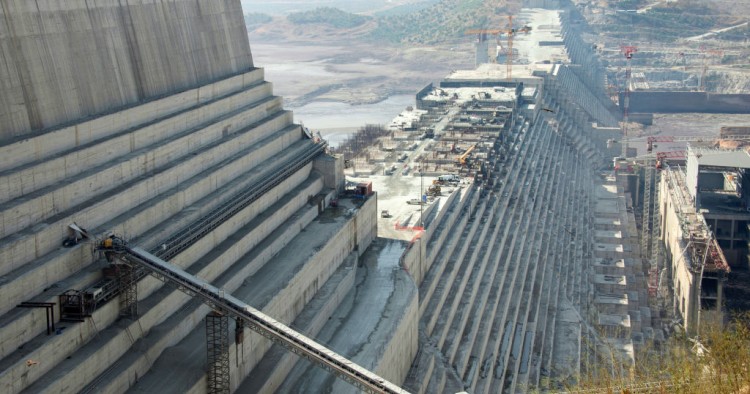 Precisely 11 days after he was awarded the Nobel Prize for Peace, Ethiopian Prime Minister Abiy Ahmed was talking about a war.

To put matters in context, he was referring to the steady escalation of the disagreement between his country and Egypt over the Great Ethiopian Renaissance Dam (GERD). Currently almost 70 percent complete, the giant upstream dam, which can hold the entire annual rainfall of the Nile, has the capacity to essentially turn the taps off on Egypt, depriving the country of the river water that supplies a mind-numbing 90 percent of its fresh water. The negotiations are actually tripartite — Sudan, which is also directly affected by the GERD but to a significantly lesser extent, appears to have come to an understanding with Ethiopia over water for agriculture and electricity.

To be fair, Ahmed was addressing the Ethiopian parliament and elected leaders are seldom as beleaguered and eager to please as when facing their own legislative bodies. He was careful to add that although Ethiopia could “mobilize millions,” negotiations were the best way forward. Additionally, it appears that he may have been responding to two instances in the Egyptian media where writers had said that, considering the severity of the situation, if all else failed, then a military option should be explored.

That has not been the declared position of the current Egyptian government, which has slogged through one unsuccessful round of mediation after another over the past seven years.

There are several areas of contention. Typically, under customary international law, dams of this size must have an environmental impact study of the effects on the downstream countries ready before construction. Ethiopia has yet to produce one and, according to the Egyptians, is still blocking a mutually agreed upon study on the effects of water salinity and salt water intrusion in the Delta. However, the primary issue of contention between Egypt and Ethiopia has been the speed at which the reservoir is to be filled. During the filling period, less water will flow downstream to Egypt. Ethiopia had originally declared its intention to fill the dam over five to six years while Egypt angled for a period of up to 12 years. The timing is vital because in the event of a drought (a cyclical event in the region, often lasting up to seven years), the amount could make the difference between hardship and catastrophe. Successive back and forth has moved the Ethiopians to push for a three-year timeline while Egypt is sticking at seven years. It’s technically complicated but the main issue has never been the technical hiccups — it’s the political will. For the Ethiopians, the dam represents more than simply a source of urgently needed electricity for both domestic use and international sale. For Ethiopia, the GERD is a domestically funded source of national pride and the sooner it’s in operation, the better.

However, the issue is one of existential importance to Egypt. It was Herodotus who called Egypt “the gift of the Nile” in 450 BCE and it’s still accurate nearly 2,500 years later. Almost 85 percent of Egypt’s Nile water supply starts off as rainfall over Ethiopia, becoming the Blue Nile, before it merges with the White Nile. The combined resulting flow makes up nearly 90 percent of Egypt’s total external supply. To further complicate matters, almost 97 percent of Egypt’s total water supply comes from external sources. Millennia of heavy agricultural use via wasteful flood irrigation, poor governance, pollution, and a burgeoning population have taken a heavy toll on the country’s water resources. Egyptians already have one of the world’s lowest per capita shares of water, at 570 cubic meters per annum, and it’s estimated that that figure will drop to 500 cubic meters, representing “absolute water scarcity,” by 2030.

The government is frantically trying to make up for Egypt’s having taken the Nile for granted over the millennia. If nothing else, the years of negotiations over the dam have provided successive governments with impetus to try to improve the efficiency of its water usage by moving farmers away from water-intensive crops (no easy task) and strengthening local accountability for water supply, use, and sanitation. The Nile Waters Agreement, a 1959 colonial relic which Ethiopia was neither party to, nor recognizes, gave Egypt 55.5 billion cubic meters of water annually. Internal water sources round the number up to around 58 billion. Egypt uses about 80 billion cubic meters a year in total, and the difference is made up with a combination of water reuse and virtual use. The first is self-explanatory. Egypt currently has the largest volume of reused agricultural water in the Middle East; water is reused up three times, for a water use efficiency of over 80 percent. Egypt also has one of the highest rates of wastewater treatment in the region, although it has yet to use it sufficiently. The second essentially refers to the importation of food.

The wisest use of water resources, however, will not mitigate a catastrophe if an agreement is not reached. It is in the interests of both parties, and both countries have much in common — growing populations and a need to boost their economies by creating jobs and attracting investment. Sabre rattling is never a good FDI lure. A few days after Ahmed’s remarks, he met with Egyptian President Abdel-Fattah el-Sissi on the sidelines of Russia’s first Africa conference, in Sochi. The event, cohosted by President Vladimir Putin and Sissi, as current head of the African Union, drew representatives from every one of the 54 African countries invited, including 43 heads of state. Putin offered to mediate between Ethiopia and Egypt, echoing an offer by the United States to do the same. Ethiopia has so far refused international mediation.

The Ahmed-Sissi meeting was described as “taking place in a positive atmosphere,” according to an Egyptian diplomatic source who spoke to AFP but there have been no further details to date. An eventual agreement may be a hopeful outcome but it is also a pragmatic one. All countries must adapt to fluid and developing situations. Egypt appears to have come to terms with the fact that sharing the Nile requires more than lip service; Ethiopia needs to forge ahead with its development. Ethiopia will have to come to terms with the fact that its development cannot come at the cost of the security of 100 million people.