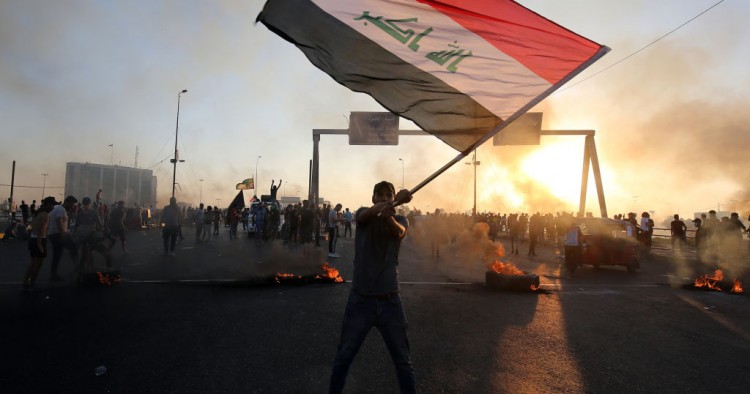 Iraq has been rocked by a wave of protests over the past week that has so far resulted in more than 100 deaths and 6,000 wounded among civilian protesters and security forces. Unidentified snipers have targeted the protesters. Today, the number of protest sites has been reduced partly due to the protesters’ observance of a religious occasion and partly due to the shutdown of the internet, which has limited their ability to coordinate and mobilize supporters. The government, led by Prime Minister Adel Abdul-Mahdi, has issued 17 action items to help address the protesters’ demands. Unlike previous protest waves, this time around the protesters do not seem to be affiliated with political parties or acting at their behest. To the contrary, their demands are focused on bringing down the political parties which have ruled Iraq since the U.S. invasion in 2003.

As before, protesters are demanding jobs, better services, and an end to the corruption that is widespread and institutionalized in Iraq at all levels of government. Protesters have also voiced opposition to Iran’s increasing sway on decision making in Iraq, shouting, “Iraq first, Iran out.” The fact that the great majority of these protesters are Shi’a, many of whom are former soldiers, including some who fought against ISIS, must be of particular concern to Tehran.

Muqtada al-Sadr issued a call for the resignation of the government, echoing a similar demand made by the protesters, and was joined in this demand by former Prime Minister Haider al-Abadi. In his sermon on Friday, Grand Ayatollah Ali al-Sistani placed the blame on the large governing coalitions in parliament, the first of which is led by Muqtada al-Sadr, and the judicial authorities for failing to do their job. He refrained from calling for the resignation of the government, however. For now, both Najaf and Tehran seemed to have a convergence of interests on preserving the post-2003 political order, and see the resignation of the prime minister and his cabinet as ushering in an uncertain and unstable political transition with unforeseen consequences.

The president, prime minister, and speaker of parliament have all called for an investigation of the Iraqi security forces and the disproportionate use of force against unarmed protesters and their attacks on several TV stations. Leaders of the security services claim the violence was not committed by their members. It is doubtful that a credible and transparent investigation will be conducted and perpetrators will be held accountable as a result. Circumstantial evidence points to the likely involvement of Iran-linked Iraqi militias in the violence perpetrated against the protestors and the TV stations. Iran has substantial equities in Iraq and will not stand idly by as they are threatened.

Structural deficits that have been accumulating since 2003 and the vested interests of all the Iraqi political parties and leaders in perpetuating the current political system make the prospect of serious political and economic reforms to meet the protesters’ demands very slim. This means the protest movement will wane and wax over time, becoming stronger, better organized, and better led with every wave. Iraq is likely to face a long period of political instability ahead as the generation of older politicians that fought Saddam Hussein in exile and inside Iraq and feel Iraq owes them the political and economic benefits they have gained since 2003 clashes with the post-2003 generation of youth that feels the political system no longer serves their interests and, more importantly, is immune to reform. It is no surprise that protesters this time have called for the downfall of the regime, borrowing the famous slogan of the 2011 Arab uprisings.