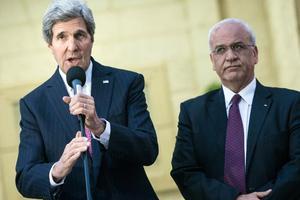 The Middle East Institute's George and Rhonda Salem Family Foundation Lecture Series presents a discussion about the current status of the peace process and the challenges faced by Secretary of State John Kerry as he seeks to forge a historic agreement. The talk will feature three veteran peace process experts - Daniel Levy, Aaron David Miller, and Shibley Telhami - who will analyze the obstacles and opportunities and assess the next steps key actors and international players must take to ensure the success of the negotiations.

Daniel Levy is the director of the Middle East and North Africa Programme at the European Council on Foreign Relations. He is also senior research fellow at the New America Foundation and senior fellow at The Century Foundation. Mr. Levy was a policy adviser in the Israeli Prime Minister's office and head of the Jerusalem Affairs Unit during the Barak government. He was a member of the Israeli delegation to the Taba negotiations with the Palestinians in January 2001, and of the negotiating team for the 'Oslo B' Agreement from May to September 1995, under Prime Minister Rabin. Mr. Levy served as senior policy adviser to former Israeli Minister of Justice, Yossi Beilin. He was the lead Israeli drafter of the Geneva Initiative and directed policy planning and international efforts at the Geneva Campaign Headquarters in Tel Aviv. Daniel has a masters degree from Cambridge University, was chairperson of the World Union of Jewish Students, and has published extensively in a broad range of publications including Ha'aretz, The Jerusalem Post, The Boston Globe, The American Prospect, The International Herald Tribune, and The Washington Monthly.

Aaron David Miller is the vice president for new initiatives and a distinguished scholar at the Woodrow Wilson International Center for Scholars. From 2006-2008 he served as a policy scholar at the Wilson Center, where he wrote his fourth book, The Much Too Promised Land: America's Elusive Search for Arab-Israeli Peace (Bantam, 2008). Miller previously served as president of Seeds of Peace, a nonprofit organization dedicated to empowering young leaders from regions of conflict with the skills required to advance reconciliation and coexistence. He also served at the Department of State, where he helped formulate U.S. policy on the Middle East as an advisor to Republican and Democratic Secretaries of State, most recently as the senior advisor for Arab-Israeli Negotiations. He has received the Department of State's Distinguished, Superior, and Meritorious Honor Awards. His articles have appeared in The New York Times, The Washington Post, The Los Angeles Times, and The International Herald Tribune. He is the author of the forthcoming. The End of Greatness: Why America Can’t Have (and Doesn’t Want) Another Great President (Palgrave Macmillan, 2014).

Shibley Telhami is the Anwar Sadat Professor for Peace and Development at the University of Maryland, College Park, and non-resident senior fellow at the Saban Center at the Brookings Institution. Professor Telhami served as advisor to the US Mission to the UN (1990-91), as advisor to former Congressman Lee Hamilton, senior advisor to President Obama's United States Special Envoy for Middle East Peace (2009-2011) George Mitchell, and as a member of the US delegation to the Trilateral US-Israeli-Palestinian Anti-Incitement Committee, which was mandated by the Wye River Agreements. He has also served as an advisor to the United States Department of State and was a member of the Iraq Study Group's Strategic Environment Working Group. He has contributed to The Washington Post, The New York Times, and the Los Angeles Times and regularly appears on national and international radio and television. He has served on the U.S. Advisory Group on Public Diplomacy for the Arab and Muslim World, which was appointed by the Department of State at the request of Congress, and he co-drafted the report of their findings, Changing Minds, Winning Peace. He has also co-drafted several Council on Foreign Relations reports on US public diplomacy, on the Arab-Israeli peace process, and on Persian Gulf security.