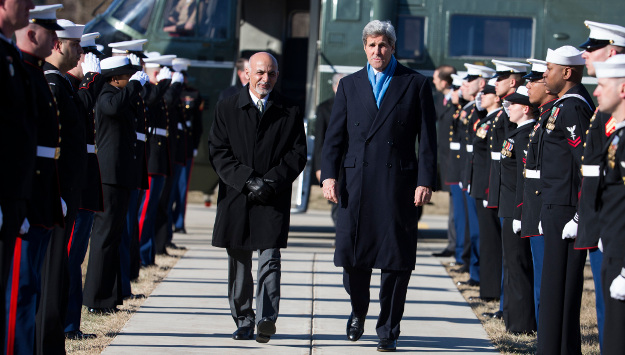 The Middle East Institute's Louis R. Hughes Lecture Series was pleased to host former American Ambassadors to Afghanistan Zalmay Khalilzad (service in Kabul 2003-2005), Ronald Neumann (2005-2007), and Ryan Crocker (2011-2012) for a panel discussion about the ongoing U.S. role in Afghanistan. President Ashraf Ghani has promised a decade of transformation, but to succeed he must face down growing security concerns and political and economic uncertainty. The panelists examined the current situation in the country and the future of the U.S. role there in light of resurgent threats from al-Qa'ida and the Taliban.  Marvin Weinbaum, director of the Center for Pakistan Studies at The Middle East Institute, moderated.

Amb. Zalmay Khalilzad is a counselor at the Center for Strategic and International Studies. From 2007 to 2009, Amb. Khalilzad served as U.S. Permanent Representative to the United Nations. Prior to that, he served as U.S. Ambassador to Iraq (2005-2007) and U.S. ambassador to Afghanistan (2003 to 2005). He also served as U.S. Special Presidential Envoy to Afghanistan (2001 to 2003). Amb. Khalilzad sits on the boards of the National Endowment for Democracy, America Abroad Media, the RAND Corporation’s Middle East Studies Center, the American University of Iraq in Suleymania, and the American University of Afghanistan.

Amb. Ronald E. Neumann is president of the American Academy of Diplomacy.  Formerly a Deputy Assistant Secretary of State, he served three times as a U.S. Ambassador, to Algeria, Bahrain and finally to Afghanistan from July 2005 to April 2007. Before Afghanistan, Mr. Neumann, a career member of the Senior Foreign Service, served in Baghdad from February 2004 with the Coalition Provisional Authority and then as Embassy Baghdad’s principal liaison with the Multinational Command, where he was deeply involved in coordinating the political part of military actions.  Ambassador Neumann is the author of The Other War: Winning and Losing in Afghanistan (Potomac Press, 2009).

Amb. Ryan Crocker is a career ambassador within the U.S. Foreign Service. Ambassador Crocker was in the Foreign Service for 37 years and, after retiring, was recalled to active duty by President Obama in 2011 to serve as U.S. Ambassador to Afghanistan. His previous appointments included service as the U.S. Ambassador to Syria, Iraq, Pakistan, Kuwait and Lebanon. Mr. Crocker became dean of Texas A&M University’s George Bush School of Government and Public Service in 2010.

Marvin Weinbaum (Moderator) is professor emeritus of political science at the University of Illinois at Urbana-Champaign, and served as analyst for Pakistan and Afghanistan in the U.S. Department of State's Bureau of Intelligence and Research from 1999 to 2003. He is currently a scholar-in-residence at the Middle East Institute in Washington DC.