Assessing the Past, Informing the Future: U.S. Aid Policy in Afghanistan & Pakistan 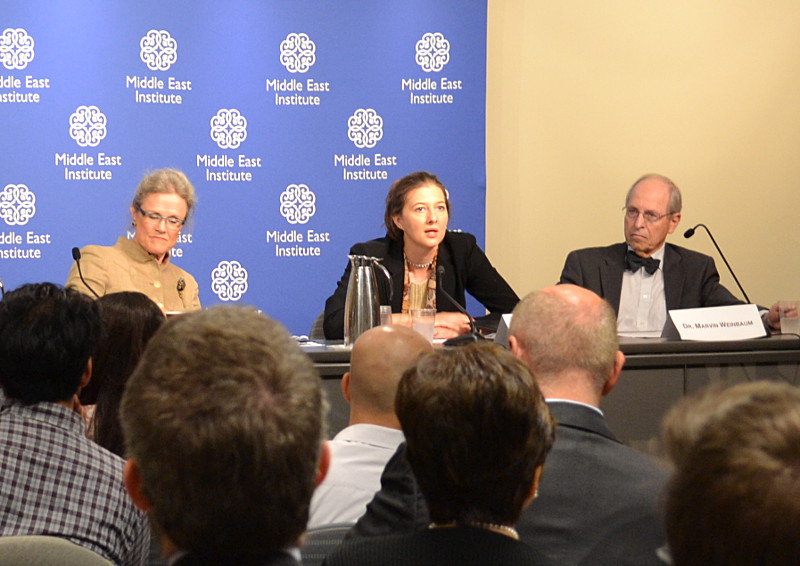 The Middle East Institute is pleased to welcome Vanda Felbab-Brown, senior fellow with the Center for 21st Century Security and Intelligence in the Foreign Policy program at Brookings, independent consultant Polly Nayak,  Amb. Robin Raphel, U.S. Coordinator for Non-Military Assistance to Pakistan, and Alex Thier, assistant to the Administrator for Policy, Planning, and Learning at USAID, for a panel discussion examining how the US can contribute to the stability of post-2014 Afghanistan and Pakistan through economic and development assistance. The panel will identify lessons learned over a dozen years of aid to both countries that can instruct future US policy. Bringing together their collective experience in aid administration, security, and nation building in the region, the panelists will point to forms of assistance that have furthered American objectives, as well as to those that have proven ineffective and even counterproductive. Dr. Marvin Weinbaum of the Middle East Institute will moderate the panel.

Vanda Felbab-Brown is a senior fellow with the Center for 21st Century Security and Intelligence in the Foreign Policy program at Brookings. She is an expert on international and internal conflicts and nontraditional security threats, including insurgency, organized crime, urban violence, and illicit economies. Her fieldwork and research have covered, among others, Afghanistan, South Asia, Burma, Indonesia, the Andean region, Mexico, Morocco, Somalia, and eastern Africa. She is the author of Aspiration and Ambivalence: Strategies and Realities of Counterinsurgency and State-building in Afghanistan (Brookings 2013) and Shooting Up: Counterinsurgency and the War on Drugs (Brookings 2010). She often testifies on these issues in the U.S. Congress and is a frequent commentator in the U.S. and international media.

Independent consultant Polly Nayak is a longtime South Asia expert whose professional experience has included a 20-year government career in intelligence and foreign policy, as well as earlier private-sector international experience, both corporate and non-profit. From 1995 to 2001, she was the intelligence community's most senior expert and manager on South Asia, helping to shape intelligence analysis and crisis support to the White House and Congress during a period of great tension and conflict in the region. As a President's Daily Briefer, Ms. Nayak routinely briefed the Secretary of Defense, Chairman of the Joint Chiefs, and National Security Adviser on worldwide developments. She was a 2001-2002 Federal Executive Fellow at Brookings. Since late 2002, Ms. Nayak has consulted for and provided analysis to government and private sector clients on issues ranging from political stability, development, and business climate, to insurgency and nuclear proliferation, with special emphasis on South Asia. Besides several book chapters, her recent publications include a study on US civilian aid to Pakistan, Aiding Without Abetting, with contributions from the senior working group she directed at the Woodrow Wilson International Center. She co-authored The Unfinished Crisis: US Crisis Management After the 2008 Mumbai Attacks, with Michael Krepon.

Ambassador Robin Raphel is senior adviser for Pakistan to the Special Representative for Afghanistan and Pakistan at the Department of State. From 2009 to 2011, she led the U.S. interagency effort to design and implement dramatically increased U.S. civilian assistance to Pakistan. Amb. Raphel has more than thirty-five years of government experience, primarily with the Department of State. In 1975, she worked as an economic and financial analyst in the USAID mission in Islamabad, before becoming the first Assistant Secretary of State for South Asian Affairs. She has held positions in US Embassies in Islamabad, London and South Africa, and served as Ambassador to the Republic of Tunisia in the late 1990s. She traveled frequently to Pakistan and Afghanistan in the mid-1990s, where she witnessed the rise of the Taliban and the prelude to the events which were to tragically unfold nearly a decade later at the World Trade Center. In early 2003, she was deployed to Iraq with the first wave of civilians, serving as the senior advisor to the Ministry of Trade. She later became Deputy Special Inspector General for Iraq Reconstruction.

J. Alex Thier currently serves as an assistant to the administrator for USAID's Bureau of Policy, Planning and Learning. Previously, he served as the assistant administrator for USAID's Office of Afghanistan and Pakistan Affairs (OAPA). Prior to joining USAID, Thier was director of Afghanistan and Pakistan at the U.S. Institute of Peace (USIP), where he co-authored The Future of Afghanistan (USIP, 2009) and The Next Chapter: The United States and Pakistan (USIP, 2008). At USIP, he also served as senior adviser to the Rule of Law Center for Innovation, where he focused on building USIP's rule of law program in Afghanistan, and as a principal staffer on the Genocide Prevention Task Force. Previously, Thier was director of the Project on Failed States at Stanford University's Center on Democracy, Development, and the Rule of Law. He also served as legal adviser to Afghanistan's Constitutional and Judicial Reform Commissions in Kabul, where he assisted in the development of a new constitution and judicial system. From 1993 to 1996, Thier worked as a U.N. and NGO official in Afghanistan and Pakistan during the country's civil war.

Dr. Marvin Weinbaum is professor emeritus of political science at the University of Illinois at Urbana-Champaign, and served as analyst for Pakistan and Afghanistan in the U.S. Department of State's Bureau of Intelligence and Research from 1999 to 2003. He is currently a scholar-in-residence at the Middle East Institute in Washington DC. At Illinois, Dr. Weinbaum served for fifteen years as the director of the Program in South Asian and Middle Eastern Studies. His research, teaching, and consultancies have focused on the issues of national security, state building, democratization, and political economy in Afghanistan and Pakistan. He is the author or editor of six books and has written more than 100 journal articles and book chapters. Dr. Weinbaum was awarded Fulbright Research Fellowships for Egypt in 1981-82 and Afghanistan in 1989-90, and was a senior fellow at the United States Institute of Peace in 1996-97. He has been the recipient of research awards from the Social Science Research Council, the Ford Foundation, the American Political Science Association, and other granting agencies.

***Please note this event is not being held at MEI.***