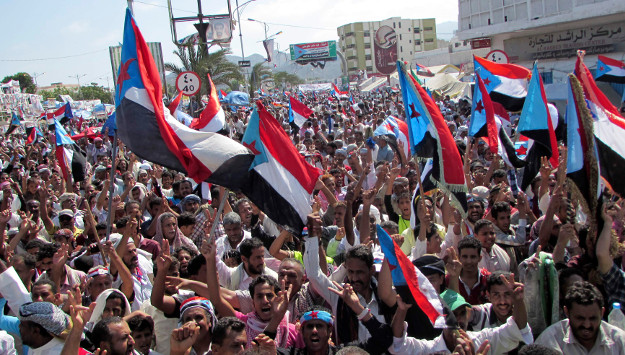 Civil wars in Syria, Libya, Yemen, and Iraq have killed hundreds of thousands, displaced millions, enabled the resurgence of terrorist organizations, and threaten the stability of neighboring countries as well as Europe. These conflicts erupted in the wake of domestic demands for change in the face of repressive governments and in the context of bitter proxy struggles between regional powers. Bringing these civil wars to a sustainable and inclusive end is key to denying space to terrorist groups, repatriating IDPs and refugees, and starting the process of post-war reconstruction.

The Middle East Institute (MEI) hosted Kathleen Cunningham (Univ. of Maryland), Marc Lynch (George Washington Univ.), and Kenneth M. Pollack (Brookings Institution) for an analysis of the causes and trajectories of the Middle East's civil wars and policy implications for the United States. Lynch presented the thesis of his recent book The New Arab Wars and Pollock drew on his co-authored article "Escaping the Civil War Trap in the Middle East." MEI Scholar Ross Harrison moderated the discussion.

Featuring:
Kathleen Gallagher Cunningham
Associate Professor, University of Maryland
Kathleen Gallagher Cunningham is an associate professor at the Department of Government and Politics at the University of Maryland. Her primary research interests include self-determination, secession, civil war, leadership in rebellion, and non-violent resistance. She received her Ph.D. from the University of California, San Diego in 2007 and has been a Fulbright Scholar and a senior researcher at the Peace Research Institute Oslo.  Her work has been published by Oxford University Press, American Political Science Review, American Journal of Political Science, Journal of Peace Research, Journal of Conflict Research, International Studies Quarterly and Perspective on Politics.

Marc Lynch
Professor of Political Science, George Washington University
Dr. Lynch teaches courses on Middle Eastern politics and international relations at the Elliott School of International Affairs. He is the director of the Project on Middle East Political Science, a contributing editor for The Washington Post's Monkey Cage political science page, editor of the Columbia University Press series Columbia Studies on Middle East Politics, and a nonresident senior associate at the Carnegie Endowment for International Peace.
Kenneth M. Pollack
Senior Fellow, Brookings Institution
Kenneth M. Pollack is an expert on Middle Eastern political-military affairs, with particular emphasis on Iraq, Iran, Saudi Arabia, and the other nations of the Persian Gulf region. He is a senior fellow in the Center for Middle East Policy at the Brookings Institution. He served as the director of the Center from 2009 to 2012, and its director of research from 2002 to 2009. Pollack began his career as an Iran-Iraq military analyst at the Central Intelligence Agency, where he served from 1988 until 1995. During that time, he was the principal author of the CIA’s classified post-mortem on Iraqi strategy and military operations during the Persian Gulf War of 1990-1991. Pollack received the CIA’s Certificate of Distinction for Outstanding Performance of Duty for work before and during the Persian Gulf War. He also twice received the CIA’s Exceptional Performance Award, also for work related to the war.
Ross Harrison, Moderator
MEI Scholar
Ross Harrison is a scholar at The Middle East Institute and is on the faculty of the School of Foreign Service at Georgetown University. From 2007-2013, he was professor in the practice of international affairs at Georgetown, serving as chair of the international commerce and business concentration in the Master of Science in Foreign Service (MSFS) program. Ross is also on the faculty of the political science department at the University of Pittsburgh, teaching courses in Middle East politics. He annually teaches a course on strategy and international security to senior Georgian government officials at the Georgian Foundation for Strategic and International Studies in Tbilisi, Georgia, funded by the U.S. Department of State. Harrison authored Strategic Thinking in 3D: A Guide for National Security, Foreign Policy and Business Professionals (Potomac Books, 2013), which currently is a required strategy text at the U.S. National War College. Related to the book's release, he lectured at the U.S. Department of State, the National War College and National Defense University, Georgetown University, and the Matthew B. Ridgway Center for International Security Studies.