A Conversation with Mouaz Al-Khatib, Founding President of the Syrian National Coalition 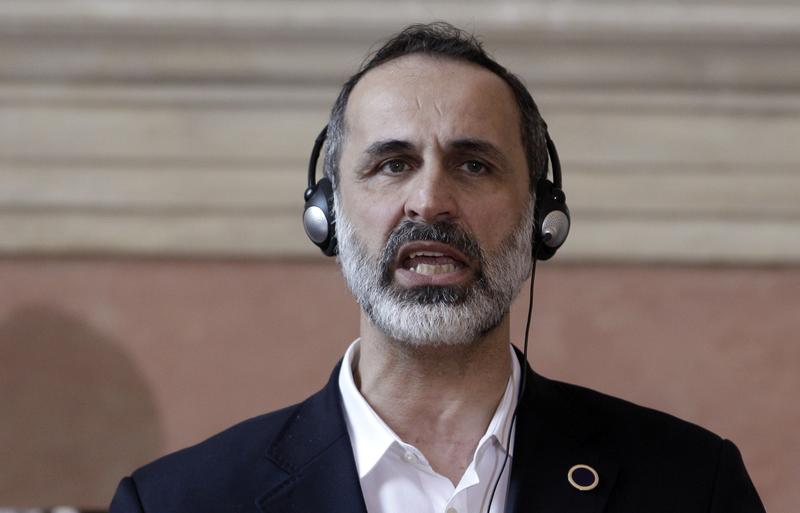 (Washington D.C.) – “The Syrian regime in its current form will continue to be a source of instability and conflict for the Syrian people,” says Sheikh Mouaz Al-Khatib, the founding president of the Syrian National Coalition, “and the region will see no stability while it remains in power.”

Khatib, a former Imam at the Umayyad Mosque in Damascus, shared his insights on the dynamics of Syria’s four-year-old conflict at an event co-hosted by The Middle East Institute (MEI) and the Center for the Study of Islam and Democracy on March 19, 2015. In a public presentation followed by a conversation with MEI Senior Fellow Robert Ford, Khatib set out his vision for the country’s path to political reconciliation.

There is a deepening crisis in Syrian society, he explained, driven by the Assad regime’s brutality, intervention by foreign fighters, and an insufficient and uncoordinated approach by the international coalition to support moderate opposition forces.

And while he argues that a negotiated political resolution is necessary, he says there is no conceivable role left for Assad to remain in power.  “Concluding any deals with the regime would cause a humanitarian catastrophe, and would cause extremism to spread exponentially.”

Robert Ford, the former U.S. ambassador to Syria, asked what the international coalition should do to help address the long term issue of recruitment of young Syrians by extremist groups.  Khatib replied that in the “early stages of the revolution, we had no extremism and no foreign fighters, but under the conditions created by the regime, Syrians were faced with the choice of either extremism or suffering the brutality of the regime.”

Now these foreign extremist groups and fighters associated with al-Qa’ida pose a significant threat to Syrian unification, he says. “The ideology of al-Qa’ida is destroying Islam throughout the world, and we would never accept that because it damages our understanding of Islam.”

However, Khatib argued that many Syrians who had been lured to such groups are not deeply radical and have in recent months shown a willingness to rethink their relationship with al-Qa’ida and “to rejoin the Syrian people.”  He warned the international coalition against being too quick to brand rebels as terrorists. “The list of groups as terrorist organizations may not be totally accurate,” he said, “because some regional powers, because of their own interests, are trying to squeeze names onto these lists…It antagonizes some who are not enemies in the first place.”

Mouaz Al-Khatib was founding president of the Syrian National Coalition (SNC) and a renowned former imam of the Umayyad Mosque in Damascus until the Assad regime banned him from preaching. As president of the SNC, Sheikh Khatib made active efforts to preserve the pluralistic character of the Syrian revolution by protecting Syria's Christian minority and developing a moderate Islamic legal code designed to blunt the strength of religious fundamentalists in Syria.

Khatib was arrested several times for his protest activities before fleeing Syria in June 2012. He was elected president of the SNC five months later, but resigned from the post in April 2013, citing regional attempts to co-opt opposition decision-making and lack of Western military support to the Free Syrian Army.

Mohammed Alaa Ghanem (Interpreter) is the senior political adviser, government relations director, and strategist for the Syrian American Council in Washington DC. He previously served as a professor at the University of Damascus, and has been involved in the Syrian revolution since its early days as a peaceful protest movement. His work connects U.S. policy-makers and the Syrian-American community with the revolution inside Syria. Utilizing his extensive network of contacts at all levels of the Syrian opposition, he frequently travels to the liberated parts of Syria, participates in international conferences on Syria, and advises local administrative councils in liberated areas across Syria on international relations. In early 2013, he participated in monitoring the elections of the first democratically elected government in Aleppo. Ghanem is also a fellow with the Syrian Center for Political and Strategic Studies and a board member of the Coalition for a Democratic Syria. At SCPSS, he has been in involved in SCPSS’ Syria Transition Roadmap, an ambitious post-Assad transition project. He holds a master’s degree in peacebuilding and conflict transformation.

Robert Ford (Moderator) is senior fellow at The Middle East Institute and concurrently teaches at Johns Hopkins University. He recently concluded a 30-year career with the U.S. Foreign Service after serving as Ambassador to Syria from 2010 to 2014, and previously as Ambassador to Algeria. Shortly after the outbreak of Syria's civil war, Ford traveled to the city of Hama in a show of solidarity with Syrians protesting the misrule of Bashar Al Assad. He subsequently worked closely with Syrian opposition forces and was instrumental in bringing them to the Geneva peace talks. Ambassador Ford was awarded the Presidential Honor Award for his leadership of the American Embassy in Damascus, and received the Secretary of State’s Distinguished Service Award, the State Department's highest honor, for his work on Syria. He is fluent in Arabic and French.