Egypt's Economy: Addressing the Challenges Ahead 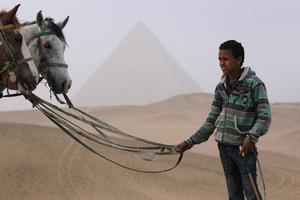 Three years after Egypt's January 25 revolution, triggered in part by a demand for greater economic opportunity, Egypt's economy remains fragile, with slowing GDP growth, declining foreign investment, and youth unemployment at levels that threaten ongoing social unrest. With presidential elections expected this spring, The Middle East Institute will host a discussion about the economic challenges and opportunities faced by Egypt's future leadership and what more the international community can do to help encourage growth. The discussion will feature Shantayanan Devarajan, Chief Economist of the Middle East and North Africa Region at the World Bank, Ahmed Ghoneim, professor of economics at Cairo University, Zubair Iqbal, adjunct scholar at the Middle East Institute, and Steve Lutes, director of Middle East Affairs at the U.S. Chamber of Commerce. MEI vice president for policy and research Paul Salem will moderate the event.

Shantayanan Devarajan is the chief economist of the World Bank's Middle East and North Africa Region. Since joining the World Bank in 1991, he has been a principal economist and research manager for public economics in the Development Research Group, and the chief economist of the Human Development Network, the South Asia Region, and Africa Region. He was the director of the World Development Report 2004, Making Services Work for Poor People. Before 1991, he was on the faculty of Harvard University's John F. Kennedy School of Government. The author or co-author of over 100 publications, Mr. Devarajan's research covers public economics, trade policy, natural resources and the environment, and general equilibrium modeling of developing countries. Born in Sri Lanka, Mr. Devarajan received his B.A. in mathematics from Princeton University and his Ph.D. in economics from the University of California, Berkeley.

Ahmed Farouk Ghoneim is currently a professor of economics in the faculty of economics and political science at Cairo University. He is a research fellow at the Economic Research Forum for Arab Countries (ERF) in Egypt, where his research focuses on Iran and Turkey, and is also a research fellow at the Center for Social and Economic Research (CASE) in Poland. He works as a consultant to several international and national organizations including the World Bank, World Trade Organization, United Nations Conference on Trade and Development, United Nations Development Programme, United Nations World Food Programme, and the World International Properties Organization. He holds a Ph.D. in economics and his special interests in research include mainly trade policy, trade in services, regional trade integration, the multilateral trading system, the World Trade Organization, competition, and the economics of Intellectual Property Rights, in which he has published widely. He has held different policy oriented positions, among them an advisor on foreign trade issues to the Minister of Foreign Trade and advisor to the Minister of Industry on foreign trade issues and international agreements.

Zubair Iqbal joined The Middle East Institute as adjunct scholar in 2008. Prior to joining MEI, he worked with the International Monetary Fund (IMF) for thirty five years, retiring in 2007 as assistant director of the Middle East and Central Asia Department. Before joining the IMF, Iqbal worked as senior research fellow in the department of economics at Islamabad University in Pakistan. At the IMF, Iqbal held multiple postings ranging from those for the development of macroeconomic and exchange and trade policies for adjustment and growth in member countries, strategies for IMF-member country relations, design of adjustment programs for the balance of payments, and assistance and technical support. During this period, Iqbal participated in missions to 54 countries in Africa, Asia, the Middle East, Europe, and Latin America. He also served as senior advisor to the Saudi Arabian Executive Director to the IMF. He has written or edited 5 books and over forty articles in IMF and external research publications.

Steve Lutes is director of Middle East Affairs at the U.S. Chamber of Commerce. He serves as the executive director of the U.S.-Egypt Business Council as well as director of the U.S.-Iraq Business Initiative. In this capacity, Lutes is responsible for developing and implementing policies and programs that promote U.S. business opportunities and investment in both Egypt and Iraq. Lutes is also responsible for managing the Chamber’s growing work in the Gulf countries. Lutes came to the Chamber from the U.S. Department of Commerce’s International Trade Administration (ITA) where he was a senior legislative affairs specialist in the Office of Legislative and Intergovernmental Affairs. Lutes also served as the congressional liaison to the President’s Export Council and the Manufacturing Council for the Department. Earlier in his career, he worked on Capitol Hill. Lutes earned his bachelor’s degree from Indiana University’s Kelley School of Business, and is currently pursuing a Masters in Public and International Affairs from Virginia Tech.

Paul Salem is vice president for policy and research of the Middle East Institute, where he leads an initiative on Arab transitions. Prior to joining MEI, Salem was the founding director of the Carnegie Middle East Center in Beirut, Lebanon between 2006 and 2013, where he built a regional think tank distinguished by the quality of its policy research and high regional profile. From 1999 to 2006, he was director of the Fares Foundation and in 1989 founded and directed the Lebanese Center for Policy Studies, Lebanon's leading public policy think tank.  In 2002, Salem served on the senior review committee for the United Nations Development Program's Arab Human Development Report. Salem writes regularly in the Arab and Western press and has been published in numerous journals and newspapers, including The New York Times, Foreign Affairs, the National Interest, and the Financial Times. Salem is the author of a number of books and reports on the Middle East, including Broken Orders: The Causes and Consequences of the Arab Uprisings (in Arabic, 2013); "Iraq's Tangled Foreign Relations" (2013), "Libya's Troubled Transition" (2012), "Can Lebanon Survive the Syrian Crisis?" (2012); and "The Arab State: Assisting or Obstructing Development" (2010).