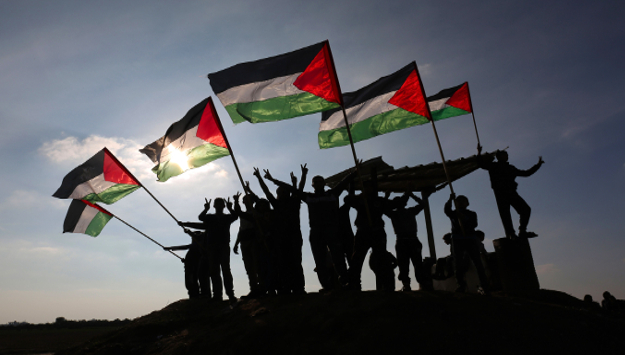 Relations between the U.S. and the Palestinians are in free-fall. The Trump administration’s decisions to recognize Jerusalem as Israel’s capital and then cut funding to UNRWA to force the Palestinians back to the negotiating table have been met with mass protests and official recriminations. Meanwhile, peace has never seemed more distant, with a recent poll showing support for a two-state solution at a historic low among both Israelis and Palestinians.

What are the prospects today for advancing Palestinian self-determination? At a time when Palestinian options seem limited, what new and creative roles are the Palestinian grassroots, civil society and leadership playing in supporting a resolution to the conflict and an end to the occupation?

The Middle East Institute, Foundation for Middle East Peace and the OneVoice Movement are pleased to host a panel of distinguished experts to discuss those questions and more, featuring Maya Berry (Arab American Institute), Khaled Elgindy (Brookings), and Abdallah Hamarsheh (ZimamPalestine). OneVoice’s regional director in the Mid-Atlantic, Obada Shtaya, will moderate the discussion.

A light lunch will be served.

Khaled Elgindy
Fellow, Center for Middle East Policy, The Brookings Institution
founding board member, Egyptian American Rule of Law Association
Khaled Elgindy is a fellow in the Center for Middle East Policy at Brookings and a founding board member of the Egyptian American Rule of Law Association. He previously served as an advisor to the Palestinian leadership in Ramallah on permanent status negotiations with Israel from 2004 to 2009, and was a key participant in the Annapolis negotiations held throughout 2008. He is a co-author of "The Arab Awakening: America and the Transformation of the Middle East" (Brookings Institution Press, 2011).

Abdallah Hamarsheh
Deputy director and co-founder, Zimam
Abdallah Hamarsheh is the Deputy Director and co-founder of Zimam, a Palestinian civil society organization working to enable and empower youth to take a leadership role in creating a pluralistic and democratic Palestinian State. Abdallah worked for the Ministry of NGO Affairs before he joined the OneVoice Movement in 2005 as a volunteer, soon became an activist, and started studying organizing and conflict resolution. His responsibilities include the design and implementation of the movement’s training sessions of more than 1,500 active youth leaders in the West Bank and Gaza. Abdallah’s leadership skills and commitment have been widely noted, including in the book Invisible Giants by Leaders’ Quest founder Lindsay Levin.

Obada Shtaya
Regional director, OneVoice Movement Mid-Atlantic region
Obada Shtaya is the Regional Director of the OneVoice Movement for the Mid-Atlantic region. Between 2015 and 2017 he was a Fulbright scholar at George Mason’s school for conflict analysis and resolution. Obada was one of the founders of the OneVoice on Campus fellowship program, which provides American students with an opportunity to engage in constructive activism, especially surrounding the Palestinian-Israeli conflict. Before coming to the US in 2015, Obada lived and worked in Palestine.