Landmines, IEDs, and other Explosive Hazards in the Middle East: Addressing a Growing Threat 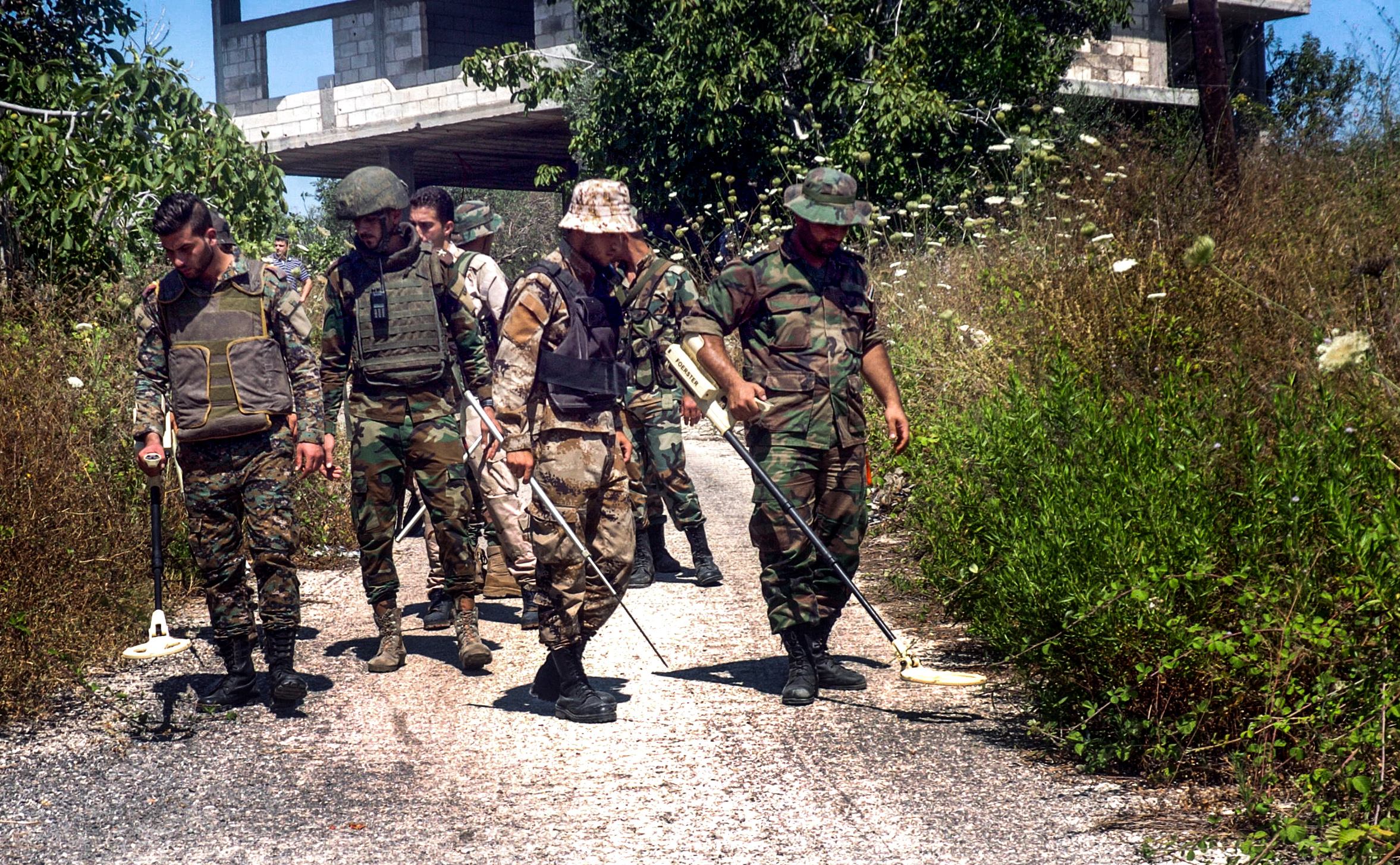 The Middle East Institute (MEI) is pleased to announce a conference on the growing threat of landmines, IEDs, and other explosives in the Middle East. This conference will be the first in Washington, DC focused exclusively on explosive hazard removal efforts in the region, and will feature three panels examining the human impact of explosives across the region, emerging technologies in the field of demining, and potential policy responses and priorities.

9:00am | Opening Remarks and Introduction Keynote

HRH Prince Mired bin Ra'ad al-Hussein
Chairman, National Committee for Demining and Rehabilitation, Jordan
Special envoy to Ottawa Convention, Jordan
HRH Prince Mired bin Ra'ad al-Hussein is the visiting special envoy of the Anti-personnel Mine Ban Convention. He has also served as the chair of Jordan’s National Committee for Demining and Rehabilitation since 2004. After being appointed in 2009 as the special envoy to the Anti-personnel Mine Ban Convention, he has worked extensively with the United Nations and member countries to promote the banning of anti- personnel mines, worldwide. In addition, since 2000 he has served as president of the Hashemite Charitable Society for Soldiers with Special Needs and he is vice president of the Higher Council for Persons with Disabilities. Prince Mired has extensive military experience. He completed the Graduate Officers Course in Military Studies and Officer Training at the British Royal Military Academy, Sandhurst in 1990. This was preceded by two years military conscription to the Jordanian Armed Forces (1987–1989) and followed by further service to the Jordanian Armed Forces as Special Forces Officer (1990-1991); and Military Intelligence Officer (1991-1994). From 1995 to 1997 he served as Security and Intelligence Officer with Jordanian Security (1995–1997).

Jane Cocking
CEO, Mines Advisory Group (MAG)
Jane Cocking joined MAG as chief executive in January 2017. Cocking more than 25 years’ experience in the humanitarian sector and has led response to multiple crises across the world, from Somalia to Syria. She has also been involved in many strategic initiatives to improve the quality of humanitarian response. Jane worked for the ODA (the Department for International Development’s predecessor) and Save the Children before spending almost 20 years with Oxfam GB, eight as Humanitarian Director.

Major General James Cowan
CEO, HALO Trust
James Cowan is CEO of The HALO Trust. At a time of unprecedented man‐made humanitarian crisis, HALO’s work has never been more important. Cowan was a soldier for 30 years, serving in Germany, Northern Ireland, Africa, Hong Kong, Iraq and Afghanistan. He commanded his Regiment, The Black Watch, in Iraq in 2004 during fighting in Basra and subsequently around Fallujah. He took command of Task Force Helmand and served in Afghanistan during 2009‐10. His tour coincided with the appointment of General Stanley McChrystal as commander of ISAF and Operation Moshtarak, the clearance of the Taliban from central Helmand. Cowan was subsequently Head of Counter Terrorism in the British Ministry of Defense and led the planning for the 2012 Olympics military security operation. His last job in the British Army was as General Officer Commanding the 3rd (UK) Division – the UK’s warfighting formation of three mechanized brigades, artillery, engineers and logistics. Cowan left the Army in 2015 to become Chief Executive of The HALO Trust.

Kimberly Dozier
Global affairs analyst, CNN
Kimberly Dozier is a CNN Global Affairs Analyst and a regular contributor to The Daily Beast. She covered intelligence and national security for The Associated Press and then The Daily Beast from 2010 to 2017, after 17 years as an award-winning CBS News foreign and national security correspondent. She held the 2015 Gen. Her best-selling memoir, Breathing the Fire: Fighting to Survive and Get Back to the Fight, recounts losing her CBS News team and recovering from a car bomb in Iraq.

Massoud Hassani
Founder, Mine Kafon Labs
Massoud Hassani grew up on the edge of Kabul. Living next to an active minefield, he experienced the horrors of land-mines from an early age. Inspired by humanitarian beliefs, nature, and the wind-powered toys he grew up making, the “Mine Kafon,”a wind-powered art piece and landmine clearing device, in 2011. The Mine Kafon Lab as developed the “MKD” project, an innovative system developed to aid in mine clearance.

Ninette Kelley
Director, New York office, UNHCR
Ninette Kelley has been the director of UNHCR’s office in New York since August 2015. She joined UNHCR in 2002 and has served in several senior management positions, both at headquarters and in the field.  Prior to her assignment in New York, Kelley served five years as UNHCR’s representative in Lebanon, leading one of UNHCR’s most complex refugee operations. Before joining UNHCR, Kelley served for eight years with the Immigration and Refugee Board of Canada as a member of the Convention Refugee Determination Division and of the Immigration Appeal Division from June 1994 to June 2002.  Previously she held various policy and consultative roles with international humanitarian agencies focusing on development and refugee issues. Kelley is the author of The Making of the Mosaic: The History of Canadian Immigration Policy, University of Toronto Press, 2nd edition, October 2010 (with Michael Trebilcock) and has published in the areas of human rights law, citizenship, refugee protection, gender related persecution and the Canadian Charter of Rights and Freedom.

Gordon Lubold
Pentagon reporter, Wall Street Journal
Gordon Lubold has covered the military and national security for more than 15 years, and is now the Pentagon reporter for The Wall Street Journal. Prior to joining The Journal, he launched and authored three different national security newsletters for three outlets, including “Situation Report,” emailed to and read by 150,000 readers each morning. He served as a senior advisor at the United States Institute of Peace, and was national security correspondent for The Christian Science Monitor. He has covered conflict in Iraq, Afghanistan, Pakistan and across the Middle East and Central Asia, and has reported on military matters in sub-Saharan Africa and Latin America and East Asia.

Dion Nissenbaum
National security reporter, Wall Street Journal
Dion Nissenbaum is a reporter on the Wall Street Journal national security team in Washington. Before joining the Washington bureau last year, Nissenbaum was based in Jerusalem, Kabul and Istanbul. He was part of the Journal team that was a 2017 Pulitzer Prize finalist for international reporting for its coverage of Turkey after the 2016 failed coup. He was detained by Turkish authorities over a tweet in December, 2016 and forced to leave the country. He is author of A Street Divided: Stories from Jerusalem's Alley of God.

Steve Priestley
Director of Mine Action, Janus Global Operations
Steve Priestley is Janus’s Global Operations director of Mine Action, responsible for the development and growth of our humanitarian and commercial mine action activities globally and has worked for the company since 2011. Priestley has over 25 years’ experience outside the military in design, management implementation and oversight of demining, Explosive Ordnance Disposal (EOD), survey, battle area clearance, small arms light weapon remediation and physical security and stockpile management (PSSM) programs in more than thirty countries. During this time he contributed to the development of innovative sectoral approaches such as Community Liaison in support of task identification and prioritization, deployment of multi-skilled Mine Action teams and the use of demining resources to perform micro-disarmament and PSSM activities in remote locations. More recently, Priestley helped establish Janus’s IED clearance project in Ramadi working in close collaboration with the U.S. Embassy, coalition personnel, the United Nations and national and regional Iraqi Government officials. After serving as a Troop Commander in an EOD Squadron of the British Army, Priestley spent a year in Kuwait initially clearing mines and unexploded ordnance to enable access for oil well firefighting teams and subsequently working on the barrier minefields in the south of the country.

Kenneth Rutherford
Director, CISR, James Madison University
Kenneth Rutherford is director of the Center for International Stabilization and Recovery and professor of Political Science at James Madison University.  He was a Fulbright Scholar in Jordan, Peace Corps volunteer in Mauritania, contracted by UNHCR to assist in refugee camps on the Mauritania-Senegal border and was a humanitarian aid worker in Kenya and Somalia, where he was injured by a landmine. He has published more than 40 landmine articles in numerous academic and policy journals and published books on landmines, including and Disarming States: The Global Movement to Ban Landmines and Landmines and Human Security. His next book, America’s Buried History: Landmines in the Civil War, will be published in January 2019. As an advocate for people with disabilities affected by landmines, he has presented in more than 35 countries, testified before the U.S. Congress and presented at the U.N. (New York City and Geneva). He has also appeared on television, including Dateline, Nightline, The View, NPR's Morning Edition and All Things Considered and Oprah. In June 2013, he was included among the "one hundred most influential people in armed violence reduction" by the London-based organization Action on Armed Violence.

Paul Shinkman
National security senior writer, US News & World Report
Paul D. Shinkman is the national security correspondent at U.S. News and World Report where he covers the military, war and foreign affairs. He has embedded with American and foreign military forces in Afghanistan and the conflict zone in Ukraine, and has reported from Iraq and Guantanamo Bay, as well as countries in Southeast Asia and along the Russian border. He has interviewed and traveled with some of the Defense Department's top officials.

Mark Swayne
Acting deputy assistant secretary for Stability and Humanitarian Affairs, U.S. Department of Defense
Mark Swayne is the acting deputy assistant secretary for Stability and Humanitarian Affairs (SHA) within ASD for Special Operations/Low – Intensity Conflict in the Office of the Under Secretary of Defense (OUSD) for Policy. SHA develops defense policy for embassy security, humanitarian assistance, disaster response, peacekeeping, stability operations, international rule of law, prevention of atrocities, human rights, lethal autonomous weapons systems, and women, peace and security. He previously served as the director for North-West-Central Africa and Horn of Africa regional director in OUSD Policy. He retired from the U.S. Navy in 2008, and has been working defense policy issues since January 2002. Previous to working at OSD Policy, Swayne was with the State Department and was Interagency Liaison officer for the US-Africa Command’s Pentagon Office.

H.E. Ambassador Fareed Yasseen
Ambassador of Iraq to the United States
H.E. Ambassador Fareed Yasseen is Iraq’s ambassador to the United States of America. He previously served as the Iraqi ambassador to France for six-and-a-half years, from May 2010 until he stepped down in October 2016. Prior to the end of his tenure in Paris, the experienced diplomat was awarded the Republican Medal of Honor—an award rarely given to outgoing ambassadors—by Mr. Christian Masset, secretary general of France’s Ministry of Foreign Affairs, on behalf of the French Presidency. Before serving as Iraq’s representative in France, Ambassador Yasseen held a number of posts within the Government of Iraq, including as the head of policy planning of the Ministry of Foreign Affairs and diplomatic adviser to former Deputy President Mr. Adil Abd al-Mahdi. He has also worked and consulted for numerous United Nations agencies and leading think tanks.

WITH GENEROUS SUPPORT FROM