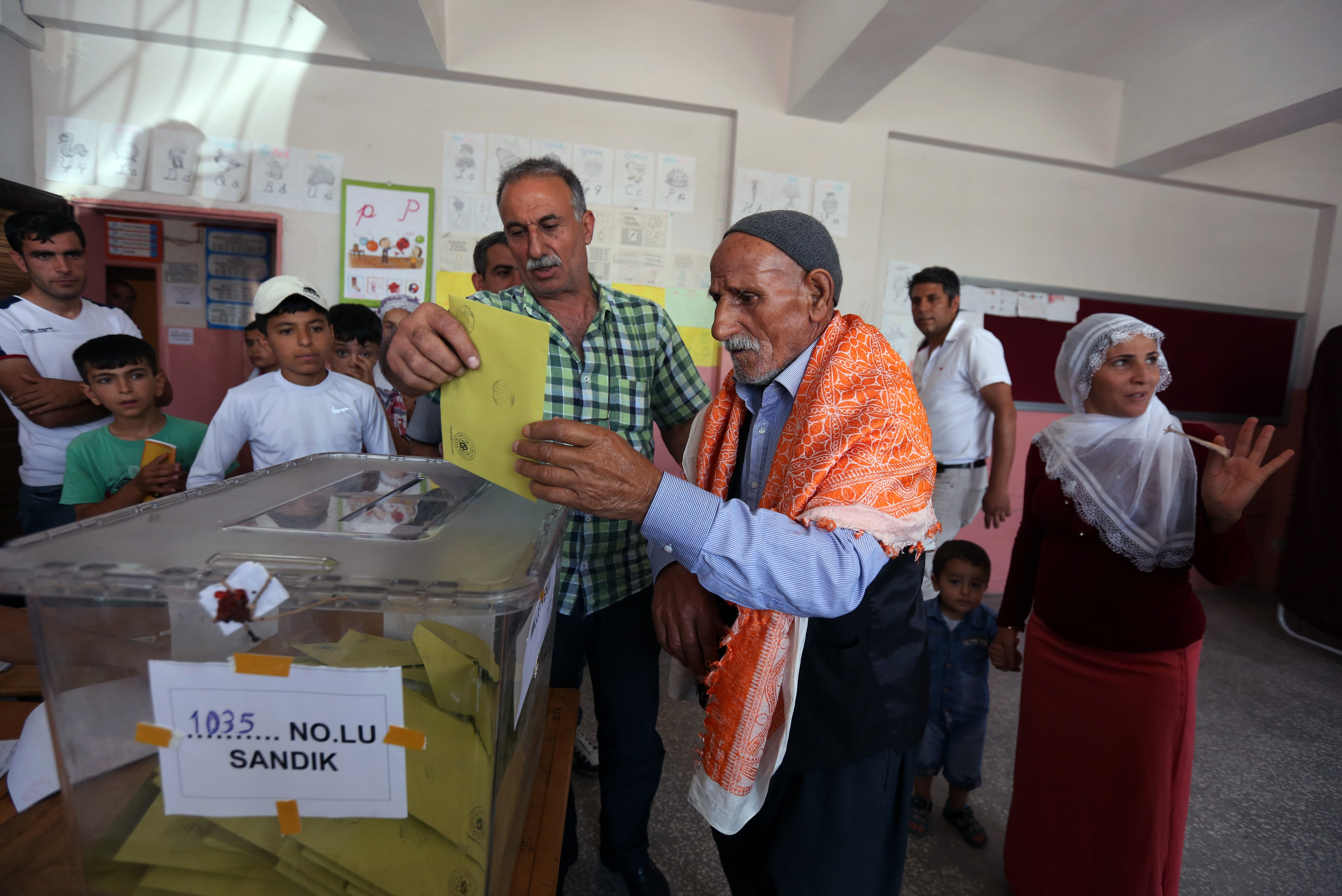 The Middle East Institute (MEI) and the Arab American Institute (AAI) were pleased to host James Zogby (AAI and Zogby Research Services) for the presentation of fresh polling results from across six Arab countries, Iran, and Turkey. With the public release of the report Middle East 2015: Current and Future Challenges, Dr. Zogby analyzed opinions about the armed conflicts in the region, Palestine, the proposed Joint Arab Force, the P5+1 agreement with Iran, and religious extremism. Commentators Jessica Ashooh and Barbara Slavin (both Atlantic Council) and Hassan Mneimneh (MEI) provides their analyses of the poll's findings in a discussion with Dr. Zogby moderated by Paul Salem (MEI).
The poll and resulting report were commissioned by the Sir Bani Yas Forum, convened in the United Arab Emirates by the U.A.E. Foreign Ministry and the Center for Strategic and International Studies. The findings are available on the website of Zogby Research Services; print copies of the report were distributed at the event.
Biographies
James Zogby
Founder and President, Arab American Institute
James J. Zogby is the founder and president of the Arab American Institute (AAI), a Washington, D.C.-based organization which serves as the political and policy research arm of the Arab American community. He is also managing director of Zogby Research Services, which specializes in groundbreaking public opinion polling across the Arab world. Zogby is a lecturer and scholar in Middle Eastern affairs and a visiting professor of Social Research and Public Polling at New York University in Abu Dhabi. A lecturer and scholar on Middle East issues, U.S.-Arab relations, and the history of the Arab American community, Zogby appears frequently on television and radio. Zogby is the author of Arab Voices (Palgrave Macmillan, October 2010), among other books and publications. Zogby has testified before U.S. House and Senate committees and has addressed the United Nations and other international forums. He is a member of the Council on Foreign Relations.
Jessica Ashooh
Deputy Director, Middle East Strategy Task Force, Atlantic Council
Jessica Ashooh is the deputy director of the Middle East Strategy Task Force at the Atlantic Council where she focuses on how US foreign policy can more comprehensively address the growing challenges of state failure and violent extremism in the Middle East. Prior to joining the Atlantic Council, Ashooh worked as a senior analyst in the UAE Foreign Ministry's Policy Planning Department, specializing on the crisis in Syria. Ashooh has also worked as a consulting adviser to the Kurdistan Regional Government's Ministry of Planning in Erbil, Iraq. She holds a doctorate and a master's degree, both in international relations, from the University of Oxford (St. Antony's College), which she attended as a Marshall Scholar. Her doctoral research focused on ideological and bureaucratic infighting in US foreign policy toward the Middle East.
Hassan Mneimneh
Scholar, Middle East Institute
Hassan Mneimneh is a scholar with the Middle East Institute, specializing in the Middle East and North Africa and the wider Islamic world with a particular emphasis on radicalism and factionalism. In previous capacities, he has focused on the significance of socio-political and cultural developments in the MENA region to U.S. and European policies; assessed civil reaction to radicalizing tendencies in Muslim societies; and studied the evolution, record, and prospects of radical Islamist formations worldwide. He has written on political, cultural, historical, and intellectual questions concerning the Arab and Muslim worlds. He is a regular contributor to the pan-Arab newspaper al-Hayat, and is currently affiliated with Middle East Alternatives and Fikra Forum. His previous affiliations include the German Marshall Fund of the United States, Hudson Institute, the American Enterprise Institute, and the Iraq Memory Foundation.
Barbara Slavin
Nonresident Fellow, South Asia Center, Atlantic Council
Barbara Slavin is a nonresident senior fellow at the Atlantic Council's South Asia Center and Washington Correspondent for Al-Monitor.com, a website devoted to news from and about the Middle East. A career journalist, Slavin previously served as Assistant Managing Editor for world and national security of the Washington Times, senior diplomatic reporter for USA TODAY, Cairo correspondent for the Economist, and as an editor at the New York Times Week in Review. She is a regular commentator on US foreign policy and Iran on NPR, PBS, and C-SPAN, covering key foreign policy issues such as the US-led war on terrorism, policy toward "rogue" states, the Iran-Iraq war, and the Arab-Israeli conflict. Slavin also served as a public policy scholar at the Woodrow Wilson International Center for Scholars, where she wrote Bitter Friends, Bosom Enemies: Iran, the US and the Twisted Path to Confrontation (2007), and as a senior fellow at the US Institute of Peace.
Paul Salem
Vice President for Policy and Research, Middle East Institute
Paul Salem (moderator) is vice president for policy and research at the Middle East Institute. He focuses on issues of political change, democratic transition, and conflict, with a regional emphasis on the countries of the Levant and Egypt. Salem writes regularly in the Arab and Western press and has been published in numerous journals and newspapers. Salem is the author of a number of books and reports on the Middle East, including most recently Broken Orders: The Causes and Consequences of the Arab Uprisings (Beirut: Dar Annahar, in Arabic, 2013) and "Iraq's Tangled Foreign Relations” (Beirut: Carnegie Middle East Center Report, December 2013). Prior to joining MEI, Salem was the founding director of the Carnegie Middle East Center in Beirut, Lebanon between 2006 and 2013.  From 1999 to 2006, he was director of the Fares Foundation and in 1989 founded and directed the Lebanese Center for Policy Studies, Lebanon's leading public policy think tank.